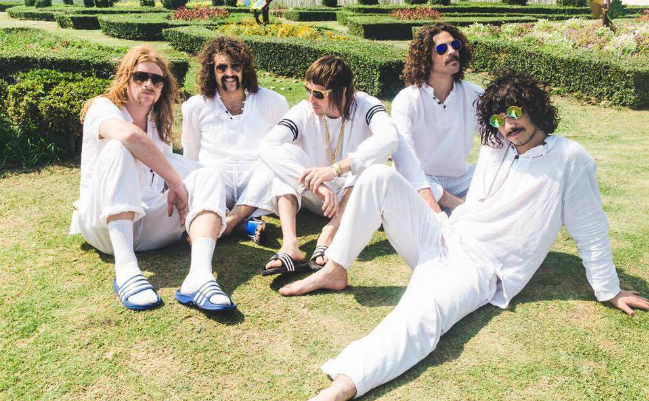 One of the 2016’s most anticipated album’s is here! Aussie rockers Sticky Fingers (STI FI) have dropped ‘Westway (The Glitter & The Slums)’, and the diversity within the album’s songs is insane! The 11-track album surprises you at every turn and we just can’t get enough! We’ve broken down the album in all its unique goodness as well as pointing out a few failings, proving STI FI are actually human and not a machine of indie reggae-rock perfection.

The album opens with One by One, a funky tune with a rhythmic guitar track and a slight ping. The slight distortion is reminiscent of an old radio’s quality, a nostalgic touch that carries you through the song’s twangy flow. The vocals in the chorus have a raised pitch which takes away from the smooth tone set out in the verses, a harsh transition that’s somewhat jostling while the lyrics are simple yet alluring “I said I’m sorry/ I know it’s not fair/ Look out my window to nowhere“. The song is pretty catchy and shows from the very first second that STI FI have altered their writing technique and bettered their already kickass style!

Up next is the album’s lead single Outcast at Last shows similarities to One by One’s flow but picks up the pace. Dark undertones, odd vocals such as a quick scream or low growl, and a whole lot of plucking, this song is so STI FI there’s literally no other way to explain it. Outcast at Last tugs at the remnants of the old STI FI style by having that out-there element that everyone has come to know and love from the Sydney 5-piece, but showcases a tweaked approach to their synchronised vocals and bizarre lyrical attributes.

“The addition of Remi’s brilliant rapping talents with Dylan Frost’s lyrical genius really brings this song full circle and makes for a dynamic collab that leaves you craving more.”

Sad Songs is introduced with some echoed strumming that’s slightly distorted before kicking off into an up-beat slightly U2-esque track, but it still sounds like STI FI. The song is as a pleasant surprise because it differs so much compared to the first two tracks but is definitely one of the best on the album. The exploration of instruments and expansion of confidence within their well-defined style is evident within the new album, with Sad Songs being the best example of this adventurous, new step in their career.

Sad Songs makes you want to dance, deriving its themes from STI FI’s authentic nostalgic style with a mix of modern indie-pop that gives it a uniqueness that’s sure to be a hit. It’s very fresh and enlightening, showing a new form of diversity from the fun-loving lads. Compared to some of their older up-beat tracks such as Australia Street and Clouds and Cream, Sad Songs takes STI FI’s raw energy and turns it into a massive hit that’s completely different to anything they’ve done before.

Angel takes a super slow turn with a heavy bass, showing a serious side of STI FI that’s both emotive and relatable, “How can you sleep when you drowned/ I messed around then I found it”. The guitar-driven ballad hums along to Dylan Frost’s rolling vocals while the bass remains a constant thrum pumping life into the atmosphere of the song.

Although Angel is a pretty sweet song on its own, it can easily get lost in the rest of the album, especially since the songs leading up to it are so unique and full of energy. The song feels a bit flat, with only a small rise and fall in range and a build-up in a particular part of the track that seems to go nowhere. It’s hard to understand just what the lyrics are as they blend into the buzz of the background sound and with STI FI being known for having strange sentences as part of their songs, transcribing a few lyrics of Angel was a difficult feat.

Our Town builds on an authentic soft-rock foundation with a steady rhythm and velvety vocals. The chorus has a dreamy element that takes you away to the place you’d rather be with a symphonic sound, and rolls seamlessly into a guitar solo that’s both funky and refreshing. The song ends straight after the last word of the track, feeling super short even though it’s similar in length to the rest of the album, which is a weird approach but definitely catches your attention. Perhaps STI FI wanted to make sure you were still listening?

The album’s title-track Westway fades in with a ringing string echo and quickly becomes a smooth vocals-driven song, captivating in the way it uses intricate little bursts of instruments to break up the light tapping background sound. It’s clear STI FI wanted to draw focus to this song by using such a different format to the previous songs on the album, painting a picture of what ‘Westway’ looks like through lyrics, “The cobble stone streets pave my way through the night”. The song ends somewhat abruptly compared to the way it started, losing a bit of the nice flow built throughout the track, but it’s super relaxing otherwise and will send your brain into a trance while you sway along to the rhythm.

Something Strange has a super spacey intro that’s closely similar to The Pussy Cat Dolls’ Elevator, and breaks away from the few mellow tracks beforehand. The psychedelic track is a welcome change that returns the energy the first three songs on the album worked hard to build up. The addition of Remi’s brilliant rapping talents with Dylan Frost’s lyrical genius really brings this song full circle and makes for a dynamic collab that leaves you craving more. The song shows similar characteristics to Dreamland from STI FI’s previous album ‘Land Of Pleasure’.

Keyboardist Freddy Crabs is more prominent in Flight 101 compared to the rest of the album, adding another level of diversity to the mix and creating a sparkling, hypnotic track that floats with an airy soundscape. The song uses delicate vocals and chiming keys to create a weightless flow of rhythm and levitates with blissful serenity, fitting for the lyrics, “I used to be scared of flying/ But now I want to”.

“…the song has a captivating rhythm that gives the hurried feeling of people trying to evade the rain while others watch from windows, enjoying the blissfulness of the sound.”

An erratic buzz and acoustic strumming lays the base for Amillionite, a bic lighter-raising worthy track that would make a great closing song to have listeners feeling warm and fuzzy in the wrap-up to a long-awaited album. Alas this is the second last song, but still brilliant in its own right with a minimalistic keyboard and rustic acousitc guitar blend…it’s like a warm hug from the band themselves.

Contrary to the previous statement, No Divide makes a brilliant closing song for ‘Westway (The Glitter & The Slums)’. Opening with the gorgeous pitter patter of rain and the tinkling of a piano, the song has a captivating rhythm that gives the hurried feeling of people trying to evade the rain while others watch from windows, enjoying the blissfulness of the sound.

There’s a fast, tapping tempo that sets the pace for the song, while Frost’s vocals are a rolling guide through the track. The instruments are soft and spaced apart, with little bursts of piano or guitar allowing listeners to focus on the thought-provoking lyrics. The track is so calm, using a small range to create a soothing mixture of beautiful music and brilliant vocals. This song leaves you with a super mellow vibe that’ll have you feeling relaxed and craving more from the quartet’s new-found style.

‘Westway (The Glitter & The Slums)’ showcases the incredible talent each Sticky Fingers members has, with each song ensuring everyone has time to show off their skills. Check out the Outcast at Last music video below and upcoming national tour dates below! 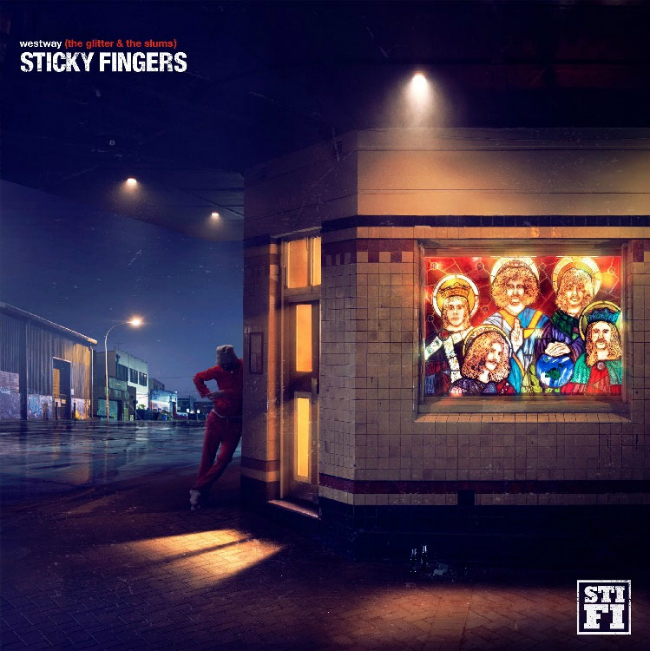