The weather wasn’t perfect for the 2016 Red Deer Festival, but the lineup was pretty close! Queensland’s scenic Mount Samson hosted 13 hours of feel-good music for punters dressed in their best 1950s outfits. The day kicked off with the dulcet tones of Charlotte Emily and her band of two. Paired with delicate instrumentation, her soulful vocals carried off a sweet pop ambience. With a sound similar to early Adele, each number comprised equal parts stealth and sugary sweetness.

Shimmering guitars and warm synth melodies kicked off Capre’s set. The chillhop inspired electronic tunes were enough to keep the crowd from running off to blast the air-conditioning in their cars. The highlight from this duo was their sober and impressively original cover of Hang Me Up To Dry by Cold War Kids. Inkaza’s easy reggae rock style made a strong impression, jolting the crowd from an electro-pop-induced reverie. 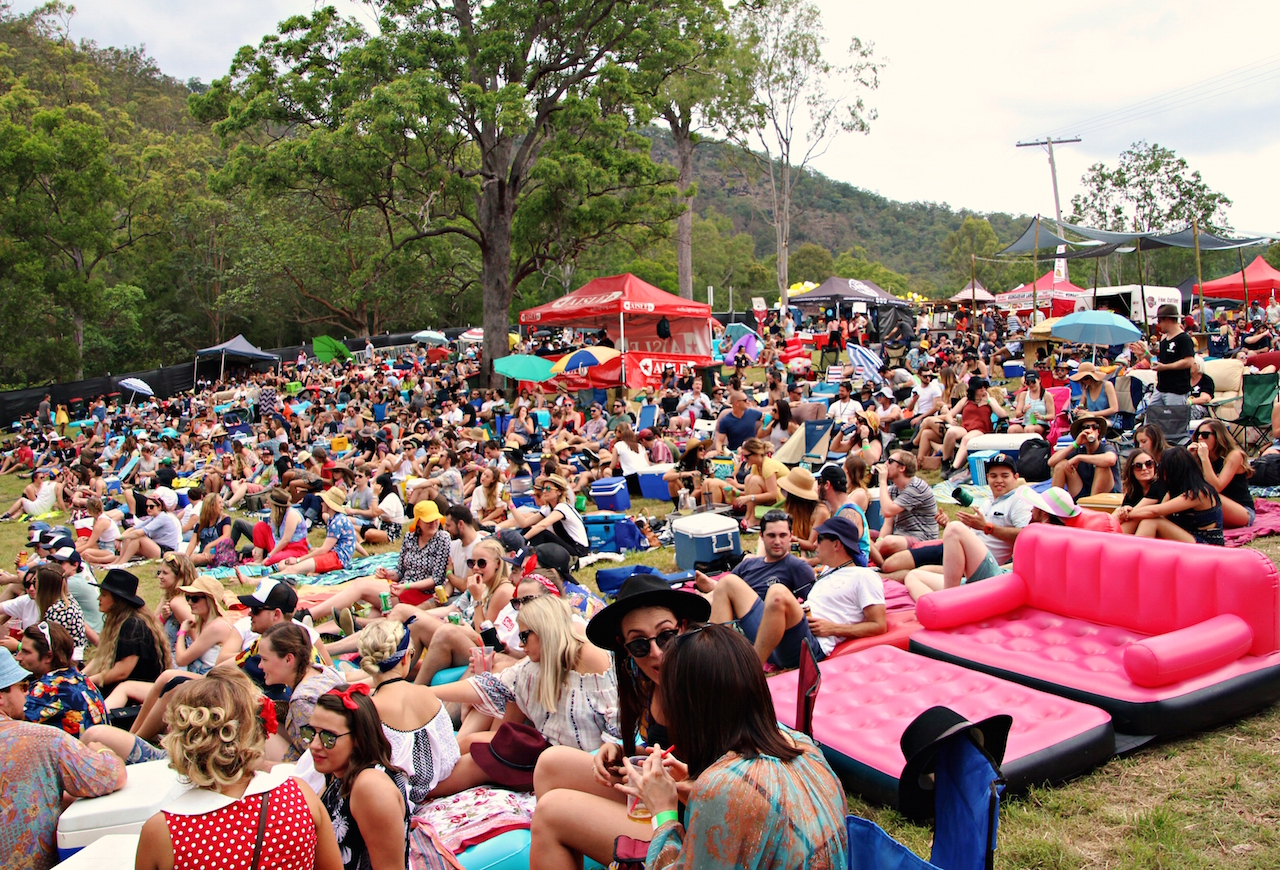 Fresh electric guitar riffs, steady vocals, and plenty of stage chemistry were a mainstay, with a few epic raps featured halfway through the set. Much to the crowd’s excitement the tracks maintained energy and intensity, drawing a string of punters down to the front to dance.

Brisbane songstress Maja followed Inkaza to keep the crowd cool. Their syrupy voices drifted up through the mountains, layered with loungey harmonies as the festival site filled up with couches and rugs. Beneb’s psychedelic bass and heavy guitar riffs drew an energetic response from the crowd, their strong vocals the final piece of an anthemic puzzle.

A cluster of girls with hula hoops danced by the front of the stage, energising the band with their enthusiasm. Sundown Jury launched straight into lively drum beats and electronic harmonies overlaid with warm, relaxed acoustics. Meanwhile, crowds of sun-soaked dancers flocked towards the stage.

The Counterfeit Umbrellas brought an instant energy boost to the stage with upbeat bass rhythms and stratospheric electric guitar. Their voices started off shaky, struggling to keep up with their own adrenaline and the pressure of a driving beat, but their energy and passion brought the stage to life. With a sound like Mumford & Sons, the contrast between boisterousness and subtlety made for a naturally captivating performance.

Dark Nile and Firedrakes teamed up with four traditionally dressed belly dancers to give the crowd a breather, and in true camping spirit, the enchanting display was followed by ever-dignified sack races. Mar Haze created an aural experience full of contrast, breaking up thrashing around the stage with pure falsettos that got the crowd cheering. The energy of their set translated through the ground vibrations, and as a sizeable crowd gathered by the stage, frontman Pat Kelly declared, “I think we’ve found our new favourite festival!”.

After the visual glory of Fashions on the Field, featuring rockabilly outfits, cardboard cars, one-half of Daft Punk, buckets of popcorn, and hot dogs, The Hi-Boys brought the music back in fine form – 50s-inspired tunes featuring Elvis-style screams and double bass blues riffs. Dry country-style guitar twanging and plenty of snares dominated the dusk air, and the band danced harder than anyone in the crowd.

Beats shook the ground for miles around as Owen Rabbit took the stage, leaving the crowd in a state of confusion and anticipation. He stood at a synth desk wearing an expression to match the intensity of the opening track, and things only grew eerier as the set progressed. Cinematic synth melodies flooded the stage and surrounds, leaving the crowd entranced, but it was the breakdowns that kept everyone wide awake. The punters were constantly caught off-guard by sudden heavy beats, and as smoke billowed out from the stage, the performance drama reached new heights.

The Lyrical were full of cover tunes with one in there to please everybody. Their clean acoustics and feel-good beats had the growing crowd bopping along in the twilight. Their cover of Justin Bieber’s Love Yourself was a winner, outshone only by their take on Salt ‘n’ Pepa’s Push It. Opening with a heavy beat and killer riff, Go Van Go brought a faster, louder energy to the stage. Kick drums vibrated through the air, sending the massive crowd into a frenzy, and their heavy rock version of The Beatles’ Come Together proved an instant winner. 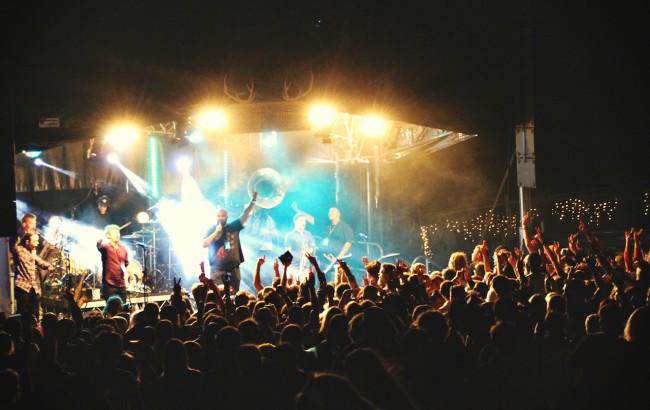 The night arrived with cold wind and patchy rain, but no one was game to miss BULLHORN’s unique blend of catchy bass, jazzy brass, intricate beats, and funky-as-hell rapping. The freestyle rapping near the end of their set sent the crowd into raptures, jumping over each other in awe. The Dashounds opened their set in style with a cover of Elvis Presley’s Hound Dog, following up their own brand of upbeat blues. Their distinctly indie-rock sound left the crowd warmed up and ready for The Jungle Giants’ headlining set. 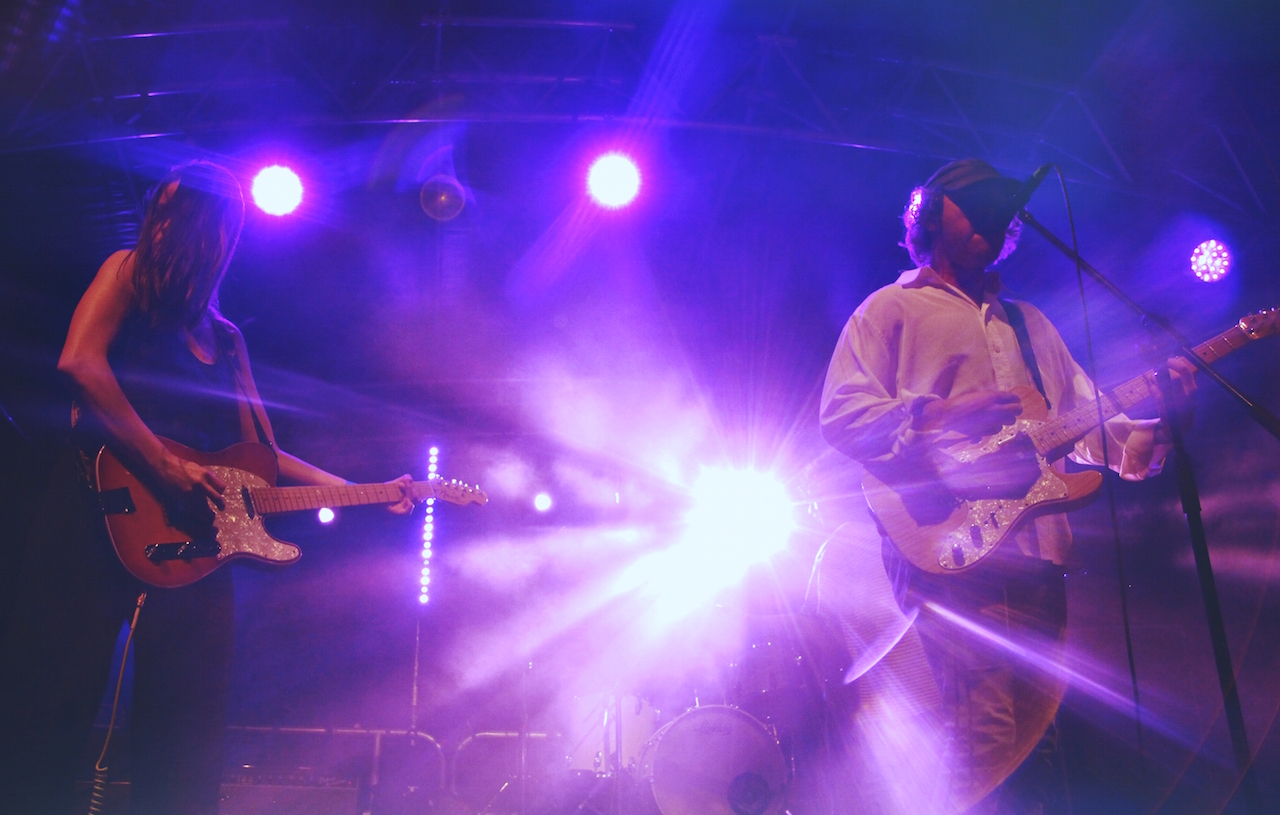 The alcohol had well and truly kicked in by the time The Jungle Giants appeared, met by wild cheers and a celebratory beach ball. Sharp strums, angelic vocals, and catchy beats filled the cool air as the crowd danced the night away. DJ Blake Thompson kept the crowd going between headliners with a mash up of modern pop hits, strong bass, and dance beats ever present, and before long it was time for Art vs Science.

The band couldn’t contain their excitement at playing the festival, and the combination of their fun music with the lights, the crowd, and the alcohol made for a massive energy lift. They held Parlez Vous Francais back until halfway through the set, but it was well worth the wait, and the night ended on a glorious high. 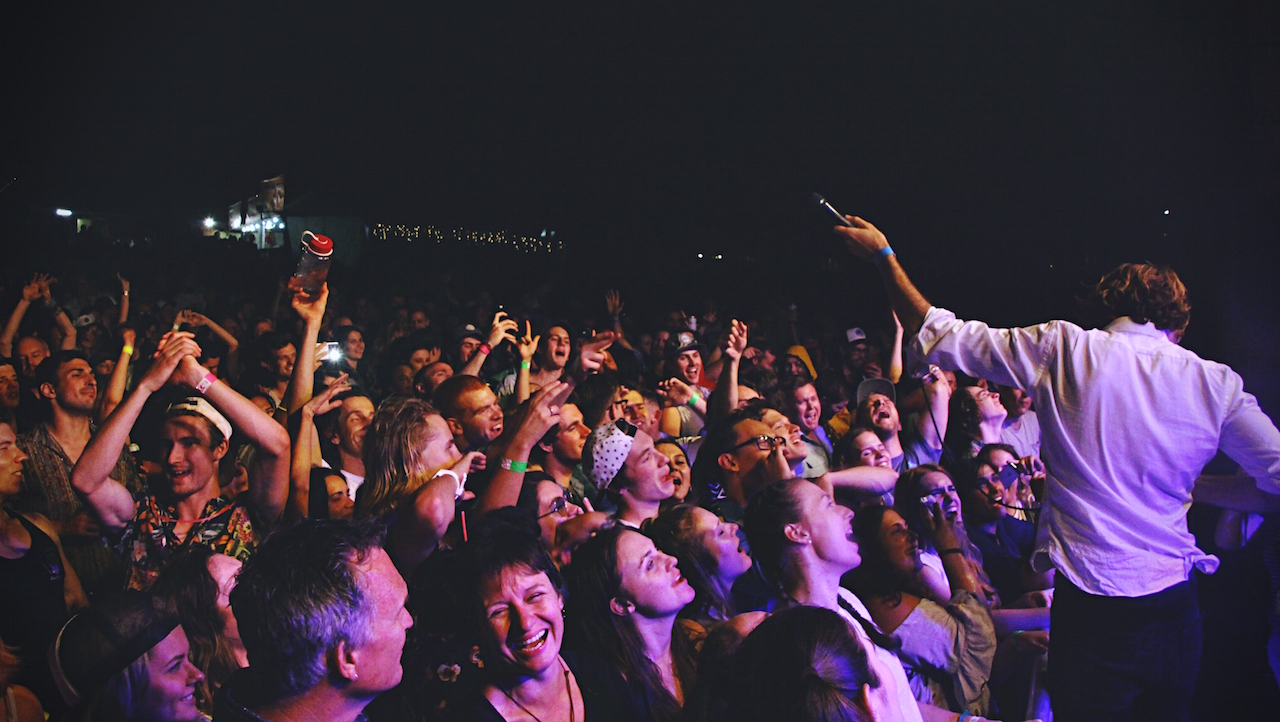 There’s no better place to soak up the good vibes of 13 hours of non-stop music than at Red Deer Festival!