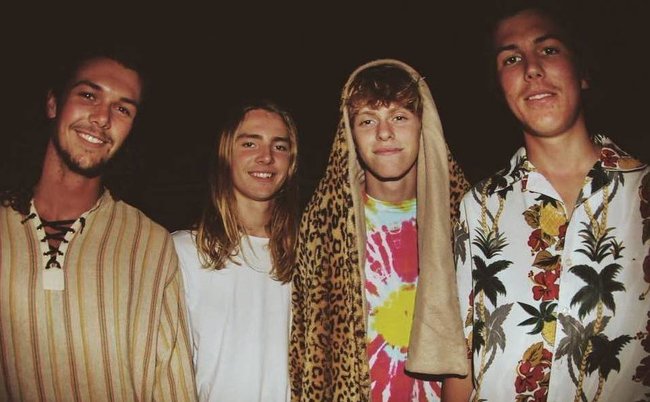 Gold Coast’s Peach Fur have been smashing it lately, with their funky fusion of reggae, psych, and surf vibes landing them opening spots for the likes of IVEY and Good Boy. With Shakafest coming up, we sat down with the guys to talk about what we can expect from their set, skateboarding, and what they’re most looking forward to from the festival

When’s the best time to throw a shaka?

The best and most appropriate time to throw a Shaka would have to be when one reaches a state of total stokedness.

When’s the worst time to throw a shaka?

When the cops pull you over.

Apart from shaka-ing, how do you express you’re having a good time?

Skipping for extended periods of time and giving out smiles.

If you were responsible for setting the dress code for Shakafest 2016 what would you make mandatory and what’s prohibited?

Then it would be a throw back in time!

On a scale of zero to Tony Hawk, what is your skateboarding ability?

We’re all pretty good at skating, i’d probably have to rate myself around Anthony Eagle

If you had to make a new skateboarding trick what would it be and what would you call it?

For the uninitiated, how do you describe your band’s sound and live show?

A Rock ‘n’ Roll froth pocket of rainbows that shoots only the best sound waves into your ear holes.

Why should punters at Shakafest 2016 check you out?

We’re local to the Gold Coast and we like rocking out on stage as much as fat kids loves cake.

What are three things people should know about your band?

1. We’re all decedents of an ancient clan called the Peachfurians.

Lastly, what are you most looking forward to about Shakafest 2016?

Jamming out on stage then watching our local lords Lotus Ship, Trapdoor, Ivey, then seeing Dunies, Drapht and Spit Syndicate spit some fire. As well as checking out the Shredders for the skate comp! Yew!