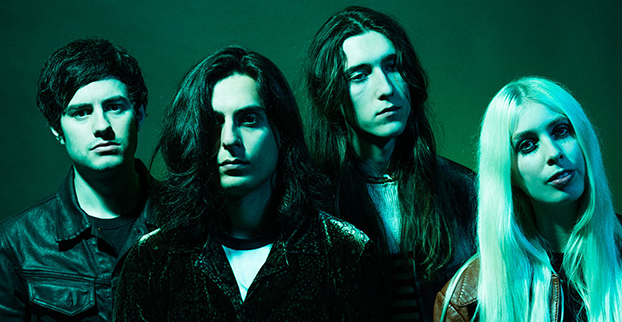 South London’s INHEAVEN aren’t here to change the world. Much like how Stranger Things repackaged some of the best things of a certain era with modern sensibilities and production values, INHEAVEN wear their influences proudly on their sleeve. They’re open and forthright about many of their inspirations, the Jesus And The Mary Chain resemblances are clear while the My Bloody Valentine connection is a little more tenuous. Vultures feels like it was written to see what it would be like if the band wrote a Black Sabbath song in their style. The resemblance to The Who’s My Generation at the centre of debut single Regeneration’s lyrical chorus hook is more evidence that this is a band with their eyes firmly set in the direction of the past. At times it almost feels like some sort of game where you’re being challenged to recognise the references on a literal level.

Not all of the comparisons are favourable or chic ones though. They may be less happy to admit to a resemblance to The Vines (Treats, World On Fire) or that brand of anthemic indie music that The Vaccines began flogging to death in 2009 (Stupid Things, All There Is). Bitter Town is one sure to please fans of The Killers. There’s inevitably a shared heritage with those bands and I’m not suggesting they were direct influences, but it’s in the safe production of this album that there’s a similarity in their blandness.

This is a band who have had remarkable good fortune from the very beginning with Julian Casablanca’s label putting out their debut single just one year after formation, subsequently resulting in British national newspapers covering this band with just four songs to their name. The result was a slew of festival slots, hype and expectation for the band’s debut album. They tempered the pressure of the resulting debut album with a slow, but steady release of a number of singles and two-track EPs which comprised most of its tracks. It must be daunting to have such level of interest before having put their debut out there, but this clever approach gave them the option to drop tracks that didn’t receive the expectant buzz when released in isolation.

That’s not to say that this is a bad album, per se. Frontman and main songwriter James Taylor has a great knack for songwriting that makes this album hugely listenable. Though the album lasts just 39 minutes, it covers a wide array of styles contained within a sonic similarity that gives them a signature sound of their own. The octave separated male / female vocals is a tried and tested pairing that The Raveonettes have built an entire career off the back of and in songs like Real Love it’s put to good effect. Do You Dream sounds so full of 1980s teenage angst that you almost visualise the non-existent movie that it soundtracks in your imagination. This is the perfect sunny-afternoon festival band, the high energy that underpins most of their music sounding like it was built to accompany a hundred sunny days.

Lyrically they’re not afraid to make their political leanings clear. World On Fire pulls no punches when focusing its ire on Donald Trump while Baby’s Alright calls into question America’s foreign policy. It’s strange that the political angles are all based on the opposite side of the Atlantic to the band themselves, particularly when British politics is as on fire as those in the USA in the era of Brexit. It’s also unfortunate that this anger isn’t backed up with anything particularly insightful or memorable, rather a series of forgettable clichés that feel uninspired.

“I don’t want to remember this / You’ve left no future for your kids / Promised change, said we’d be okay / We’re suffocating, I feel let down“

They get the point across but in a way as inspiring as the contents of a Christmas cracker.

INHEAVEN are one of those bands who if you take them on their surface level are catchy, memorable and bring to mind so many great artists. They write songs which make you want to move and sing along to their choruses. The production infuses everything from Joe Santiago’s guitar sound to a flange revival which calls back all of the best elements of the 1980s. However once you start scratching away at the surface, there’s not much more to it. It’s the sort of music that’s hard to dislike but simultaneously hard to get excited about. A band you wouldn’t turn the radio off for, but one you couldn’t imagine being anyone’s favourite either. There’s nothing here to suggest that they won’t end up churning out album after album in this acceptable style to a shrinking number of fans with each release. Instead, for their sake, I hope they end up digging deep and surprising us all.