Portlandian surf rockers Guantanamo Baywatch are Down Under for the next two months in support of a new album, celebrating an extra guitarist, and fostering an enormous sense of excitement to tour their second home once again. We asked the band’s bassist Chevelle who are the real baes of Baywatch and what you need to know about their upcoming East Coast tour!

Who was the ultimate babe on the Baywatch TV series?

It comes down to Hasslehoff vs. Anderson (Lee). On one hand his late night drunken-floor-cheeseburger-ramblings are amazing, but Pamela really paved the way for celebrity sex tapes (you know Tommy Lee drives a boat with his boner?). Pamela wins!

You’re cruising the beach enjoying the sun and someone comes along to kick sand in your face, what do you do?

Fart on their nose!

In the event you’re at the beach in need of saving, which member of Guantanamo Baywatch would you like coming to your rescue?

None of these guys could save me and I’m pretty sure they’d just pretend they didn’t see me drowning!

With the new Baywatch movie on the horizon, who has more hunk appeal: David Hasselhoff or Dwayne ‘The Rock’ Johnson?

THE ROCK, because he’s a perfect human god scorp king.

What activity in your life would be best viewed in slow motion?

David Hasselhoff is clearly a symbol of Baywatch, so which are you a bigger fan of: Baywatch or Knight Rider?

I can’t say no to a crime fighting talking sexy man-car!

If you could redesign the Baywatch leotard, what would it look like?

For the uninitiated, how would you describe Guantanamo Baywatch’s sound and live shows?

We’re loving Too Late, what’s the story behind it?

We shot this video to explain the story behind Too Late with our bud Brett Roberts who makes vids for our friends Mean Jeans and Long Knife. We built a buncha the stuff and spent tons of time green screening and it was sick!

Lastly, what are three things we should know about Guantanamo Baywatch? 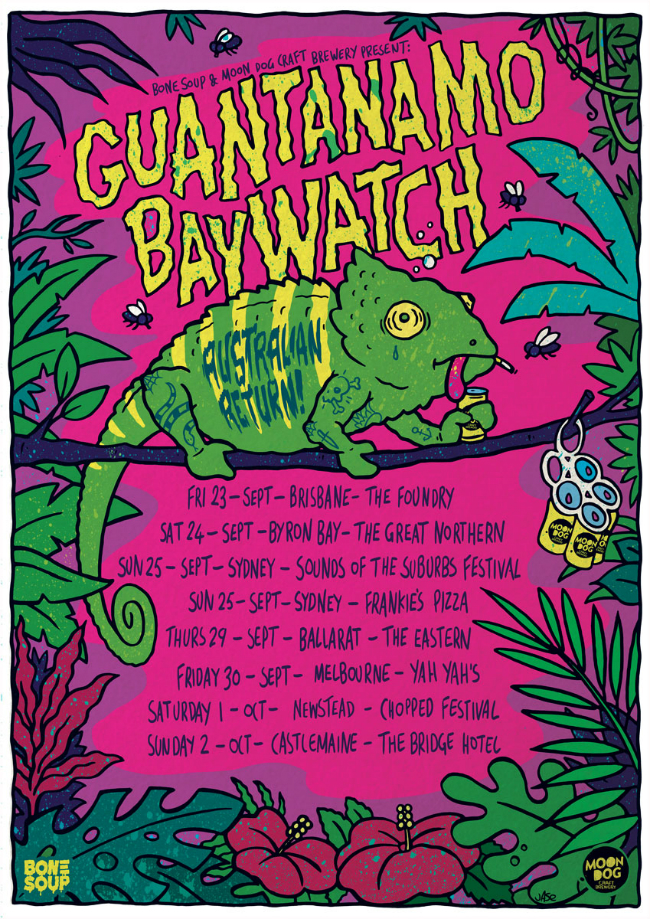