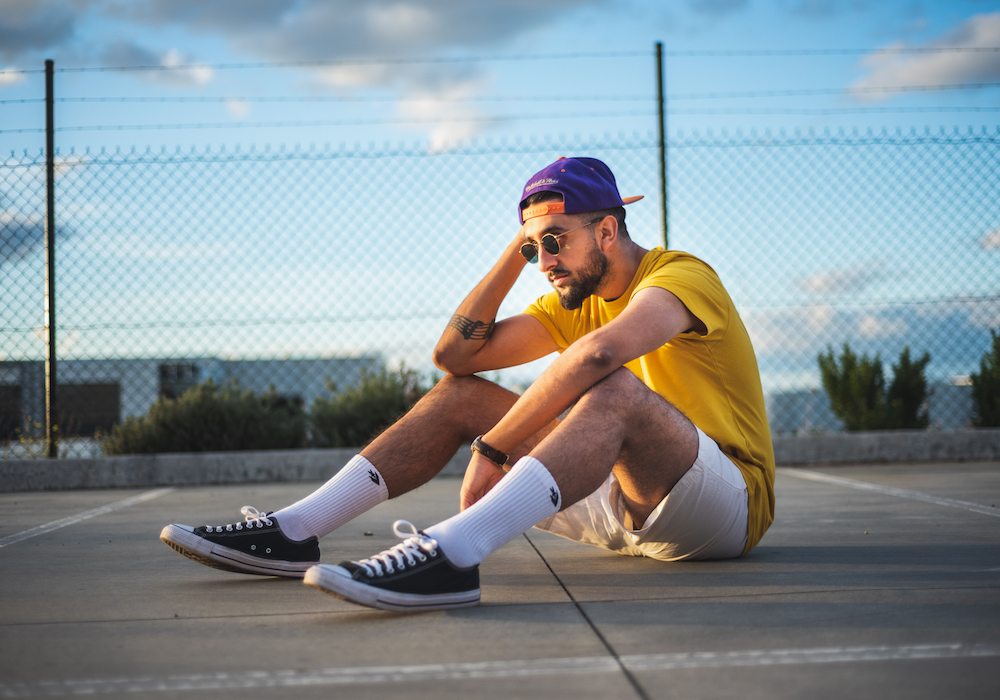 Melbourne-based rapper DL has returned with his latest heartening single ‘LOVE’ ft.Nathaniel – produced by SB90, and mixed by Charles Daly (Amy Shark, Allday, Mallrat). We sat down with DL to get the story behind the tune and more!

Congratulations on the release of your new single! Can you go into depth behind its meaning for us?

‘LOVE’ is the proudest release for me to date. I’ve been inspired by a woman and now two beautiful daughters from that love. I wrote the verses about a woman I was infatuated with, and that infatuation became love and my wife. The hook came to life, and we let the lyric speak for any type of love. I love that it went to a place of more than just a love between lovers. The song went on a journey and gave an additional beautiful meaning to me and the featuring Nathaniel, as we both have young children. My eldest daughter (who turns 3 on release day) was recently diagnosed with Type 1 Diabetes and has shown a strength that you wouldn’t think a child is capable of. As parents, our love is off the scales and there’s no better time to release this song on a personal level. My daughter even features at the end of the song, which is super cute! Oh, and my wife even appears in a backing vocal or two!

Was there a large team behind this track? Who contributed what?

I pieced the music together with Melbourne producer SB90 who was on the same page as me the whole way. I love working with him. We involved Nathaniel and Lars Jensen in the writing, and Nathaniel is obviously the feature.

I’ve got some great choir backing vocals in there too from some talented local artists James Franklin and Rowie J. My wife too! She goes alright on a tune, and I wanted her to be a part of the record that was inspired by her.

Can you tell us what or who first allowed you to create, whether it was a role model growing up, or a moment from your childhood?

The pop influence in my music comes from Pop always a part of my everyday life from listening to the radio and watching music video’s; I enjoyed how pop music made myself and other people feel. Growing up more, I leant towards R&B and Soul; I enjoy listening to this kind of music the most. In high school, I’d watch the talent quests from afar, until year 11. We decided as a group to do it. Next minute, we’re on stage performing ‘The Next Episode’ by Snoop and Dre, and we took out the best vocal group award. I scratched the itch I had to perform; the only thing is, I love scratching too much to want to stop!

Who would you say has been your biggest influence on your sound?

The biggest – I’d have to say Snoop Dogg and Big Sean. I always likened my sound to the more laid back, and not in-your-face kinds of rappers. More recently, I’m definitely influenced and found myself resonating with Macklemore and Ryan Lewis’ music. I think we have similar influences in terms of genres and artists. I’m like the Indian Big Snooplemore.

Many people believe love is complex and layered, while some people say it’s the simplest thing we can do. What’s your thoughts on that?

Ok, let me get a bit deep on this for a minute. I’m very passionate about this. I think that ‘love’ is a simple thought. It’s easy to love for some, it’s hard for others. There are different types of love that come from different spots of the heart. In my personal experience some of those loves are easy; like loving your children (or your favourite burger lol). Other loves can be super complex, and that kind of love sometimes needs to withstand strain and challenges; that makes the little things so important. Awareness and compromise is everything. It makes a successful love and partnership complex and intricate, but incredibly powerful.

What’s on the cards for DL this year?

LOVE is my 2nd single from my upcoming EP project. There are a couple different parts to this release which I’ll share soon. I’ve got a really cool video project planned as part of the next release and following that campaign will be the EP. Closer to the EP, I’ll be getting out there (Covid dependent) to do some shows and be a part of some cool events in the works. I’d love for NZ to be a part of my plans. I pushed the first single there, and it did quite well and hit some radio. I’ve secured an exclusive radio premiere there on a major station, and fingers crossed I can get over there at some point.