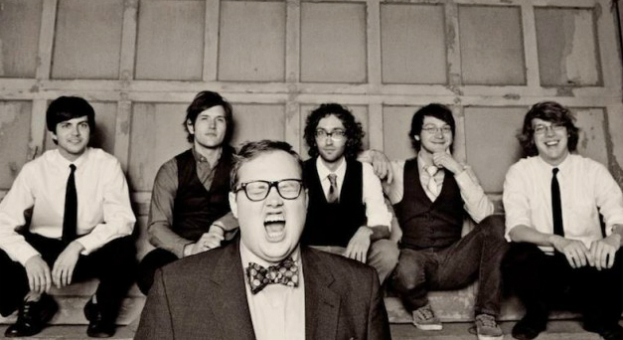 Alabama soul-rock outfit St. Paul & The Broken Bones are touring Australia for the first time, in support of releasing their debut album ‘Half the City’ (out March 18). St. Paul & The Broken Bones have a huge following around the world and have played at Lolapalooza, Coachella, and opened for The Rolling Stones. We had a very entertaining and insightful chat with lead vocalist Paul Janeway about ‘fun church’, singing like it’s your last day on earth, opening for The Rolling Stones, and how to make an album breathe like a human.

Where does the name St. Paul come from?

That was actually our bass player (Jesse Phillips). We wrote a lot of the songs for ‘Half the City’ (together) and he for some reason wanted my name in the band name and I didn’t. I don’t drink or smoke, and I grew up in the Church, and so they thought it would be funny to call me St. Paul but I don’t live up to it as much as I probably should.

No, that’s cool! So you said you grew up in the Church… Did you do much singing in Church growing up?

I sang a lot. I started singing when I was four years old in church and it just kind of stuck with me. I loved everything about it. When the doors were open, I was there and we had a good time in Church. I called it ‘fun church’. It’s such a part of our show and part of our persona too.

Would you say the church is still a part of your life, and a great influence in your music?

I wouldn’t necessarily say it’s a part of my life now but it’s definitely been influential in the way I sing and the performance aspect. What I really wanted to do was be a Preacher, I wanted to do that since I was young. And so they would let me preach on some nights. What you really learn in that situation is how to read a crowd and if you’re losing them, you pipe it up a little bit. It really taught me how to perform in a way that was flamboyant, loud and attention grabbing.

All your performances have so much explosive energy! It’s incredible to watch. Where would you say this energy comes from? Have you always performed this way?

Well the thing is it’s kind of a chicken and egg situation because I’ve always performed that way but I don’t know if it’s because of Church or, you know what I mean? When you’re singing in Church you think you’re doing it for a higher power, for a bigger reason than yourself. So there’s this sense of urgency. You sing like it’s your last day on Earth, like this is the last song that’s ever going to come out of my mouth. And you better mean it! It better not be something that’s half-assed. That’s how I do this music thing. It’s exhausting! (laughs) But it’s how I do it. I can’t do it any other way.

That’s fantastic. What was it like opening for The Rolling Stones last year?

It was surreal. What’s funny is, I know this is bizarre and people are like “really?” but it’s totally true… I didn’t grow up listening to The Rolling Stones. I grew up listening to gospel music and a little bit of soul music. That was it. I didn’t grow up listening to The Rolling Stones, The Beatles, or any of that stuff so for me, obviously I became fans of them later in my life, but I didn’t have that same kind of nostalgia for it. I knew it was a big deal and I know it’s a big deal. Some of the guys in the band were just like “this is it, this is the best opening gig you could possibly get” and it was a great honour. I had really great interactions with all of them. We all love music so we nerded out about music a little bit. It was a really remarkable thing to play a football stadium full of 60 thousand people.

Your debut album ‘Half the City’ was recorded live to tape in around three takes. Why did you record your album this way?

Just to see if we could it honestly! That’s how a lot of people did it back in the day. But I also think those old records, you listen to them and you think those little bruises and not perfect notes are part of the charm. It makes it human, it makes it breathe a little more. Perfect is so overrated in music. We just thought we would try and see if we could do it.

That’s amazing and you did it!

I guess, I don’t know! There are parts I’d probably disagree with you on but we did make the record. It’s done pretty well for us so I guess we’ve done something right.

Who are the biggest influences behind your sound?

Well it’s funny because we’re talking about our record ‘Half the City’ which we made February of 2013, and we just finished our new record. It’s a really interesting thing to think back because they are completely different records.

Why are the two albums so different? Has something changed in your life, or in the band between the first and second album?

I think for us it was a situation where… um… well I did get married. That is kind of a big event. So I should say that as a writer I couldn’t write another record about heartbreak and sadness which the first record has a lot of. Its not a really happy record. The new record is more spacey, just different. I think as an artist you have to evolve. If we made ‘Half the City 2’ it would be like “well, that’s all we can do creatively”. I think there’s more to us than that.

What can audiences expect on your Australian tour this month?

I always say it’s kind of like Sea World, the first couple rows are probably going to get wet! And we’ll sweat on you… It’s going to be a high energy show. I have a take-no prisoners attitude when it comes to audiences so you either want to be into it, or you’re gonna really hate it. We’ll be doing a lot of ‘Half the City’ stuff of course because we’re releasing it there. But we’ll be putting in some new stuff as well. The new record probably doesn’t come out till the fall, at least in the States, so we’re still trying to work our way because they’re kind of difficult to play live. But we’re going to see how Australian audiences like the really new songs. It’s going to be all new to them because we’ve never played there. I’m excited. I’ve heard Australia’s beautiful and wonderful and (there are) things out there that want to kill you. It sounds adventurous and fun and I’m excited.