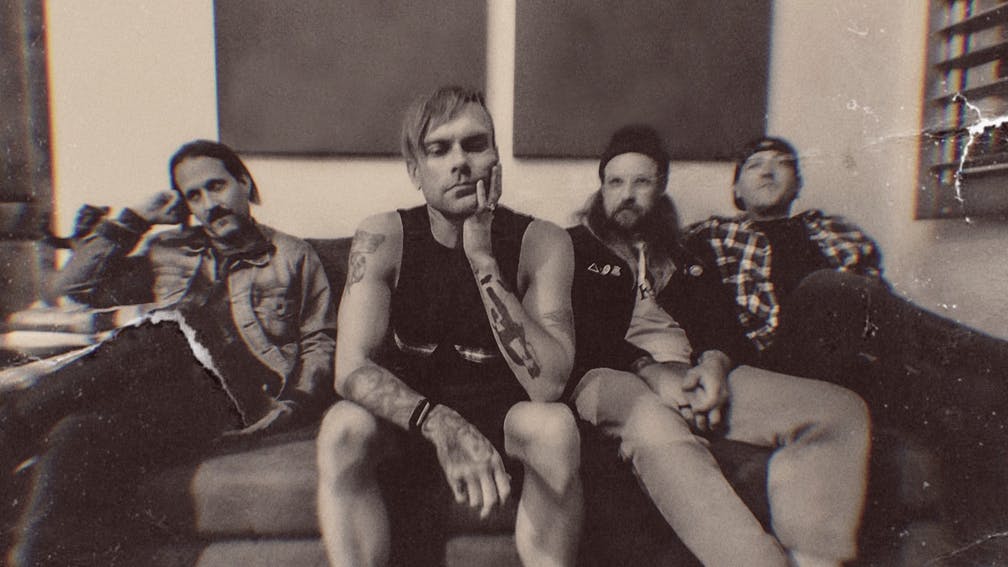 The Used’s super anticipated 8th studio album “Heartwork” is set for release on April 24th following the already released singles Blow Me featuring Fever 333’s Jason Aalon Butler and Paradise Lost. The album also hosts guest to Caleb Shomo of Beartooth and Blink 182’s very own Mark Hoppus and Travis Barker. Lucky for us we got to chat with front man and vocalist Bert McCracken to give us a bit of insight into and behind the new album.

Your new album Heartwork has a little over a month until its release, what was the writing process like, was it different in any major way compared to previous records?

It was very different but very similar to the first couple of records in a kind of exciting and carefree way. The joy of being in the studio and making music it felt like 20 years ago but the process was a really crazy relaxed–way more relaxed than you might imagine. We would get together a little bit later on in the afternoon and have coffee and talk about what we wanted to write a song about and just start riffing ideas and by the end of the day we have a fucking song (laughs). That’s how the whole record went and it was just an absolute joy, everybody was in a good mood, nobody was talking shit, everybody’s ideas were completely valid and important. It was some of the best times, if not the best time I’ve ever had making music, it was amazing!

Were there any big inspirations or concepts behind this new record?

We only had one sort of rule in the approach. Beforehand when we were making demos we had this big over-elaborate concept of this boy who’s grown up the past 18 years who’s been personified or anthropomorphized into what is The Used. The only rule was to say yes to everything and to have fun with it so that’s exactly what we did, say yes the whole way through. No need for concepts, seems like the story wrote itself once we started it. It was really back to I wanna feel something on this record, I wanna dig deep and feel what it feels like to be this age, this time, the place. This is for the hardcore music fan, the people who listen to music to answer a question or two about themselves.

Did you face any challenges in the process of creating this record?

I guess saying yes to absolutely everything felt like a little bit of a challenge. Usually I’m very protective about lyrics and about my creative process in general so having everybody’s input at all times was amazing and I think that it worked really well and for what it was it was beautiful, but also very challenging for me to let things go–you know like Elsa would, I have two daughters, my whole life is ‘let it go’ (laughs).

Do you think any of the tracks on the record would come as a surprise to any long-term fans?

Hmm that’s a good question, I think the real hardcore Used fans would expect for us to be very daring and bold and willing to explore all aspects of music to a certain degree but they might be a little bit surprised by how heavy and how pop-y and how drastic the dichotomy is between light and dark on this record. I think that there’s songs all over the place and it’s kind of genre-less in my opinion. There’s pop punk songs, Warped Tour pop punk songs, dance party club jams, true hardcore head banger songs, it’s all over the place and I think that’s really what we wanted.

Paradise Lost is the second single to be released from Heartwork, can you tell us a little bit about that track?

It was the first song we recorded and during the beginning parts of making the record we knew that we wanted to have something that resonated with our love for 90’s grunge music and that rock n roll I grew up listening to when I was a wee teenage lad. Nirvana was one of my favourite bands of all time so it’s hard to stray far from that influence in my life. The first day we got together, we were all so excited and this riff felt like the perfect starting point for the record and the perfect step in the right direction.

I’ve been obsessed with John Milton for a couple of years and if you go on YouTube there’s a Yale college course series on John Milton and his life and its goes through all of his writing, there’s about 30 hours of it. Paradise Lost is a poem about Adam and Eve and the devil’s temptation, but Milton’s point of view is that it was a metaphorical device to talk about his failed revolution with the church of England at the time. The planets in the perfect state to talk about failed revolution now especially with this glooming pandemic clouding everybody’s good times

You wrapped the north American tour not too long ago and were able to play the new songs live, how does it feel playing new songs to the audience compared to older material?

Really good! Sometimes you rehearse new songs when you get a record finished and the songs still a bit sticky or rough to get through but then you slowly sink into them. When we first started playing Blow Me and Paradise Lost they felt like songs we’ve been playing for years. Blow Me hasn’t been out that long but now the crowds singing out all the words it’s a really cool feeling

What’s next for you guys, what’s in the works after the release of Heartwork?

Just going to stay at home to hangout. w\We figured we’d put a record out online and we’ll just stay at home and see what happens. For the next foreseeable future, everybody is staying home. I think if it starts to feel too dark just to remember you cannot kill live music, we will be able to go to shows soon enough, we’re just going to have to wait it out and everything that was going to happen will still happen, still really exciting news, just gotta keep your hands clean.