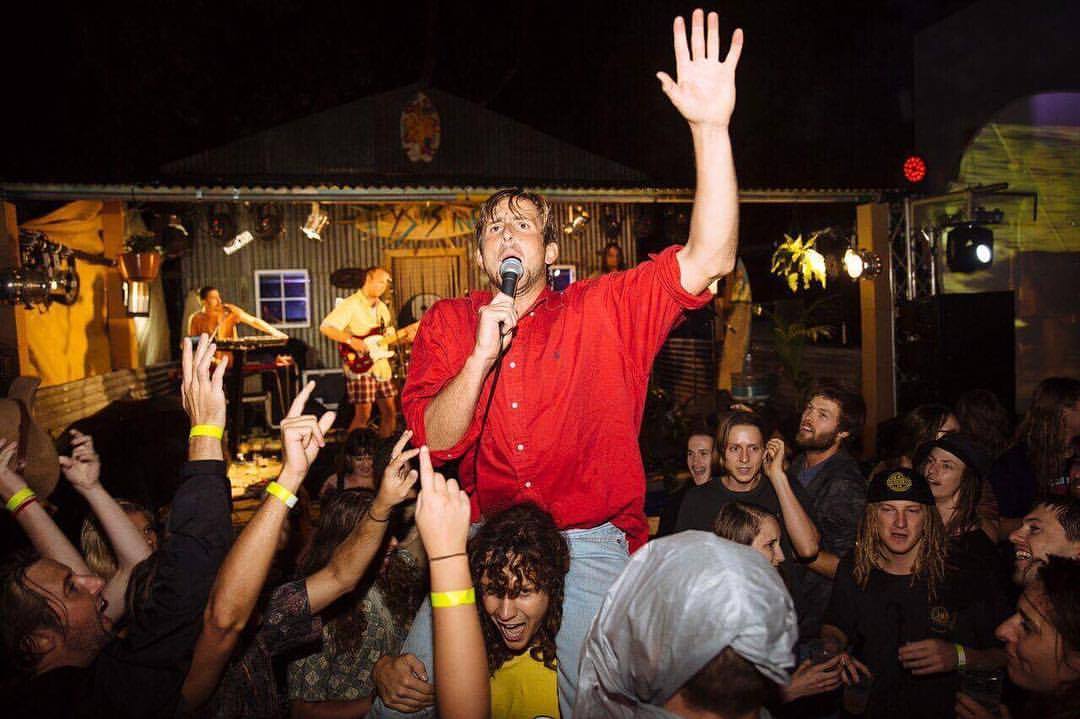 The Gold Coast’s very own Burleigh Brewing Co was home to the first year of Hey Sunshine Festival over the weekend. Although the name suggests an afternoon of beautiful skies and balmy weather, the crowd was instead treated to torrential rain for the most part of the evening.

Despite the average weather, no one seemed particularly phased with many embracing the rain or improvising with garbage bags kindly donated by the bar staff. When you combine a huge selection of beers on tap and some stellar live acts, no weather conditions are going to be dampening the night.

The outdoor stage was set up to represent some kind of surf shack/garage including hanging ferns and surf boards pinned to the make shift walls, with no sign of the rain subduing local act Peach Fur took to the stage supplying us with their pop-rock tunes, playing tracks of their ‘Pleasures & Necessities’ EP such as Days Go By and Glimmer and an impressive cover of Arctic Monkey’s Florescent Adolescent they closed their set with a new track, their live set was a promising indication as to what’s to come for the band.

Next up were three piece The Cinema Wristy’s from Byron, kind of like a surfy version of Black Sabbath, they had a distinct charisma to them as they played songs like Seventeen, despite the pouring rain the three piece managed to maintain full sound throughout their set, it would be nice to see these guys in a bigger room. As each band played their set it was projected onto two large screens on either side of the stage, layered with surf clips from Wade Carroll and Tyson Lloyd.

By this point the rain had almost come to a complete stop and it was time for Sydney’s Borneo to take the stage. The crowd was ready to dance and the Borneo boys were ready to provide the tracks to do so, bringing a lot of fun and energy through their catchy tongue in cheek lyrics in songs such as Hold Me in the River, Alert! and, my personal favourite, Boyfriend. They closed their set with the much loved track, Eating Animals—getting full crowd participation throughout their set, it was the perfect soundtrack to start off the evening.

A quick break between bands and Thunder Fox were up, bringing with them some funky tracks including Ride and off their latest EP ‘Mother Machine’. They performed Vanilla Chinchilla which had a hip-hop influence featuring a saxophone and trumpet that worked consistently throughout the set, turning it up and pulling it off with a Rage Against the Machine cover Killing in The Name. Thunder Fox were slightly different but totally likeable.

The crowd started to fill in just as Bootleg Rascal were about to begin, treating the crowd to tracks such as Overflow. Playing crowd favourites Oh I know and Asleep in the Machine had everybody dancing and singing back to the trio, bringing energy to the atmosphere their set was the perfect transition into The Belligerents with the crowd more than ready for the Brisbane bands first festival headliner show.

Their set would also serve as the first live taste of their debut album, ‘Science Fiction’. Opening with Sorry To Say, frontman Lewis Stephenson begun performing his signature quirky and quite iritic dance moves, between his guitar and mic with high pitched harmonies mixed with their refined psych-pop sounds. The album translated from record to live performance fluently as they played tracks such as Flash and Before I Am. It seems that the audience has received the new tracks well, singing back the opening lyrics to title track Science Fiction and Caroline. Whilst the focus of the set remained firmly on their debut album, they took us back to 2015 with the timeless In My Way serving as the end to what was a delightful evening.