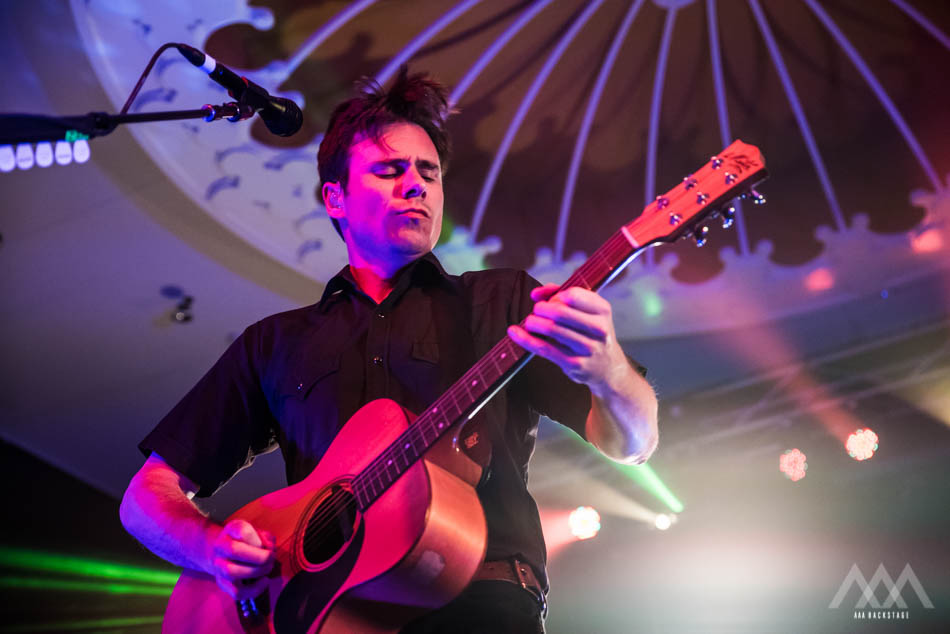 The last time I saw Jimmy Eat World was at the Reading Festival, the year after ‘Bleed American’ had propelled Jimmy Eat World to popular peaks they would never again obtain. The wallet chains flayed wildly as the crowd locked their bleached tips as was the style that year. It was the highlight of the festival for me, covered in a mixture of multiple people’s sweat that remained unwashed for days. Middle class white boy rebellion in its purest form.

Since then the band faded from my mind. The follow up album ‘Futures’ had good moments, but tread over similar ground. Emo was falling from grace, the saccharine elements of Jimmy Eat World that turned so many off them were being pushed further to the forefront. They had been relegated to the history books, defining a time and a place. It wasn’t until the positive response to last year’s ‘Integrity Blues’ that I was curious enough to give them a listen again, and I’m glad I did. Despite being 24 years into their career, written off by many as ‘that band which played The Middle which they play in Coles’, they had made something incredible. It still sounded unapologetically like them, but revelling in studio trickery to create something bigger than the four-piece meat n potato rock which they’d explored in every possible way to date.

As American Football having recently released a new album and Brand New acting as though their next one will be here any day, it was perfectly timed to ride the wave of the resurgence of emo. They’d managed to stick together through the unfashionable times and were ready to prove themselves worthy again. If only they could convince people that they have songs other than The Middle.

Trophy Eyes had a hard time of it getting the crowd warmed up. The sound levels were muddy, and their hardcore infused emo occupies the opposite end of the emo spectrum to Jimmy Eat World’s addiction to earworms. Regardless, this was not an audience looking to discover their new favourite band, this was an audience looking to reconnect with their youth. At The Drive-In could have graced the stage and those in the audience who’d never heard of them would have responded with a shrug.

A tall man front and centre seemed to know a large number of the lyrics and did his best to get things going, singing along with contagious enthusiasm. I wondered if he was a big fan of the band, or whether he felt additional pressure when watching bands being as tall as he was, knowing that his face would be unmissable within the thrall. The pressure of being the representative of a city meaning you feel obliged to only attend shows of bands you truly love. Combined with the abundance of people standing behind him, wishing his view-blocking mass dead, I felt for the guy.

The sell-out crowd gave Jimmy Eat World a rapturous entrance as a backing track played the un-recreatable intro of You With Me to the masses. The band took their places, the same four band members known as Jimmy Eat World since 1995 plus touring member Robin Vining hidden away at the back. As they readied themselves to kick in, the opening notes of Jim Adkins’s acoustic guitar sounded almost celestial as he strummed through his first chord.

As the set continued with ‘Chase This Light’ highlight Big Casino, I began to wonder if Jim Adkins had ever had had about a different hair style, or whether he viewed his side parting as some sort of magical force that encapsulated his song writing abilities. His visible enthusiasm couldn’t shake that hard divide of east and west follicles which always reminds me a little of Christopher Reeve’s Superman. What Jim gets up to outside of Jimmy Eat World is his own business.

The band ripped through a set of career highlights with rapid succession, choosing to play more songs over an abundance of audience interaction. Though the audience weren’t flailing the pocket chains like fifteen years prior, the shrieks and applause after each song reassured the band that everyone was having a good time, in that unmistakeably Sunday way.

Jim seemed to be looking through the audience for those visibly singing along, knowing the words. As I clocked him make enthusiastic eye contact with the guy next to me during I Will Steal You Back I realised the danger in me singing along to the chorus. Before I had a chance to disappoint with my lack of knowledge of the words for the verse, I reverted back to shuffling awkwardly along with the music instead, unready for the levels of responsibility the tall guy could muster.

It was a hugely upbeat set, favouring the upbeat numbers over any balladeering. Back to back relentlessness created an exaggerated intensity for the intro to Pass The Baby with its clear contrast. The mood settled during its brooding verses as it lead to its inevitable exploding conclusion of Rage Against The Machine sized riffs. Before anyone could take a second to savour those closing notes, the band launched straight into Just Tonight followed by Futures with barely a second’s gap. The heaviest moments of the set lumped together in a wall of guitars as even Robin at the back abandoned the keys for a six string.

It’s strange to think Tom Linton was once the lead singer in the band, Jim Adkins voice being possibly the most definable element of their sound. Nowadays his lead vocals have been relegated to a single song, Blister. The handover from Jim is slightly awkward, as he asks Tom to tell the audience what the song is about in a move that feels as though he’s reminding him who’s really in charge. As Tom looked confused and slightly annoyed by the sudden attention, Jim let the crowd know it was about deforestation. This is probably why they don’t have breaks between the songs.

While the ‘Clarity’ section of the set may once have garnered the biggest response, those shouting the lyrics of For Me This Is Heaven or their breakthrough hit Lucky Denver Mint were few and far between. However what they lacked in numbers they made up for with sheer enthusiasm.

The biggest response for the night, other than the inevitable, was for A Praise Chorus, which felt particularly apt given the song’s themes. Jim took the lyrics to a literal level, addressing the song to those on the peripheries, thrusting his guitar as he played to point to those at the back. “I’m on my feet, I’m on the floor, I’m good to go / All I want is just to hear a song I know / I wanna always feel like part of this was mine / I wanna fall in love tonight”. As the movement flowed out to the whole room it seemed to work. Unfortunately following it up with the gentle You Are Free instantly dispelled the energy they’d created.

Closing the main set out with three back to back songs from ‘Futures’ felt a little excessive, but there was no arguing with the impact of Pain as the closing number for the main set. Arms punched in the air with satisfied intensity as people shouted along with the chorus.

During the pre-encore lull, you could hear the few people concerned that they “hadn’t played the song yet”. Despite everything that had come before, they still wanted the song which soundtracks your local supermarket. Not ones to cause controversy, the band wasted no time in obliging. Seconds after picking up their instruments again, the opening notes of The Middle jolted the audience into mass singalong. This was followed up with ‘Integrity Blues’ highlight Sure And Certain almost as though to say “Hey, the new stuff is good too”. However it wasn’t until those familiar notes played with the set closing in a sea of “woah oh oh oh oh ohs” known as Sweetness.

With their commercial highlights behind them and nine albums into their career, it’s hard to imagine them every breaking out of the nostalgia circuits now. What do I know though, stranger things have happened. Regardless of the future, the strength of ‘Integrity Blues’ and this magnificent performance show that this is a band far from done.