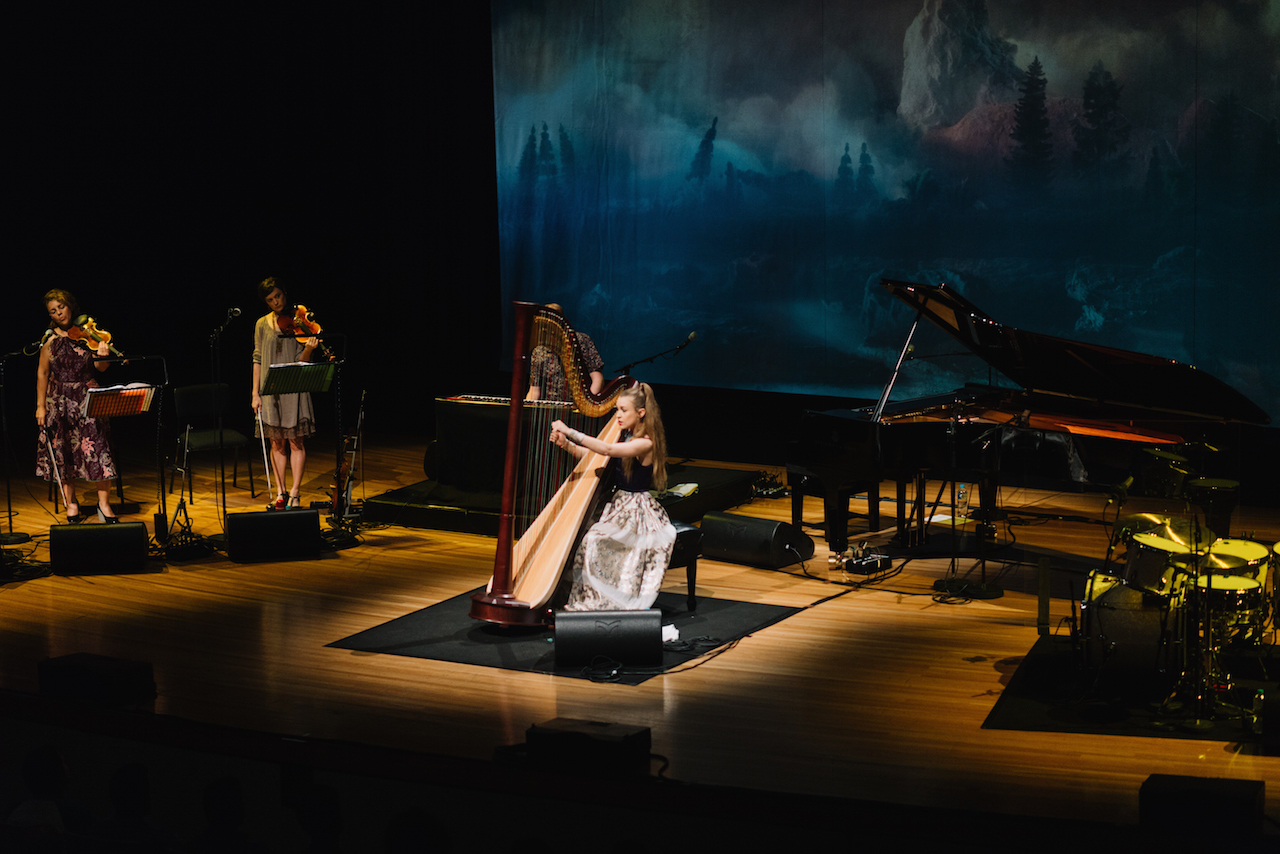 It’s been just over six years since Joanna Newsom was last in Brisbane. Hardly a surprise when there was a five year gap between 2010’s ‘Have One On Me’ and last year’s critically acclaimed ‘Divers’. Rather than The Tivoli, this time around Joanna’s band performed at QPAC, a far more fitting venue for her gentle, playful compositions. Late arriving audience members were made to wait between songs as you would at a play or classical performance, and the lack of disturbance is a welcome policy for music of this kind.

She’s accompanied on this tour by fellow Drag City singer-songwriter Meg Baird, frontwoman of the band Espers. Her solo material is far more stripped down and straight forward than the compositions of her other band. The delicate finger picking brought an intimacy to the cavernous surrounds of the venue hall. Many of the tracks were taken from her excellent ‘Don’t Weigh Down The Light’ album of last year, her pitch perfect voice making it no wonder she’s collaborated with artists like Will Oldham, Kurt Vile, and Sharon Van Etten. As a touring partner for Joanna, she’s the perfect compliment.

It’s not hard to understand why Joanna means so much to so many people. She encapsulates those qualities that apply to the most treasured artists, to view the world in a completely different way than the majority do. There’s something magical and other worldly about artists like Joanna, Bjork, or Prince where their perspective is so different you can’t quite comprehend where they’re coming from and the result is often surprising and thought inducing.

Joanna took to the stage alongside a band that included her brother Pete Newsom, Ryan Francesconi, and Mirabai Peart, all proficient in a variety of instruments, playing what bests suits the need of the song. As Joanna began to strum the sublime opening notes of Bridges And Balloons, the first song from her debut album, the room sat silent and engrossed, the return of a welcome friend.

“She encapsulates those qualities that apply to the most treasured artists, to view the world in a completely different way than the majority do.”

There’s a charming humbleness to Joanna’s approach to everything she does, and her joy at being able to hear her bandmates due to the good monitoriong at QPAC was too much to hold to herself. She told the audience of her joy, the satisfaction painted across her face. Other than an unfortunately timed stab of feedback in the song that followed, the sound was equally as well balanced from the audience perspective too.

The majority of the set drew from Joanna’s latest album ‘Divers’, its accessibility giving the performance a more inclusive feeling to the audience, as her brother’s drumming becomes a more prevalent part of the sound dynamic. The album is like a sort of best-of the styles that Joanna has explored in the past and it was a pleasure to hear these songs performed live on stage.

As the band left the stage for the first time, the audience stood for a standing ovation until the band were returned and in front of their instruments once again. They played another two tracks from ‘Have One on Me ‘, namely Baby Birch and the infrequently performed Good Intentions Paving Co. The inclusion of the latter made the rest of band look nervous before playing though these nerves were unnecessary as they performed it perfectly, as they had with the rest of the set too.

As the band left the stage with smiles and waves for the final time, the audience were on their feet again, pounding their hands together, satisfied by the unique and magnificent performance they’d been lucky enough to witness.

Check out our Live Gallery HERE