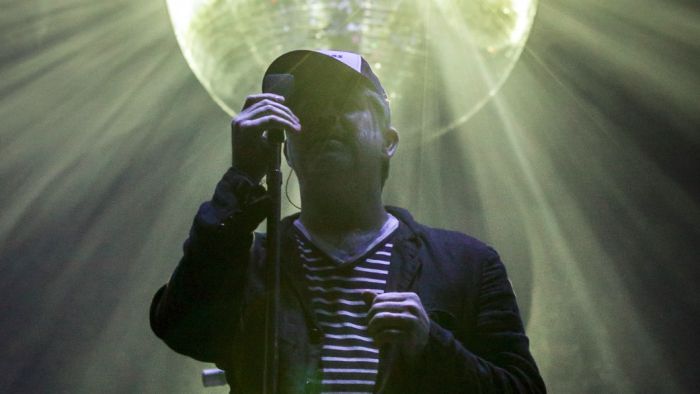 When LCD Soundsystem walked on stage at Melbourne’s Margaret Court Arena on Wednesday night they were greeted by a full house, already writhing and bubbling thanks to the great guest DJ warming them up. With almost no delay the band started their own rhythmic writhing, subtly adding to the sound as each player slipped into place, sipping glasses of wine. By the time lead singer James Murphy grabbed the mike, the crowd was roaring and the arena pulsed with thousands of eagerly nodding and bouncing fans. As expected from this great live band, the first song, Yr City’s a Sucker, came to fruition with an explosion of light from the giant disco ball, filling the room with swirling sparkles as the bass dropped, the crowd roared, and serious dancing business began en masse.

After a quick, “Hi!” they went straight into Daft Punk is Playing at My House—serious dancing business went up a notch. The party atmosphere kept ascending with I Can Change making full use of their vast array of retro synths, as did Get Innocuous!. They were again put to powerful use with the slower, kneading passion of American Dream. Here the crowd found its singing voice. You Wanted a Hit followed, giving plenty of opportunity for the singing and dancing businesses to merge. Sensing the party gloriously exploding around them, a brief pause for sips of wine was followed by launching into Tribulations. Full of voice and jumping in unison, the crowd found another energy level-up that carried through to Movement and Call the Police.

Given this was really a masterclass in having an amazing time dancing your ass off, there’s very little chat from the band. Murphy briefly thanked everyone for keeping their phones away—then had to repeatedly gesture to all the simple ones to whom this was an invitation to start filming poor quality wobble-shots of the back of others’ heads—and had a couple of attempts at introducing various band members. Later he took the opportunity call out the ignorance and brainwashed blabber of the old lady whose name is on the building. The crowd roared its approval as he vowed to return when the venue name is changed, the rest of the band agreeing with a raised fist and nodding heads.

Someone Great got everyone in sync from the first note, followed by Tonite. Murphy then explained the run of the rest of the night, “We’re going to play two more songs, go pee, then come back for two more songs”. They finish the set with Home and New York, I Love You But You’re Bringing Me Down. It’s here, a chilled out calm before the storm, where Murphy embraced the mike stand as close as a slow dance, and poured his heart into a great version of this classic. And just like that they’re off to pee.

The promised two-song encore did not disappoint. Despite plenty of seething jealousy at the band’s ability to nip out for a quick pee, the crowd was quickly appeased as the band launched into Dance Yrself Clean. The smooth, gradual build up gets the crowd, “ahhhing,” as one before the beat dropped and strobe-inflected bass shook the floor. This was bone-rattling, dance-until-you-drop perfection and the crowd surged stage-ward. How did this magical night end? By diving straight into the crowd-favourite, All My Friends. This was a personal cue to each and every person to dance harder and more care-free than ever; everyone agreed and the band kept working the rhythms tighter and tighter to keep it going. They finished and disappeared through the screaming approval with a few quick waves and thank you’s. The crowd looked happily stunned as the lights came up. The masterclass was over, with serious dancing business set to resume next time LCD Soundsystem are in town. There is no better.