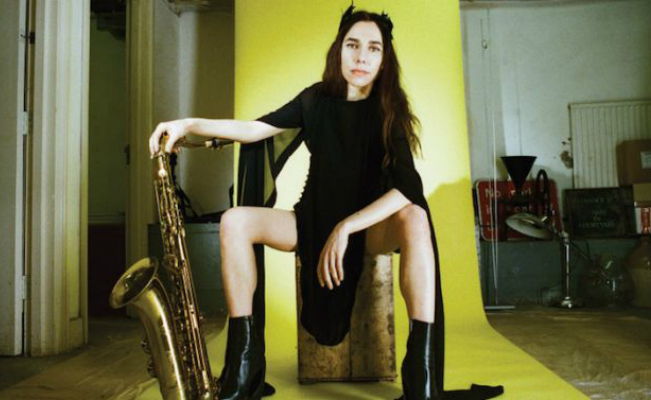 There were no support acts. Polly Jean Harvey’s name alone was enough to sell out two shows at The Tivoli. 25 years since she released her debut solo album, she is arguably more relevant than ever before. It feels right to eschew a support act for Polly’s latest live incarnation. The striking visual aspect of a black uniformed, non-descript group of men surrounding Polly at the centre of it all. She stood front centre between two giant drums emblazoned with a colour inverted version of the coat of arms as found on the cover of her latest album ‘The Hope Six Demolition Project’. A larger version stood boldly behind them, making it clear where the majority of the night’s set list would be drawn from.

Shortly after the lights dropped down and the audience shrieked their excitement as the band slowly filed in to a military beat played on portable percussion. Slowly the all-male backing band they took their respective positions around PJ, before filling in the audio gaps to begin with Chain Of Keys. The melancholy mood was at odds with the visual excitement from those in the crowd, who stood transfixed by what they saw before them. The call and response between Polly and her gang of male voices created an ambience somewhere between a protest and a funeral which continued with the staccato stabs introducing a rousing rendition of The Ministry Of Defence.

It wasn’t until The Community Of Hope that things a turn for the positive melodically, though Polly’s bitter lyrical reflection of the real life Hope Six Demolition Project kept things grounded. With The Orange Monkey and A Line In The Sand following, it was clear Polly wasn’t concerned about playing the hits, leading with five consecutive songs from her new album. This entire musical ensemble has been created specifically for her latest album which continued the high level politically driven direction that the Mercury Music Prize winning 2011 album ‘Let England Shake’ took to the next level. The next four songs were drawn from said album, beginning with the title track Let England Shake and ending with the acid-house tinged Written On The Forehead. On those opening notes, the relative familiarity received a cheer from those in the crowd nostalgic for older material.

It wasn’t until To Talk To You that we heard material predating these albums, taken from Polly’s piano driven, haunting 2007 album ‘White Chalk’. It was an apt reminder of the vocal capabilities Polly has, easy to forget when she uses them with such reservation. It was a pleasure watching her flit between vocal styles when navigating the course of her back catalogue, from the heavenly innocence of The Devil to the dirge of To Bring You My Love utilising it in numerous ways to create entirely different musical personas. The Devil was a particular highlight, its shout of “Come, come, come here at once” breaking its self-built tension and sending shivers down the spine. Polly’s intense mannerisms were mesmerising as she delicately sung the verses in an innocent falsetto, contrasting the song’s lyrical themes of infatuation as drawn from the Leo Tolstoy novel of the same name.

The use of restraint and contrast within the audio spectrum gave a huge impact to moments when certain ranges became filled again. It’s no wonder that Polly once applied to join the band Slint whose seminal 1991 album ‘Spiderland’ is a masterpiece of restraint and unconventional song structure within the traditional rock boundaries. Entire songs went past with the unnoticed absence of bass that just gave it so much more impact when it eventually returned. When you have musical legends such as Mick Harvey and John Parish in your band, you knew that these moments were no mere accidents.

Alongside The Words That Maketh Murder and The Ministry Of Social Affairs, The Wheel sounded particularly good in a full-band live setting. Polly began the song on the saxophone alongside Mike Smith as the looped riff rolled under a guitar solo as per the album recording. Mike’s sax playing throughout was unorthodox to say the least. He later got a chance to bust out a sax anti-solo at the climax of The Ministry Of Social Affairs to the bemusement of some in the crowd but to the visible pleasure of the band. Perhaps an example of Polly’s distaste for the unnecessary showboating some musicians feel necessary to prove their worth, or perhaps I’m reading too much into it. With Polly’s distrust of press and avoidance of interviews, it creates an air of mystery around everything she does, and leaves the talking to the music.

The reaction to the opening notes of 50ft Queenie made it clear what era of Polly’s music the majority of the crowd were there to hear as middle aged limbs went flying in sheer enthusiasm for the punky number that lasts a little over two minutes. The genre felt at odds with the current band incarnation, the extended percussion looked odd playing a rock beat, but they pulled it off with ease, giving a rendition as incredible and urgent as the day it was written.

With Polly having had so many musical personas over the years, it was no surprise that certain parts of the crowd reacted in different ways to certain material than others.

Being one of the few who prefers latter day PJ Harvey to her grungier origins, I felt it in the minority not responding so much to PJ’s earlier, rockist material. At one point one man cried out “Play a song!” swiftly followed by “Pick up your guitar” making you wonder if they’d listened to any of her music from the last ten years before paying the $100 a ticket to go see her play.

Polly closed out the set with a couple of tracks from ‘To Bring You My Love’ before returning to her latest album one last time with a chilling rendition of River Anacostia, its gospel drenched macabre undertones calming things down once again. As the song drew to an end with the repeated mantra of “Wade in the water / God’s gonna trouble the water”, the band lined at the front of the stage in a move as striking visually as it was aurally. Once complete, the band bowed to the audience before leaving the stage for an inevitable encore break. Though unexpected at the end of a live performance, it made sense in the context of the theatrical aspects of the show, giving the whole band an opportunity to revel in the crowd’s appreciation.

After the obligatory couple of minutes, Polly et al returned with a raucous rendition of Bob Dylan’s Highway ’61 Revisited originally covered on her arguably most popular album from 1993, ‘Rid Of Me’. It sounded massive when played by the full band making the most of the horn section amidst the bluesy rock. Polly left us with the self-titled closer of her 1998 album ‘Is This Desire?’, its sinister guitar riff and understated vocal delivery style fitting in nicely with her current musical incarnation. It was a pertinent reminder of how underrated that album really was, arguably ahead of its time on its initial release. As far as closing numbers go, it’s no euphoric send off to leave the crowd beaming, but instead ends with a hanging question, finishing abruptly, leaving the song feeling unfinished, unresolved, demanding answers.

Much like when a TV series ends on a cliff-hanger in order to hype the crowd for the next season, I hope this is a sign that there’s more to come and that we won’t have to wait five years for the next instalment in PJ Harvey’s legendary back catalogue. Whether it’s a continuation of her political commentary or something completely different altogether, the one thing we do know it’ll be is exciting!