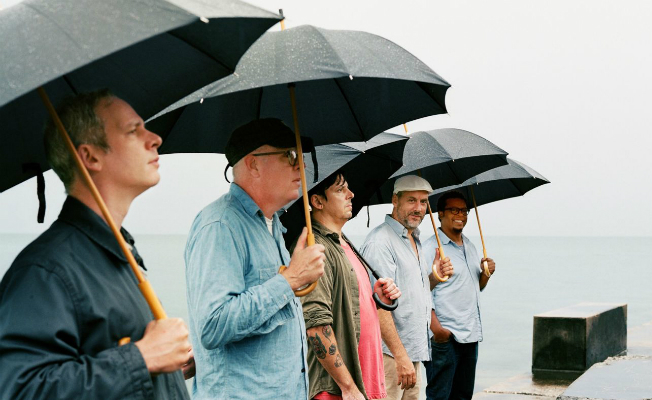 When I first discovered Tortoise were playing at The Zoo after seeing it on a poster, the search results I subsequently found were not particularly useful. While Harriet may be a national treasure worth saying hello to at Australia Zoo, I can’t imagine her being any good at playing the marimba…

This theme was extended further with Big Dead supporting and playing their latest EP ‘Shell’ in its entirety. Though surely these are all a series of coincidences, it was not lost on the man responsible for keys & vocals, Andrew Fincher. “It’s great to be playing with Turtle, I mean Tortoise. That’s a little in-joke we have. We don’t really think that. We actually have an EP called ‘Shell’, which is a coincidence,” he said with awkwardness levels straight out of Peep Show that only a jazzy instrumental rock band can deliver.

Big Dead blasted through a solid set playing ‘Shell’ before moving onto some other tracks new and old. Vocals drifted through the music less as a focal point but as another instrument in their arsenal. The hairs on my arm stood on end during those moments when the saxophone and bass clarinet boomed out in unison, filling the audio spectrum with a full sonic assault. Sad Machine sounded massive in a live setting, taking on a life of its own above and beyond what’s captured on the recording. As ever with this sort of music, it takes on a new life live, and fortunately for those in attendance Big Dead have the chops to pull it off with gusto.

“The Zoo was a sweaty hot box with the fans doing what they can to keep everyone cool, but none of that could stop a few people letting the beat flow through them.”

I was surprised at how few people were in the audience as Tortoise took to the stage. I’ll acknowledge that an American band producing jazzy post-rock whose most successful album was released in the 90s are more than a bit niche, but anyone I’d talked to who’d seen Tortoise live before said the choice was a no brainer. They released their seventh studio album ‘The Catastrophist’ this year, their first since 2009, and it was absolutely worth the wait.

They opened with the synthy tones of Gesceap, but it wasn’t until the rhythmic groove of Gigantes that things really started to pick up pace. Brisbane’s The Zoo was a sweaty hot box with the fans doing what they can to keep everyone cool, but none of that could stop a few people letting the beat flow through them.

The stage was a playground of instruments with so many arranged across its space that John Herndon’s synthesiser was barely visible from the right side of the venue. At the centre two drum kits faced each other, their full rhythmic force coming into their own during In Sarah, Mencken, Christ, And Beethoven There Were Women And Men, replacing the recording’s drum machine with something more powerful. Add to that an array of synthesisers, two vibraphones, guitars, and baby, you’ve got yourself a stew.

“It was hard to tell if it was bliss, anger, intensity, concentration, meditation or pain, but one thing for sure was that this was not a man dialling it in.”

There’s something mesmerising about each band member swapping instruments based on the song, a premeditated decision as to what would best suit a particular idea or concept and turn it into something that melts your ears. The talent to choose what medium to use to channel your ideas is one to be respected. Only Jeff Parker remained on the guitar throughout, but when his clean licks are as good as they are, who can blame him.

I could write a book about the facial expressions of John McEntire, which were never as prominent as when he was sat behind the drum kit. They flitted through the entire emotional range an Oscar-winning actor would display throughout a feature length film in mere seconds. It was hard to tell if it was bliss, anger, intensity, concentration, meditation or pain, but one thing for sure was that this was not a man dialling it in.

There was little conversation from the band, other than dedicating Prepare Your Coffin to the current state of the USA and a couple of intense and surreal soliloquies from Douglas McCombs. Despite the low attendance, the band still came out for two encores for those appreciative few in attendance. Once finished, Douglas McCombs took to the mic a second time, pondering on his own height as he adjusted the mic stand, before leaving the crowd with three words to take home with them, “F*ck Donald Trump”.