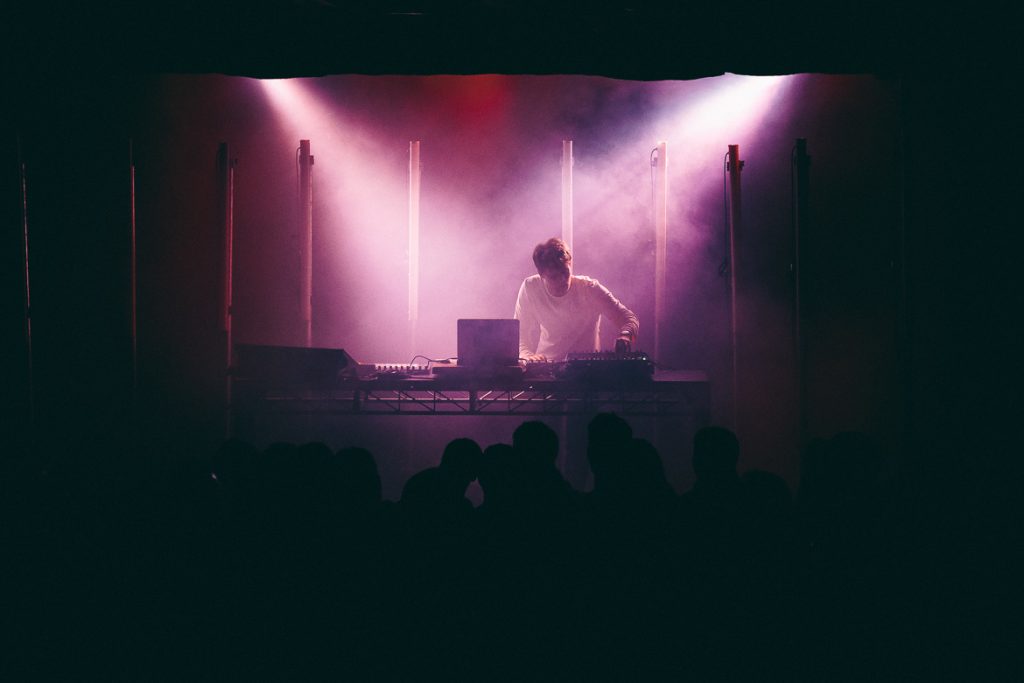 It would be pretty nerve-wracking to warm up for an act as adored and revered as Tourist, but in her role as his tour support, Dena Amy projected only confidence and poise, as the Sydney-now-LA talent loosened up her mid-week crowd, helping them shake off the work day and get them limbered up for their headliner. Dena’s on-stage energy is positive and infectious, and she hits us with one clever select after another: obscure ’70s disco tracks carried by soulful female top-lines are interspersed with tribal-infused rhythmic numbers, then seamlessly transitioned into pulsating remixes of contemporary electronic numbers from Koze, Lastlings and RÜFÜS DU SOL. The inclusion of the new Chemical Brothers track is a highlight. In fact, I find myself Shazaming more than a few numbers in her set; including an Ivan Masa track I will definitely rinse in days to come. Dena goes out on a high note with new single Jol, which is received well by her engaged dancefloor, that’s been progressively edging towards capacity, reaching it by the end of her set.

In my mind, albums don’t come more soothing than Tourist’s sophomore offering ‘Everyday’. As a collection of songs, its swirling synths have calmed my anxiety on public transport commutes, its soft drums have brought gentle enlivenment to long afternoons in front of the computer at work, and its sparkling crunchy FX are a reassuring bed time companion; and aide to sleep. In fact (and I’m sure other album fans can empathise) ‘Everyday’ had in a brief time become so sacred to me, I had some trepidation about seeing it in a live context… An intimate performance lying on grass under a ceiling of stars, or at dawn on a beach, sure… but a grungy inner-city venue packed to the brim with noisy, sweaty punters? Eh, not so much. However, it couldn’t be denied that this was an ideal time to catch this talent live; as he sits on the cusp of bigger things, and bigger crowds. Also, I was curious to see how Tourist would enunciate the stylistic pivots in his diverse (and burgeoning) repertoire live, how would he move between the livelier, danceable material of ‘U’, the ambience of ‘Everyday’, and those singular, brilliant melodic pop gems (that we all know will propel him into mainstream consciousness before his next tour comes around)? Resolute, I elbowed in.

Pink plumes of smoke envelope the crowd as Tourist starts up with latest single, Love Theme; the track steadily picks up speed until it surges steadily like a heartbeat through the crowd, who are nodding heads and moving as that inimitable Tourist propulsion kicks in. He delves into the punchy To Have You Back—this song’s sound design is so inventive, and the vocal samples are so good, its always an impressive listen in the headphones. I had some idea of how it would play out live thanks to the ‘Live From Corsica Studios’ EP, and it’s a downright pleasure to see Tourist really stretch it out and work it at OAF that night—it erupts into several levels of intensity and continuously surges in waves through the room.

Apollo starts up and two blokes behind me decide to use its soft whispy beginnings as a chance to start loudly debating whether this is the best song on the album or not. I’m about to tell them to pipe down but instead decide to get in on it. “What do you like most about the new album?” “It makes you feel better,” they say. OK, I like them now. They tell me its like a memory bank of emotions; every song elicits something different from you. I’m inclined to agree. Apollo is the black sheep of the show that night, a bittersweet work of beauty, and Tourist is careful to deliver it this superb song to us gently, showcasing its exploratory textures with a dynamic performance, carving out a moment of melancholy in the hyperactive room… the only other artist I’ve seen do this as well is Jon Hopkins. The lights are hued in purple throughout, Tourist breathes this track’s beauty in and out over the crowd.

The audience awakes from a momentary lull to re-engage for Too Late, a ‘U’ album favourite. This track goes well live; it has big energy and its proggy-ness is something your body can hold onto; the catchy vocal loop chased me all the way home later that night (and into the next day) too.

Dripping with sweat, Tourist pipes up towards the end of the show, “I don’t usually talk at gigs,” he says, “but this has been fucking fun!” It’s true, Sydney has turned it on for Tourist tonight; you’d be hard-pressed to find a better audience. Apparently even in Manchester he doesn’t get a crowd this good, he quips. The disbelieving artist goes on to tell us that he could never have imagined that when he was writing songs in his bedroom, we’d be here for him, with bells on, on the other side of the world, ready to receive them.

The crowd is flattered by Tourist’s gratitude, and we respond by exploding into pure buzzy joy during finale, We Stayed Up All Night. God, this is a great pop song, those synth stabs always remind me of M83’s Midnight City. This is, after all, the man who humbly co-penned (and won a Grammy for) the Sam Smith hit, Stay With Me. People are grinning, waving vinyl and arms in the air, and singing along. The whole dancefloor literally jumps up and down and punches the air during the chorus. It’s the most colourful moment of the night, a collective joy you feel glad to be a part of. But alas, its 11pm, and a school night, so we can’t Stay Up All Night (but you can bet every person in that room absolutely would have let Tourist play right until 5am, given the chance).

What we can do, is stamp our feat and shout until our voices cut out for this guy to come back and play Run. Because he hasn’t played Run! He can’t leave us without playing Run! He’s surely saved it for encore! And what an encore it was. Yellow lasers slice through the crowd in all directions, and Tourist holds us tight as we dance our way through to the end. Before leaving, Tourist thanks us for being a “bunch of sick cunts”, with the disclaimer that even though it means something very different where he’s from, he knows it’s a high form of praise ‘round these parts. Well, if you ever tire of Manchester, we’ll gladly adopt you, Tourist.