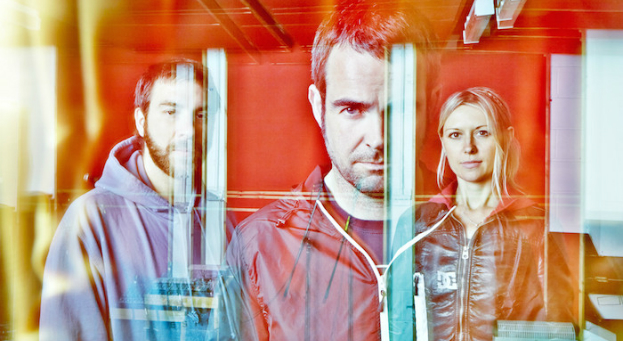 UK rock trio Future Of The Left are the best band you’ve never heard of. From their towering riffs to the razor sharp wit that underpins their lyrics, they’re the band that could change your life. Back with their fifth album ‘The Peace And Truce Of Future Of The Left’ and a meaner attitude than ever, it’s a tour de force of the band’s strengths and vitriol.

There are fewer sentences that excite me more than “New album from Future Of The Left”, so when it was announced last December that the band were starting a crowdfund for their fifth album, my Christmas had come early. The project met its financial goal in a few hours, a testament to the hardcore following the band have, and recognition that without this money a band of their level of popularity genuinely wouldn’t be able to carry on. Just over three months later and the album ‘The Peace And Truce Of Future Of The Left’ was ready for release.

“Whether that’s a single guitar lick or a single drum, there’s no excess, nothing to hide behind and puts Falkous’ distinct vocals at the forefront where they belong.”

Frontman Andy Falkous’ lyrics are as witty, memorable and quotable as ever. Whether it’s “My bank account is not a hole. It has no real purpose and a hole has one” or “A dead body in the boot of a Nova is the least of my problems, as long as there’s still room for the shopping”, there are an abundance of examples highlighting his gift of creating vivid mental images and writing lyrics that work on multiple levels, with the timbre to sound amazing when sung or shouted.

Since their last album, they’ve reduced from a 4-piece to three after Welshman Jimmy Watkins left the band. The result is a streamlined sound akin to the days Kelsom Mathias played bass, putting more emphasis on Jack Egglestone’s drumming to add range to their sonic simplicity. One of the greatest strengths of the band is the ability to cut away the fat till nothing is left but the bare essentials. Whether that’s a single guitar lick or a single drum, there’s no excess, nothing to hide behind and puts Falkous’ distinct vocals at the forefront where they belong.

The first thing you’ll pick up on with this album is a relative lack of immediacy compared to their previous two albums. 2012’s ‘The Plot Against Common Sense’ had raw aggression that was tempered with experimental keyboard based flourishes or anthemic choruses on tracks such as A Guide To Men or How To Spot A Record Company. This album instead focuses almost exclusively on stringed instruments for melody, giving the album a distinctly heavier feel.

Since 2013’s ‘How To Stop Your Brain In An Accident’ Andy Falkous has released two “solo” albums under the guise Christian Fitness, whose sound is not wholly different to Future Of The Left, yet distinctly murkier and reverb happy. The latter half of 50 Days Before The Hun even borrows a melody from the verse of the self-titled Christian Fitness track. The influence is evident right from the opening guitar wail of If AT&T Drank Tea What Would BP Do? to the ethereal guitar that underpins Back When I Was Brilliant. The progressions are hardly seismic, but still create enough progression to distinguish the album from what came before.

“It’s not the first time an incongruent yet easily identifiable single has stuck out from their track list, and helps bring calm to the onslaught around it.”

Those craving the hooks and earworms of tracks like Beneath The Waves An Ocean or Fingers Become Thumbs need look no further than the back to back of Grass Parade and The Limits Of Battleships. The latter seems an obvious single with its head bopping verse and surreal yet melodic chorus amidst a relatively abrasive track list. It’s not the first time an incongruent yet easily identifiable single has stuck out from their track list, and helps bring calm to the onslaught around it.

There are no massive changes here that’ll win any new fans, and you could argue the relatively small progression or exploration of themes from the first two albums suggest a regression, but that depends on your perspective of what they were doing in the first place. Falkous knows how to play to his strengths and knows how to sculpt an album into something that rewards from the first listen to the hundredth.

This album is one of their most consistent. There’s no Cosmo’s Ladder here. The closest you get is a rehash of the faux-accent on Miner’s Gruel that was first used on Singing Of The Bonesaws. Something doesn’t feel right about using it for affect after the cutting “shouting inanities in a regional accent is valuable to culture” line surmised its use so well. That’s what makes the tracks where it comes together perfectly like Back When I Was Brilliant or No Son Will Ease Their Solitude even more of an achievement. It’s simple brilliance, a bacon sandwich!