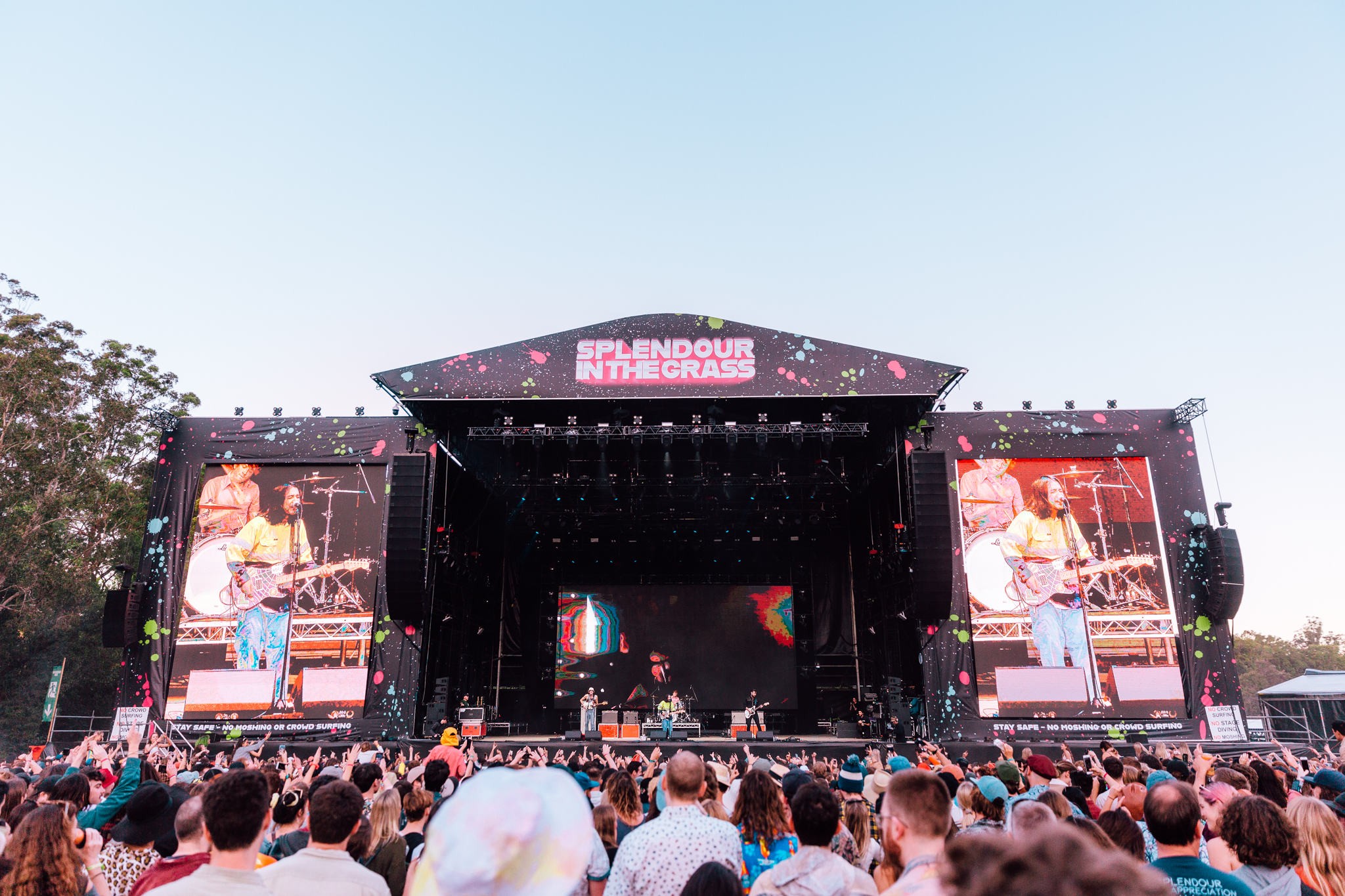 Trophy Eyes matched the heat of the early afternoon, drawing in a solid crowd to a dusty amphitheatre set. The band’s debut SITG appearance was significant for marking a huge change for their future, with the departure of long-time guitarist Kevin Cross, who is leaving to start a family. The other members of the band made sure that Cross’ final set of chords rang out powerfully, blazing through a tracklist heavy on tracks from their 2018 release, ‘The American Dream’.

The newer sound, tending towards edgier alt-rock, fared well with the assembled fans, but older favourites like Chlorine (and a surprise performance by comedian Chris Lilley) received huge welcomes. Trophy Eyes are definitely sitting pretty to be a stadium rock powerhouse of the Australian scene, mirroring a more hardcore-tinged version of the rise of Gang of Youths.

2019 isn’t Pond’s first Splendour rodeo, nor was the Saturday set their first of the festival following a Thursday night opener, but Nick Allbrook and his band of merry men threw everything they had at a strange, avant-garde, and genre-bending set that plucked tracks from the band’s 11-year discography. Allbrook was all over the stage, literally, as he crawled, climbed, jumped, danced, swayed and shimmied around, but his perpetual motion never got in the way of a solid front man performance.

Fans would know Pond’s repertoire crosses from psychedelic to disco-esque, and they were treated to it all, with a set featuring Giant Tortoise, Don’t Look at the Sun or You’ll Go Blind, a Bee Gees lead-in to Paint Me Silver, and a rendition of their recent Like A Version cover of Madonna’s Ray of Light. While the downright strangeness mightn’t be everyone’s cup of tea, there was something strangely satisfying watching the cyclone of musical movement sweep across the stage in the afternoon sun.

The new configuration of the G.W. McLennan tent was put to a full test as punters packed the stage to the rafters for Ruby Fields’ late afternoon performance. Caring not for the implied rules of festival camaraderie, Fields brought her signature irreverence to bear almost immediately, dissing anyone who left to go see Dean Lewis, who was preparing to take the stage at the Amphitheatre over the hill. She then shredded her guitar across a charging set featuring hits like Dingo and Ritalin, backed by a small band of friends, complete with a strings section. Emotions ran high as Fields gave short tales about the origins of many of her tracks; a significant portion of which were born from pain and tragedy, but catharsis came in the form of a light-hearted wink or full-on pisstake fairly quickly.

Without doubt, what was already the stand-out set of the day changed to an even higher gear when Fields teased her cover of The Church’s The Unguarded Moment, but baited-and-switched to a blistering cover of Britney Spear’s track Toxic. Going back-to-back from Spears to her Hottest 100 #9 placer Dinosaurs, the crowd gave everything back, and by the end of the set, it was almost a struggle to hear the band on stage over the lyrics being sung back.

British rockers Wolf Alice hit the main stage to a cold crowd (literally and metaphorically following the chilled vibes from Dean Lewis earlier), but that didn’t stop them hitting hard with big tracks early. You’re a Germ, Moaning Lisa Smile and Don’t Delete the Kisses all hit before the halfway mark in the set, whipping up a frenzy in the mosh pit forming front-of-stage, however the four-piece seemed to lose momentum through the back half of their set, especially as punters looked to move towards Allday’s set starting cross-festival at the Mix Up Stage.

Ocean Alley took the stage at the Amphitheatre to a full house. The Northern Beaches boys had been announced on the festival bill as a “Mystery Oz Act”, much to the joy (and chagrin) of significant subsets of punters, following a back-to-back performance from 2018. They sounded crisp on stage, with lead singer Baden Donegal’s vocals matching their recorded quality note-perfectly throughout the whole set, but from a visual standpoint, the upgrade to the Amphitheatre might have hurt the band’s style.

The larger space seemed unused by the fairly motionless band, and it wasn’t until the closing tracks, Confidence, Baby Come Back, and Knees, that Donegal began to move more freely across the space. The set was a jerky change following a soulful Dean Lewis and punkish Wolf Alice, but a strong turn-out from the crowd points to a continuing rise for the Sydney six-piece.

Expectations were high for Catfish and the Bottlemen’s set at the Amphitheatre, and while the Brits played their music well, it was a harsh change of direction from their performance in 2017. Lead singer Vann McCann was constantly moving, which set a dynamic mood, however, he appeared to cover up a few missed cues by gesturing to the crowd to sing lyrics back on more than one occasion. By the end of the set, large swathes of lyrics went unsung by the frontman, who, while bringing a high-energy performance, left a few punters wishing they had gotten more from the band.

A 45-minute wait between Catfish and the Bottlemen’s set and Childish Gambino’s entrance saw a few punters submit to the cold, but the ranks were quickly replenished by fresh troops moving in from around the grounds for what was rumoured to be Gambino’s final Australian show. Donald Glover’s alter-ego hit the state in all white, backed by a stunning light show, live band, dancers and gospel singers, and immediately pounced on the energy in the crowd. Eyes wide, with intensity set to kill, Gambino rapped, sung and talked his way through a pile of his hits, and even debuted some new material, which drew a surprisingly strong reaction from the crowd.

Gambino knew his set was strongly anticipated, telling crowds to drop their phones, because he was taking them “to church” (ironically, he helped to frame a young fan’s photo mere moments later). But take the crowd to church he did, with all treating his performance with a reverence not shown to earlier artists. Gambino also took time to chat with the crowd about his life, his apologies for bailing on an Australian tour last year, and what the future might hold for him.