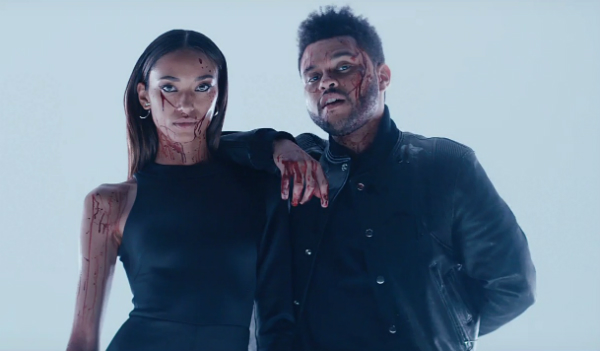 Even though his new album is dropping tomorrow, The Weeknd has decided to just go ahead and give you a taste of six tracks off ‘Starboy’ in the form of a mini-movie he wrote himself.

Clocking in at just under 12 minutes, with a solid four minutes of credits, ‘M A N I A’ is full of glitz, glamour, and a panther. The clip starts with visuals of a black Panther swirling in an ominous white room, filled with a multi-level white platform/jungle gym, all backed by Future collab track All I Know.

‘M A N I A‘ then cuts to the immensely wealthy The Weeknd cruising along the California shoreline in his fancy sports car. With a song change to Kendrick Lamar collaboration Sidewalks, The Weeknd pulls up to a grimy underground club before a smooth transition to Secrets.

As The Weeknd pushes through the club, seemingly looking for a lady, we are treated to the same amazing cinematography as the famous night club scene from John Wick. To refresh your memory check out the snippet below.

As The Weeknd locks eyes with the mysterious girl of his dreams, transition to a taste of the slow-burning Die For You. The bodies of the two lock together as the sexual falsetto of his vocals floods the air waves.

All is not sex and flowers for The Weeknd though. He heads to the bathroom for a quick fix of the hair and ends up getting involved with a shady fellow wielding a knife. Tough times for The Weeknd in a way that we have all felt in the club; when you go to chuck a leak and then almost get stabbed.

What follows in the bathroom can only be described as “bloody”, with The Weeknd emerging covered in the visceral etchings of his foe like a Jackson Pollock painting. With a track transition to Party Monster (nice play on words there) The Weeknd returns to the D-floor to throw some shapes like the lord of froth that he is.

The muzz continues on to the end of ‘M A N I A’, before the slightly creepy end credits start to roll as we are treated to Daft Punk collab I Feel It Coming. The credits get on the creepy side by having The Weeknd and his girl standing in the middle of the ominous white room, staring into our souls.

While we only hear two minutes of each of the tracks preceding, I Feel It Coming is played through in full. All the while, The Weeknd really just stands there staring at you, beaming the message “buy my album” subliminally through your screen.

A staple of The Weeknd is his famous hair, however, for ‘Starboy’, The Weeknd decided to chop it off. In a recent interview with Zane Lowe, The Weeknd stated “It was there and then the music was getting really sad”.

However, now that the hair is much shorter it seems The Weeknd is feeling like Jay Z before the launch of Tidal. “It was so good. I could sleep better, I felt lighter, when I perform, I perform better and feel better. It was cool. You don’t even realise how much of a pain in the arse it was until you cut it”, The Weeknd said.

The Weeknd will be opening a pop-up store in Melbourne alongside the album launch of ‘Starboy’ next week as well, with plenty of merch to go around. Whether the pop-up will insight madness like the Yeezy pop-up stores did earlier this year remains to be seen.