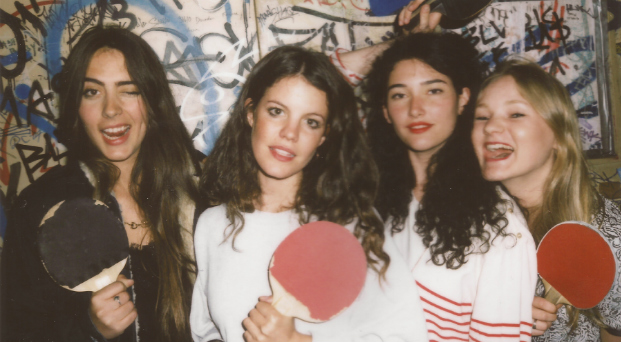 Last Saturday was probably the last chance for Australians to catch a band like Hinds playing in a venue as comfortable and intimate as Brisbane’s The Foundry. The Spanish 4-piece headlined Brisbane’s best monthly alternative live music night ‘Loaded’ to what must have surely been a near sold-out crowd.

Hinds have been steadily doing the international tour rounds after releasing their debut album ‘Leave Me Alone’ to critical acclaim and an equally warm reception from their fans. The last few years have seen the band refine and own their loveable, down-to-earth slacker rock image, as exemplified on their home-video-style music videos. This image is also personified live, with their cheeky, unassuming banter with the audience and with their neo-90s style of baggy t-shirts, cropped tops, mum-jeans and scrunchies. This visit to Australia sees Hinds firmly establish their identity as a consistent 4-piece, as opposed to having Carlotta Cosials and Ana Perrote front the band as the singers and songwriters behind Hinds.

“Their new single Impact embodies this tradition and was the highlight of their set, a brilliant hybrid of dance vibes and catchy indie guitar licks that gets the entire crowd moving.”

Hinds capture a particular zeitgeist predominant across music and youth culture today iconised by slacker rock figures such as Mac Demarco, which perhaps explains their short and sweet success story. This is emulated by their support bands for the night, which includes some of Brisbane’s brightest talent with Tempura Nights and The Creases. It’s fantastic to see local bands embracing a more optimistic take on garage, with the city being long known for its grungy and somewhat grotesque takes on the garage rock genre.

Tempura Nights strike the perfect balance of catchy pop melodies swathed by a layer of lo-fi, unabashed garage on single R.I.P CHIX, which they close their set with. Prior this, the band show off a few more traditionally riotous garage numbers that aptly demonstrate just what these guys are capable of. Undoubtedly, it’s R.I.P CHIX punters will remember when they go home and not just because it was the last song they played.

The Creases follow Tempura Nights and are revealed to be the ‘mystery’ support band for tonight, which was a predictable enough eventuality considering the band’s lead singer, Joe Agius, runs the ‘Loaded’ club-night. It was also a fairly expected choice because The Creases’ music fits in so well with Tempura Nights and Hinds. Although their original single I Won’t Wait fully embraces the jangle pop tradition Tempura Nights and Hinds belong to, The Creases owe much more to Britpop and Baggy, and it’s in this direction their music seems to be developing. Their new single Impact embodies this tradition and was the highlight of their set, a brilliant hybrid of dance vibes and catchy indie guitar licks that gets the entire crowd moving. In this way, the structure of the three sets works particularly well, with The Creases’ bubbly energy and slick production breaking up the unruly garage of the other two bands.

Hinds set the tone by taking the stage as Hot Chocolate’s You Sexy Thing plays in the background. “1-2-3-4” and they blasted straight into their first demo release, Trippy Gum. Even though it’s an old song, it nicely demonstrates what makes Hinds so exhilarating. The song gyrates between a fast-paced catchy chorus of “uuh-uuh-uh” to a lethargic bridge. This mirrors the shared vocals, which is an essential part of Hinds’ magic formula. While Ana Perrote provides deeper, more mature vocals, Carlotta Cosials compliments her with a higher-pitched voice. Both are distinctive singers, and embed all of their songs with character and charm. Their presence also reflects these binaries; Perrote is effortlessly calm and collected, while Cosials takes on audience-banter-duties with great enthusiasm and endlessly bops around the stage like a beacon of light you can’t take your eyes off.

“The energy of their tunes and their wonderful selves is a perfect crystallisation of the dizziness and uncertainty of being young and full of unchartered potential.”

While the constant back-and-fourth between a fast and slower tempo keeps the audience on their toes, it’s also symptomatic of another aspect that makes Hinds a band to watch out for. The energy of their tunes and their wonderful selves is a perfect crystallisation of the dizziness and uncertainty of being young and full of unchartered potential. At this point, Hinds have fulfilled much of their potential, but they still retain the same raw, uncultivated allure that makes them interesting and likeable.

There’s a sense of excitement and zest for life underpinning most of Hinds’ songs which makes their live shows so fun, but there’s also a constant thread of unsatiated yearning that haunts their tunes. Popular songs like Chili Town and Bamboo embody this paradox; they display all of the usual malaise about navigating the confusing parameters of relationships, but there’s always a sense of self-assurance and confidence in both lyrics and the attitudes of Hinds as performers, which gives their music plenty of legs.

Hinds close of their set with their now almost predictable cover of Thee Headcoat’s Davey Crockett and it’s a staunch reminder of what makes them so great. After a gracious bidding of goodbye, the girls plunge into the song, stretching the limits of their vocals as they screech through the chorus.

Hinds proved they’re a fair contender in the indie-rock genre, and that things might not be as dim as we think for garage and grunge. There have been many pieces written in the last 10 years on the death of indie-rock in a genre overpopulated by privileged all-male and all-white British or American groups. Hinds are none of these things and if their live show is anything to go by, they’re the future of indie and it’s never looked brighter.

Read our interview with Carlotta Cosials of Hinds HERE