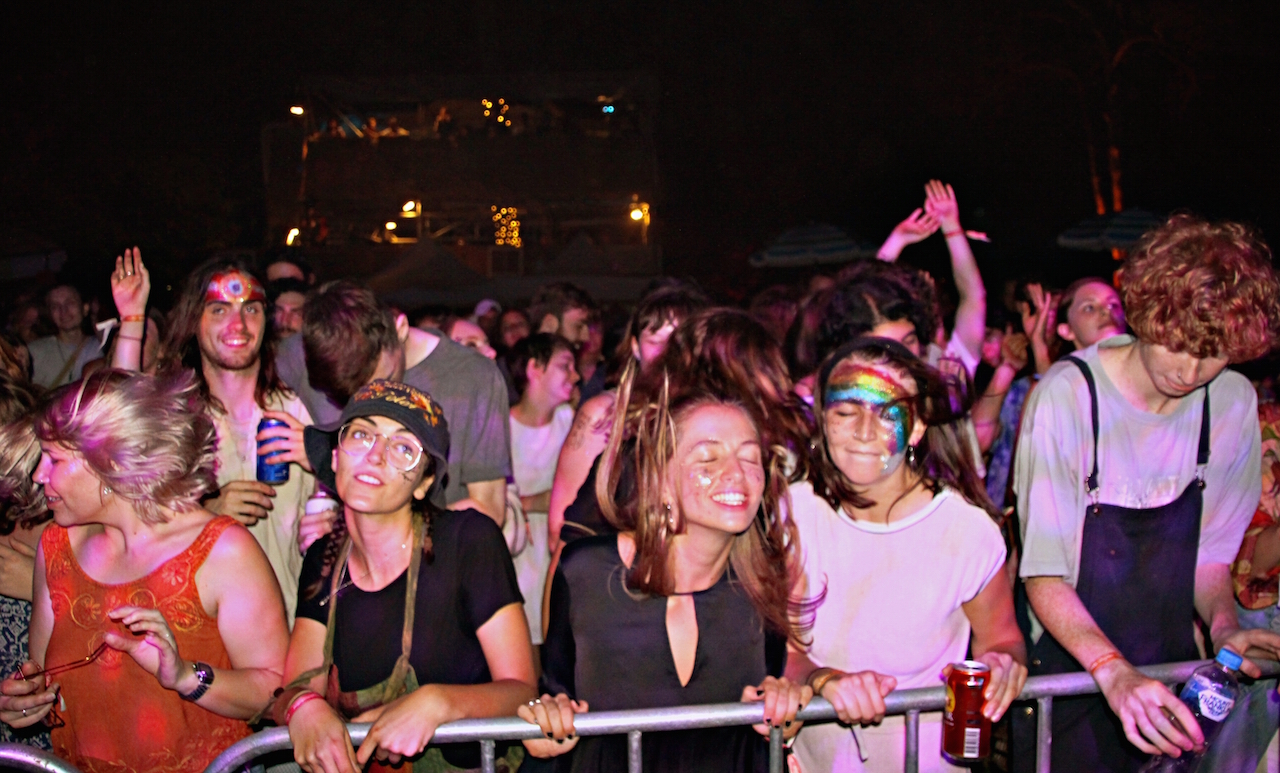 Jungle Love Festival 2016 was a glorious convergence of unique musical acts, inflatable pool toys, and unconditionally positive vibes. Over two days, I joined a tribe of Jungle Lovers in the Sunshine Coast hinterland to disconnect from technology and immerse ourselves into the third year of this unique festival-meets-wonderland experience.

Day One
I arrived at Imbil’s Borumba Deer Park in the morning, and despite not having access to Wi-Fi or phone reception I quickly bumped into my camping crew. They’d just hit up a morning meditation session and looked ready for the first official day of Jungle Loving.

Although it was close quarters in the campsite of this sold-out festival, Jungle Lovers showed their inclusive nature by making space for everyone’s cars, tents, and extra large eskys (because Jungle Love is BYO!). The campsite was super close to the three main live music stages, food stalls, and Chai Tent (aptly named The Rejuvenatorium), but the trip could be cut even shorter by picking up one of the free-to-use rainbow bicycles along the way. As if good vibes and communal bikes weren’t enough, Jungle Lovers were free to swim in little Yabba Creek that ran parallel to the main stages and Chai Tent. 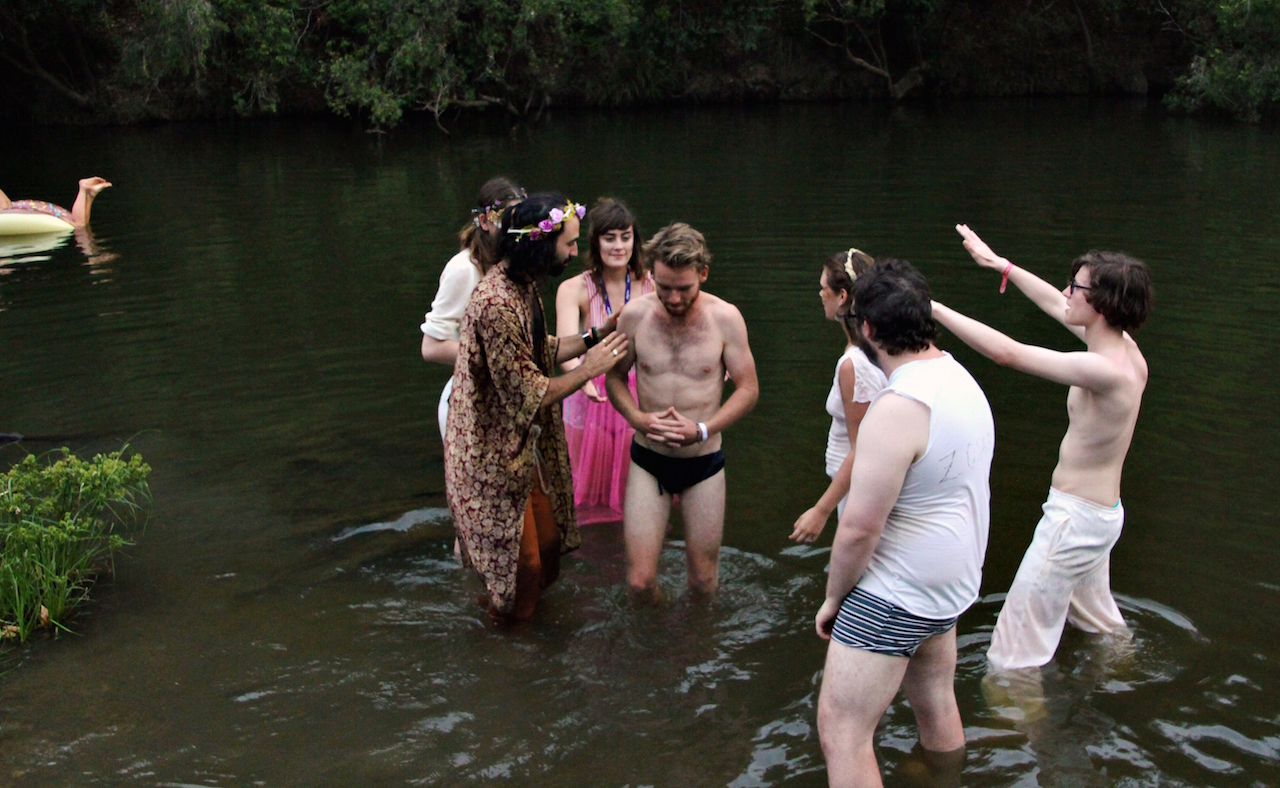 After a quick dip in the river, which was populated by mass quantities of inflatable pool toys, I was drawn to the alluring indie-rock sounds of The Con & The Liar at the Wonder Stage. The Brisbane 5-piece, who were decked out in very jungle-appropriate Khaki, smashed out tracks from both their debut EP ‘Deserters’ and sophomore EP ‘Biting’. As the first band I caught at Jungle Love, The Con & The Liar set the bar high for the other 52 musical acts performing over the weekend.

Whilst co-captaining an inflatable boat down the river, I listened to Bugs’ high energy performance at the Yonder Stage. The Brisbane surf-punk rockers kicked off their set with an epic blink 182 style cover of Cher’s Believe and maintained their joyfully angsty sound throughout.

Heading back upstream, I caught the sweetly satirical sounds of Brisbane quartet Pop Cult performing their debut EP ‘Cult Classics’. Although the band performed their original tracks impeccably, the standout moment of their set was their cover of Len’s 90s hit Steal My Sunshine. The familiar cover perfectly suited to the vibe of the sunshiny day and resulted in maximal audience groove.

On my travels, I ran into friends sporting psychedelic tie-dye shirts they’d made during crafternoon in the Chai Tent, as just one of many activities offered at the festival. Everywhere you turned at Jungle Love there were art installations, hula-hop sessions, people being married to inanimate objects, and funky workshops for things like watercolour and embroidery. 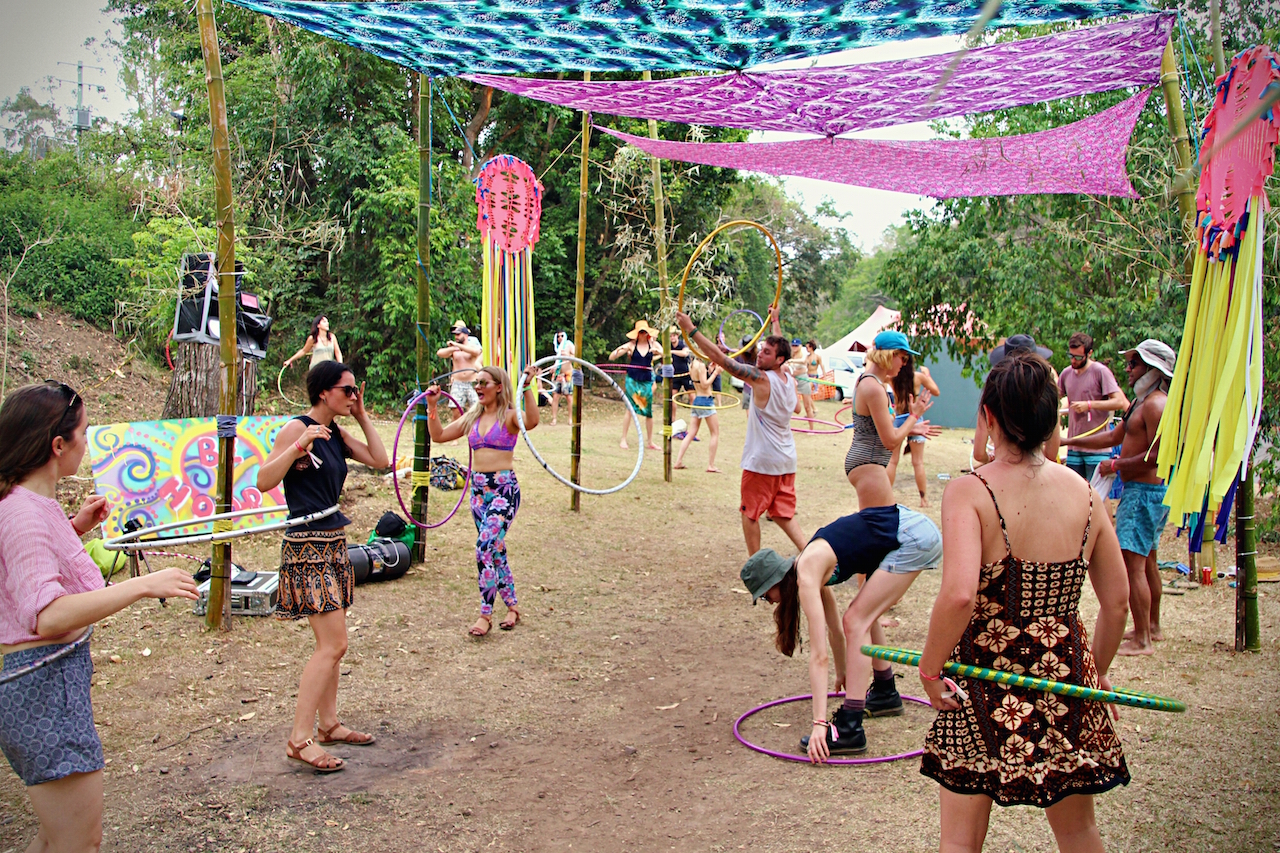 Crowds fittingly reconvened at 4:20pm at the Wonder stage to enjoy the smooth jazz instrumentals of Accomplice Collective. The 5-piece Brisbane band had the audience grooving throughout their entire set and finished with an epic 12-minute track, which showcased the musical and cardiovascular ability of drummer Nick Nasdaq as he performed a killer solo!

After fuelling up with two slices of Wonder Whites’ finest, I headed down to the main stage to catch the evening acts. Although props are awarded to Captain Dreamboat, Hazards of Swimming Naked, beneb, HRBRT, Cheap Fakes, Dubarray and Twin Haus, the standout performances of the night were The Jensens and Sahara Beck.

Local favourites The Jensens delivered their quintessential garage pop in a stellar set, littered with tracks off their debut EP ‘Everybody Talks‘ with polished perfection and ended with a legendary mash-up of Kanye’s Touch The Sky and Curtis Mayfield’s Move On Up. MVP goes to bassist Bodi Lowrie, who kept the crowd entertained with his energetic dance moves, rockstar strums, and banter!

Following on from The Jensens, Sunshine Coast sweetheart Sahara Beck dazzled us with her sophisticated yet sultry tunes from the moment she stepped on stage. Beck owned the stage as she performed avant garde folk-rock tracks from her sophomore album ‘Panacea‘ with joyful confidence. I can’t be sure if it was Beck’s unreal performance, the amazing light rig of the Wonder stage, or maybe the effects of some unexpectedly strong baked goods, but after Beck’s set I felt extremely content with my first day in the jungle of love.

Day Two
The second day of Jungle Love was a mixed bag of highs and lows. There was torrential rain (low), rain dancing (high), the closure of two stages (low), magnificent instrumental acts (high), and copious cups of Chai (high +).

With the weather still in check, I began my day with a brisk dip in the river and slow brewed chai in The Rejuvenatorium, where relaxation guru Haitch was running a meditation session backed by the soothing sounds of the didgeridoo. 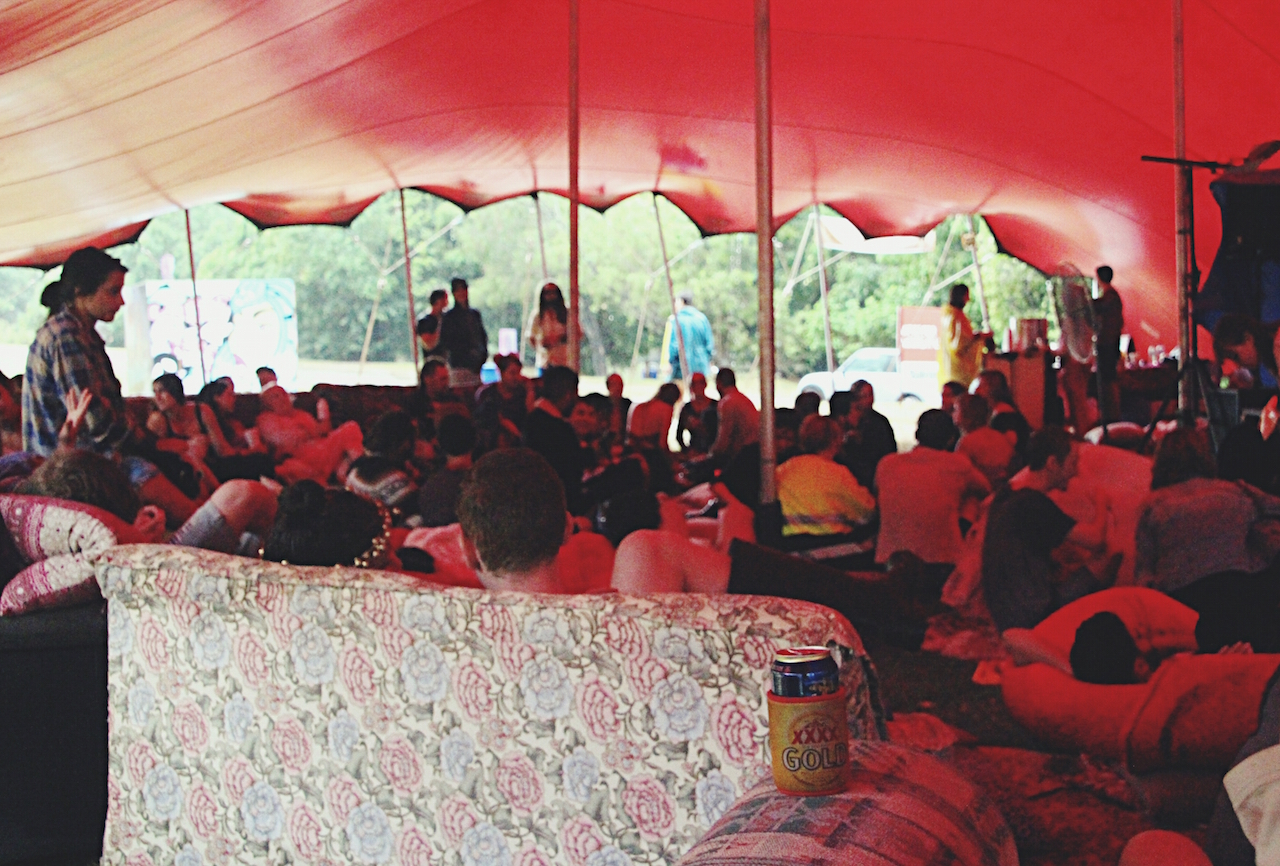 The first act I caught were Brisbane surf rockers Shag Rock, who had an enthusiastic crowd dancing and singing along to the tracks of their self-titled debut album ‘Shag Rock’. The 5-piece sounded similar to fellow Aussie surf rockers Lime Cordiale, with more dominant acoustics and percussion.

Rain began to fall shortly after Shag Rock and I happily took shelter in the Chai Tent to watch some incredible open mic acts. But as the weather shifted from an ambient drizzle to a scene from The Day After Tomorrow, two of the main stages and the Chai Tent had to be closed. Most Jungle Lovers took shelter in their tents, but some admirable souls embraced the rain as a welcome cool-down from the hot weather.

The rain began to subside at twilight and I left my tent in search of a celebratory bowl of Govinda’s kofta balls. Kofta balls in hand, I made it to the Chai Tent in time to catch Raymond Williams, one of Jungle Love’s director’s, explaining that many of the acts scheduled to play at closed stages would be moved up to the barn and Mesmerism. Despite the dealing with the cancellation of acts and damage to technical equipment, Savage maintained an admirably positive attitude and encouraged Jungle Lovers to “make the most of the night”.

In the spirit of making the most of it, I stuck around the Chai Tent to watch Cellist Rob Knaggs deliver an incredible instrumental performance entitled ‘The Belugas’. The title and music of Knaggs’ set were inspired by his fascinating experiences playing the cello to whales at sea. With the tent light only by a cello decked out with fairy lights, Knaggs ended his set with his original song Flying Whales. The symphonic yet serene music created an atmosphere so ambient he received a standing ovation.

The mood in Chai Tent lightened as soulful RnB group The Brains Trust took the stage. The trio got the crowd out of their bean bags and on their feet grooving with their satisfying blend of smooth instrumentals, futuristic synthesiser beats, and Jess Lean’s powerful Aretha Franklin-esque vocals. With the rain gone, the good vibes and dancing continued deep into the night with sets by Zefereli, Tijuana Cartel, Sovereign, Vaudeville Smash, Tsun, and Michelle Xen + The Neon Wild. 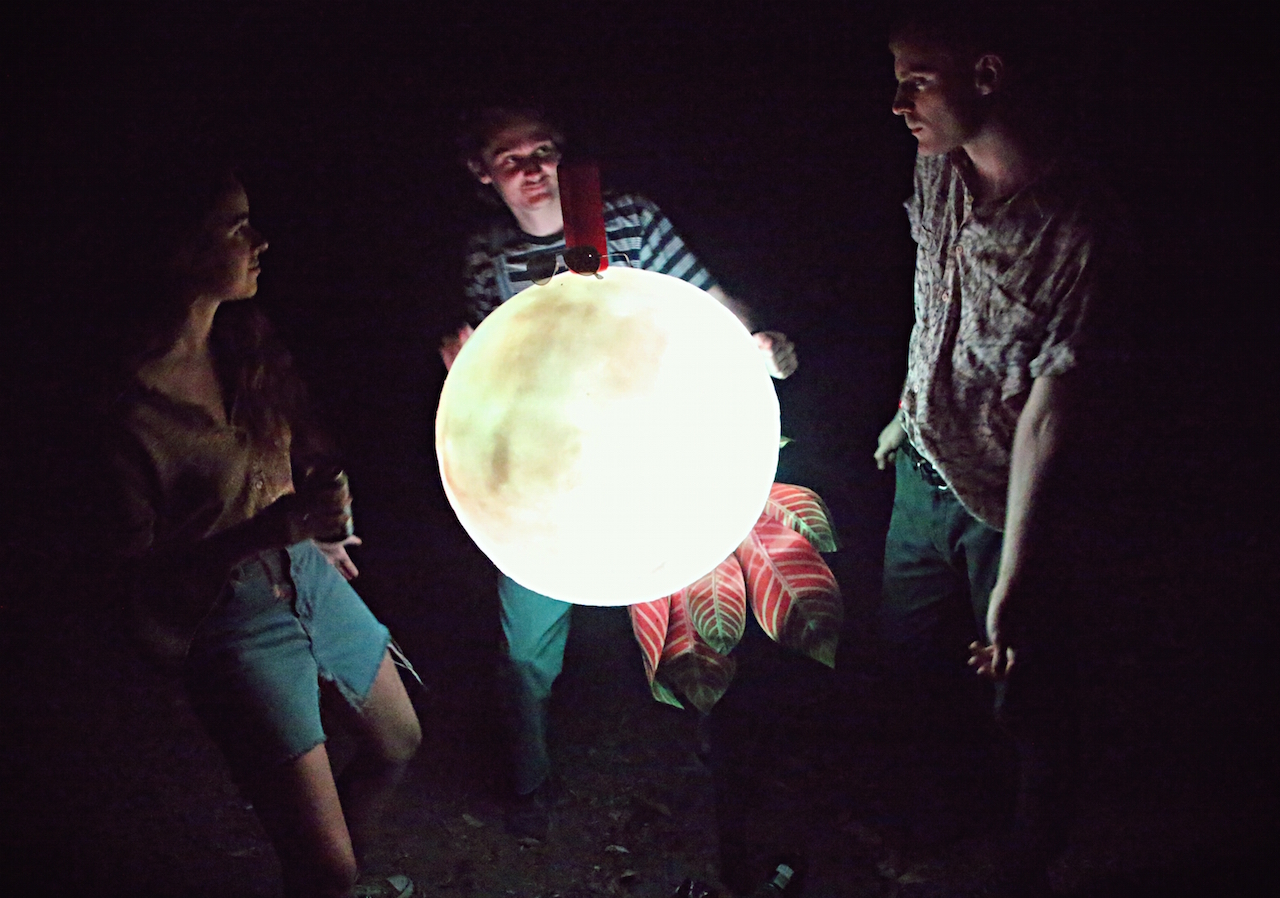 All in all, Jungle Love exceeded my expectations and shifted what I now want from a music festival. I was extremely impressed with the quality and diversity of the musical acts I heard, the abundance of relaxation activities available, and the attitude of Jungle Love’s organisers Lincoln Savage and Raymond Williams when things didn’t go to plan. Although I didn’t catch every performance, that’s what differentiates Jungle Love to the bigger Australian music festivals!

At Jungle Love you’re encouraged to embrace and enjoy the experiences that find you, rather than exhaust yourself to catch every act. I didn’t expect it coming home from a music festival, but I’m returning to the real world of cellular data as a rejuvenated version of myself who happens to have loads of awesome local artists to add to my playlists. Cheers for the memories Jungle Love, see you next year! 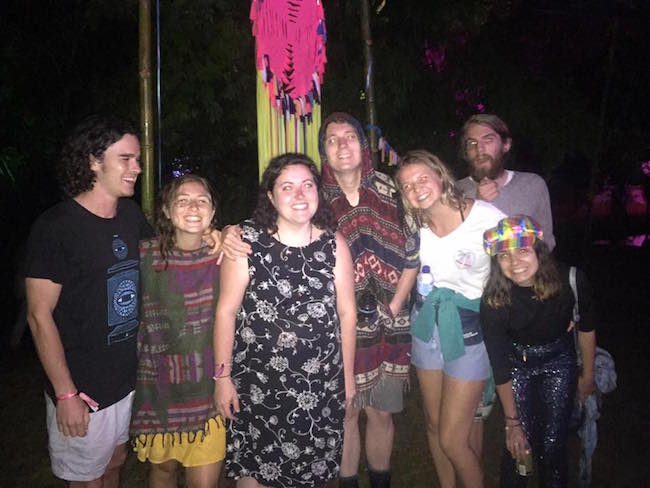