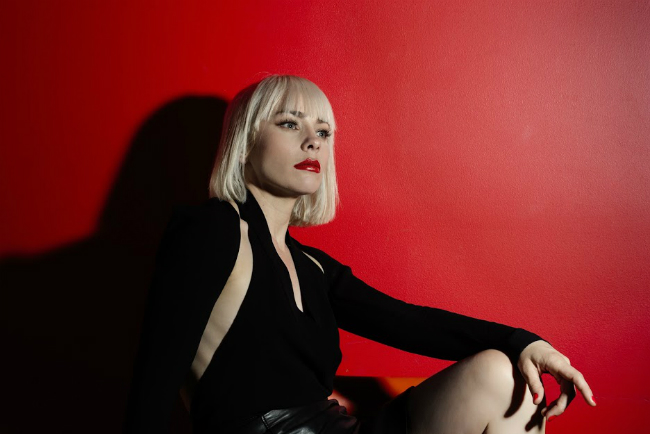 After a cold and miserable train ride to Brisbane’s Fortitude Valley, what better way to have your spirits raised than being serenaded by Melbourne songstress Olympia. The venue resembled a sardine can more than the local music stomping ground. There were gig goers standing on tables, chairs, and booths all primed and waiting for Olympia.

The guitar-slinging-bombshell took to the stage rocking her signature blonde bob and an eccentric silver jacket that later caught the attention of shrieking crowd. Olympia remained humbled and had an onstage presence that couldn’t be faulted. She constantly engaged in conversation that was off topic but entertaining, at one point asking if it was common for ‘car owners to resemble their cars?’.

“The intimacy of the gig allowed her voice to power through the venue with such grace and emotion, having the drum and bass still being absent (awkwardly) made the performance better.”

Having run into technical difficulties the songstress was left without drums for three tracks, which did not effect her sound in any way. From then she went on to perform a hair raising, solo performance of David Bowie’s Rock n Roll Suicide that left the crowd in complete awe. The intimacy of the gig allowed her voice to power through the venue with such grace and emotion, having the drum and bass still being absent (awkwardly) made the performance better.

The drums did finally return courtesy of opening act PYNES and the mood had lifted from a relaxed solo Olympia to the whole band (featuring Sarah Belknor) performing crowd pleaser Tourist. From beers being swayed in the air to the couple on my left getting a bit too cosy, Olympia had the whole crowd involved with not a stationary body in the room.

Wrapping up the show, Olympia flawlessly delivered her latest track Smoke Signals. Perfecting the chorus’ crazy high notes, she had the whole place singing (well, trying) and grooving along. All in all, she nailed it!

Olympia took us on an emotional roller coaster, from getting goose bumps thanks to her slow burners, to dancing along to her more upbeat and happy-go-lucky tunes. Olympia put on an A grade performance and had the crowd entertained from the get-go. This blonde bombshell is definitely a must see!