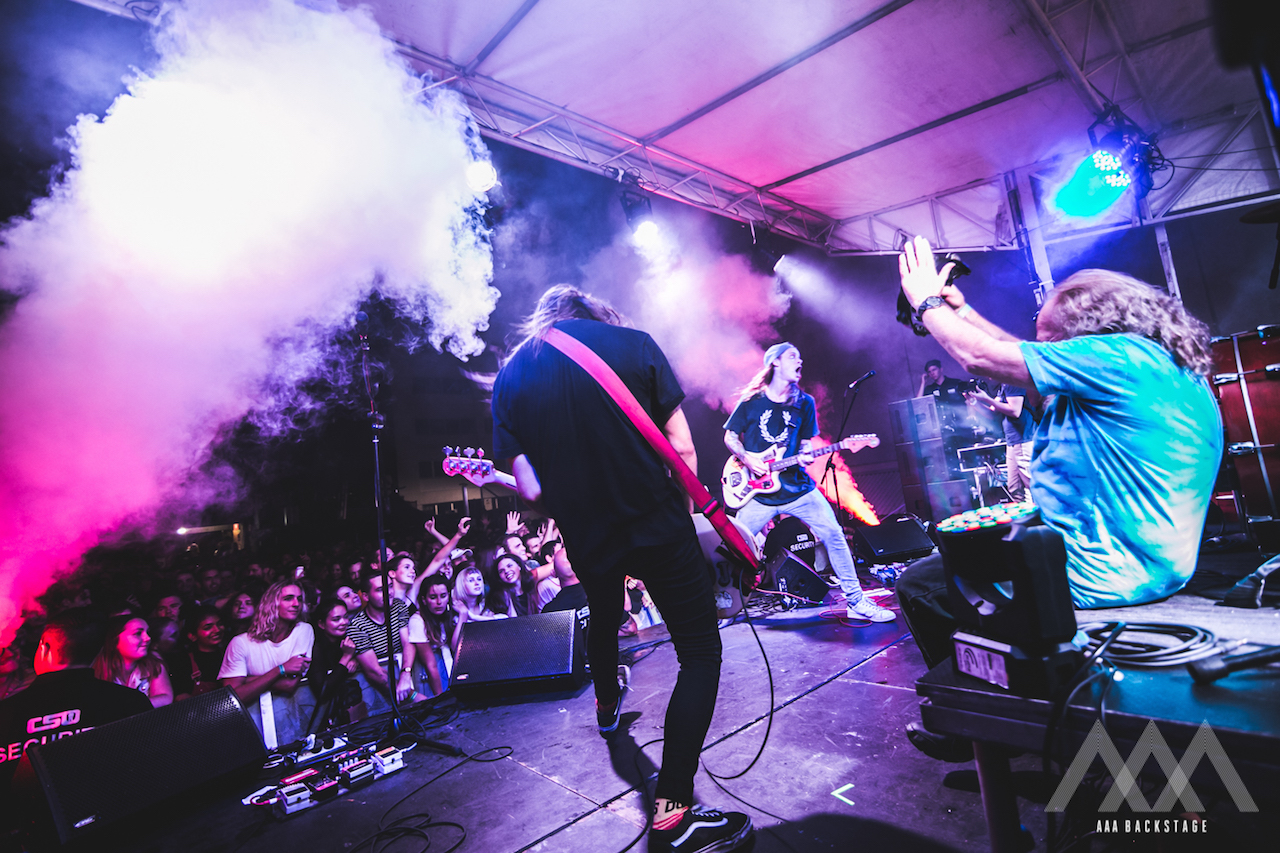 The Blurst of Times Festival 2016 really was the best of times. Named after a classic Simpsons’ line, the Brisbane music festival was spread across Fortitude Valley’s most frequented live music venues: The Brightside, The Zoo, and The Foundry. Big names like Perth alt-rockers Methyl Ethel, Dune Rats, The Goon Sax, and Kirin J Callinan featured on the line up, making it night to get your groove on. Here’s what we experienced during the live music all-you-can-fit-into-six-hours live music buffet.

The Foundry – words by Anna Saxby

Holy mullet of God. Ciggy Pop, Brisbane’s very own Iggy Pop tribute band kicked off The Foundry’s lineup with heavy tunes and heavier dancing. Fronted by Gabe Webster (The Creases), a ‘Foundry full of Brissy music fans were transported back to the glory days of Pop. Oh bless the 70s, when Iggy bopped, bounced, and bent all over the stage, and when most of us weren’t even born. Webster’s lust for life was all too evident, belting out hits like Sixteen while his belt came off and pants came down. Webster’s Iggy impersonation showed plenty of commitment (and leg).

Freshly flown in from Melbourne, Crepes caressed ears and melted hearts. Last year these beauteous boys played alongside the likes of Diiv, Fraser A. Gorman, and King Gizzard & the Lizard Wizard. Here at Blurst ’16 their trademark take on slacker-rock made for a dreamy set, with listeners swaying and nodding in blissed-out approval. If Girls and Gary Numan had a band-baby, Crepes would be it. Endearing and calm, but bubbling with synth, the 5-piece gifted a little magic unto Blurst. 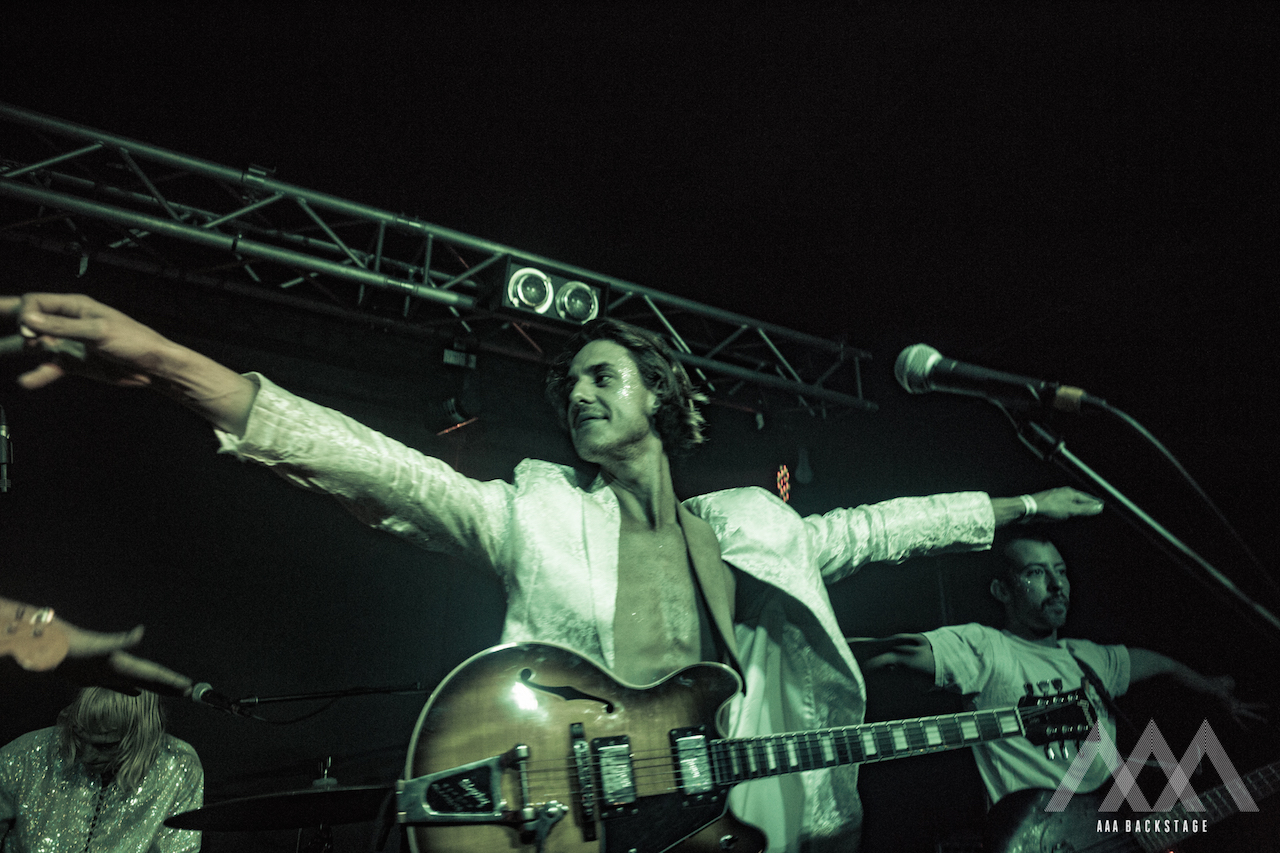 Glitter is not just for kids, okay? Moses Gun Collective rocked it on their faces, their shirts and in their hair. But that’s all in a days work for Brisbane’s most glamorous alt-rockers. Aside from whamming guitars, a ton of jungle drumming, and their signature falsettos, Moses Gunn Collective served up their set with a rather flamboyant take on everyone’s favourite dance The Macarena. While frontman Aidan Moore finished crowd favourite Shalala, his Collective filed into formation for a single-file choreographed dance routine. Could you say this Moses Gunn Collective stunt took The Foundry’s crowd by surprise? Hardly. Could you say they dug it? Yeah, they done digged it!

Kirin J. Callinan has taught us the true mark of a man is a penciled on mustache. This precious angel of death-pop blew the collective minds of his packed out ‘Foundry set. Garbed in a beat up golden leather jacket, wife beater singlet, and a Goddamn kilt, the Sydney-slacker crooned and death-growled Brisbane into another dimension. Kirin J. lives in and perhaps is his own reality. There is a charming yet leering sereneness to his performance and to his very being that you can either label as “uh, not my thing really” or “what the fuck, sick!”. With his iconic SFC tattoo visible on his shoulder and sweat beads making a slippery-dip out of his prison mullet, Monsieur Callinan concluded his set with an acappella lullaby. He sang, “I’m the toddler/No longer a baby, but not yet a boy/I’m the toddler” . No Kirin, you’re the MAN.

The Zoo – words by Cynthia Taylu

It’s an interesting dynamic attending a gig by yourself, especially a festival. You notice everything in a clear and perceptive way and it definitely lends to a different experience compared to partying with a bunch of friends. Starting my festival out at The Brightside, I could hear the buzz of people chattering and basically just catching up with old friends. What I found interesting was the eclectic mix of people. I’d unconsciously expected to find a ‘certain’ kind of crowd, and I mean this in the kindest way possible, the kind that wore bucket hats. Instead the age range varied from those in their late teens to as far as sixties and no bucket hat wearers. At this point the afternoon was slowly seeping in, so there was a comforting nature to The Brightside. It wasn’t too loud, but had enough edge in its atmosphere.

I left The Brightside after listening to a few songs by Woodboot and briskly walked to The Zoo where I was met with a stark contrast from previous venue. If you hadn’t known The Blurst of Times Festival included The Zoo you wouldn’t have even guessed there was something happening at the venue. There was less than a handful of people playing pool as I made my way inside. I also heard the bartender telling a customer she was sure the event would start late because of how quiet the venue was…

To say Bryce Schneider was great is an understatement. It takes a certain kind of musician to perform to an almost empty hall but still give so much of themselves that they place you in a daze. From the moment he walked onstage he had me, and I loved how he spoke to the audience. He took me on a journey and gave me an insight into what he was thinking when he wrote his songs. As his set continued I was pleased to see the room filling up with people. Although it wasn’t a huge crowd, you could tell that everyone was loving Bryce Schneider. As soon as Schneider finished his set you could see people rushing out to attend other venues as another crowd slowly filed in as the next set neared. This was definitely the tone for the rest of the night at The Zoo. 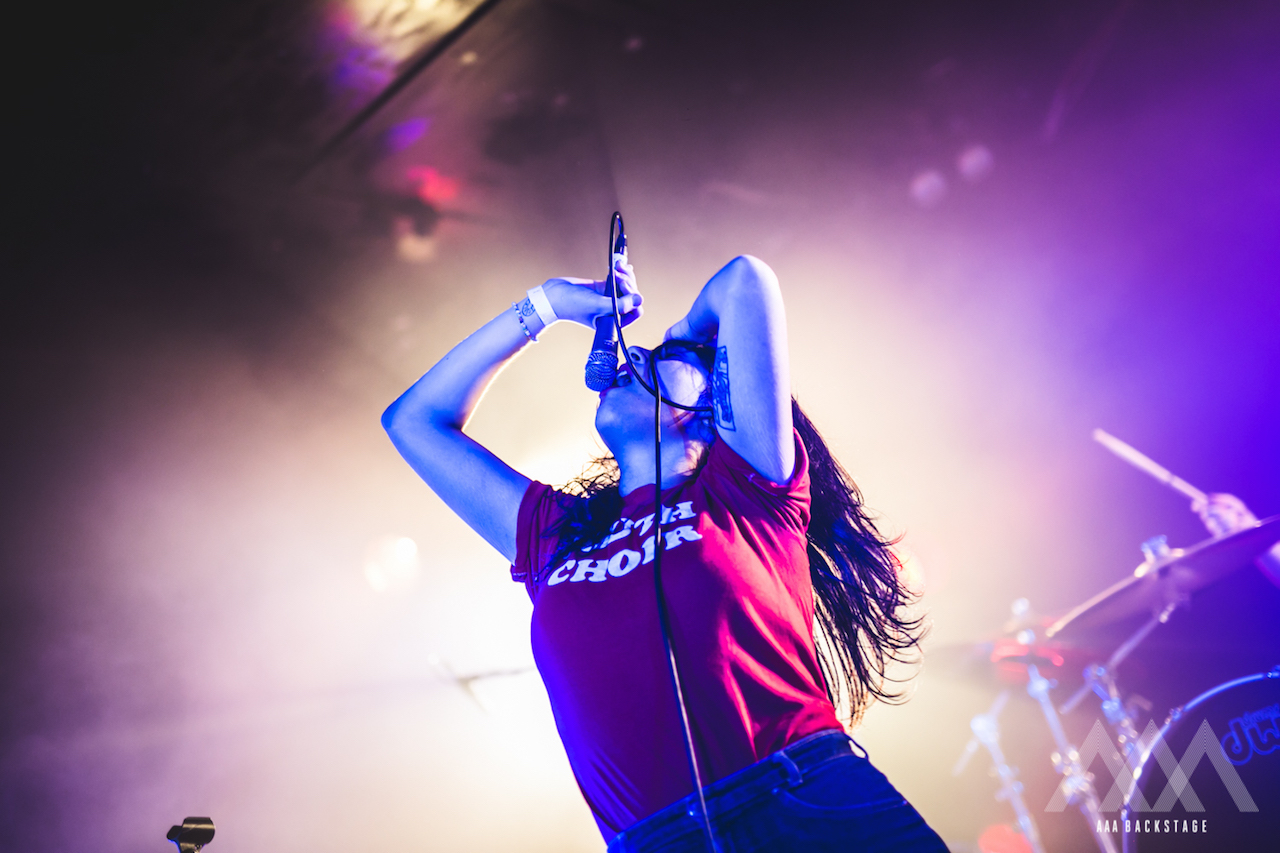 The second act, and the second standout performance at The Zoo, was The Lulu Raes. The 4-piece were fun and definitely had a light hearted feel in comparison to Bryce Schneider. Without even knowing their lyrics I found myself joining in as the crowd sang back. The music started swaying my hips from left to right until I finally caved and started to bust out my best moves. I also found it endearing how appreciative they were of people coming to see their set.

Now, I’ve witnessed hard-core rock gigs on TV, but to experience WAAX in person, well…it was very interesting! It was amazing to see how much energy frontwoman Marie DeVita expelled. With every scream, jump, and pulling at her hair the crowd went nuts as waves of moshing erupted. I’m not going to lie, it’s definitely not my cup of tea music wise, but I actually got into the hectic spirit of the set. It had something to do with the vibe and the unification of everyone letting their hair down and basically doing whatever they felt like doing.

The Brightside – words by Ashlee Minto

Whenever I go to a gig in Brisbane I don’t expect to see a commendable reception out so early due to pre-drinking. Contradicting this general rule, The Brightside Carpark quickly filled with stumbling bodies as the sun slowly set. First on stage was Brisbane locals These Guy, blessing the early revellers with their warped indie-pop. From the beginnings of a solo bedroom-based project to jamming on stage at one of Brisbane’s best venues, These Guy gave the perfect afternoon set and readied the night for fruitful entertainment.

Next up was Woodboot, who’ve been kicking ‘round Brisbane since 2014. The indie-rock band held onto old school strategies, releasing their first album ‘Krang Gang’ on cassette tape. Their sound featured thrashing drums, electric guitar, and raw lyrical execution. Alike DZ Deathrays and sometimes a little Nirvana-esque, Woodboot presented the crowd with a raw, contagious set that was great on the musical side. Despite the band’s arguably capable state, they provided entertainment for the afternoon crowd thanks to an on-verge irritating, unprepared band member. 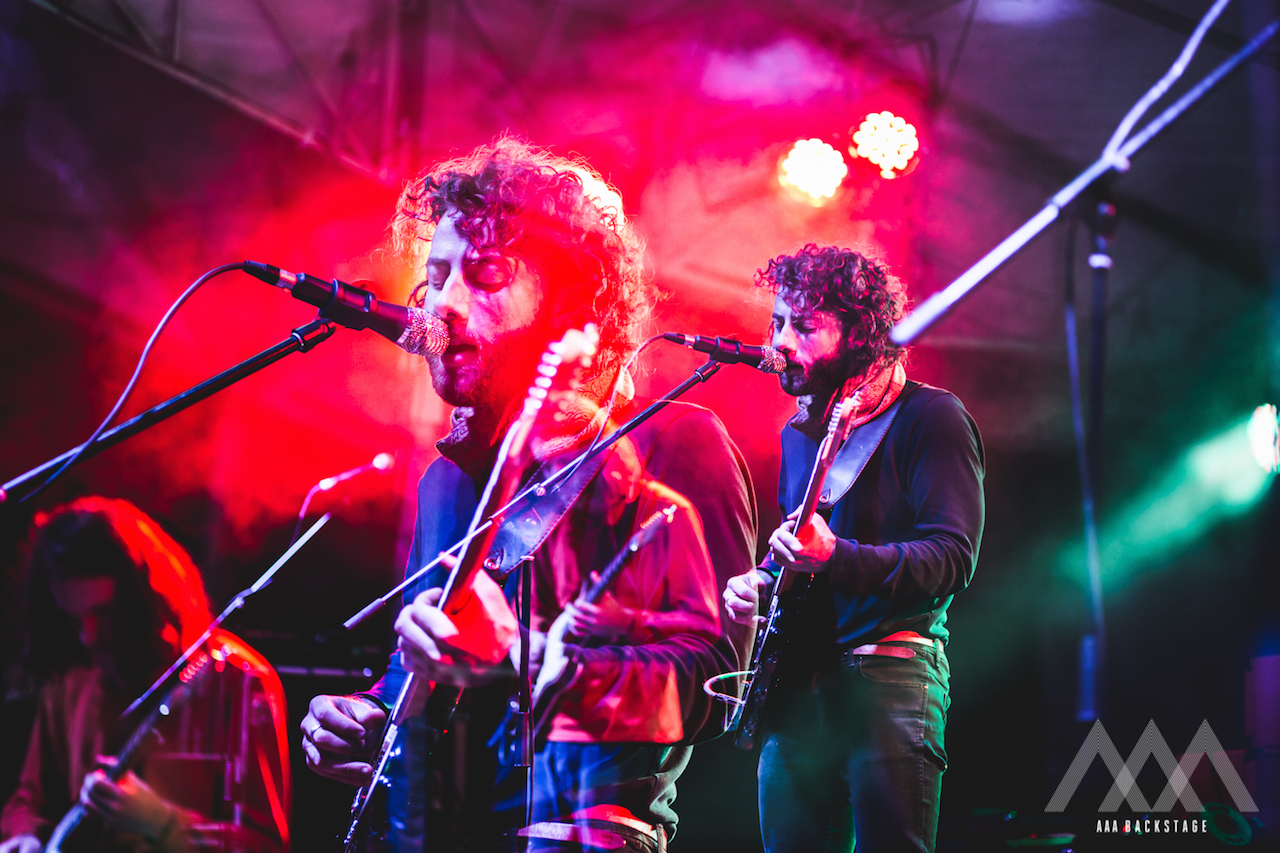 Although the 2016 ‘Blurst lineup was well-structured, it was extremely limited in regard to genre. However, one of the stand-out factors of Blurst is that although the usual thrill-seekers were out for their festival high, there was also a humbling amount of appreciation for the music going down. The punters weren’t just the regulars, there were also a heap of local and national musicians out to get a piece of the action. Even the headlining boys from Dune Rats were there early just to hang out.

Right on the fetal time of 7pm punters had already filled The Brightside Carpark to catch Twin Haus, and it progressively became more condensed throughout their transfixing set. Pre-national tour for the ‘Nothing Lavish’ EP, the local lords of ambient-rock serenaded and swooned the swaying audience with old tunes and deliciously satisfying tracks from their newest release.

The ever-growing crowd roared as current triple j stars from Perth, Methyl Ethel grooved on stage. Blooming from frontman Jake Webb’s solo project, Methyl Ethel have been quickly climbing the ranks of the Australian alternative music scene after icons like Tame Impala thanks to thier breakout single Twilight Driving. The trio blasted tracks from their 2015 album ‘Oh Inhuman Spectacle’ and the crowd became a sea of bobbing heads for Twilight Driving and Idee Fix, along with many of their other catchy chunes. Read our interview with Jake Webb HERE 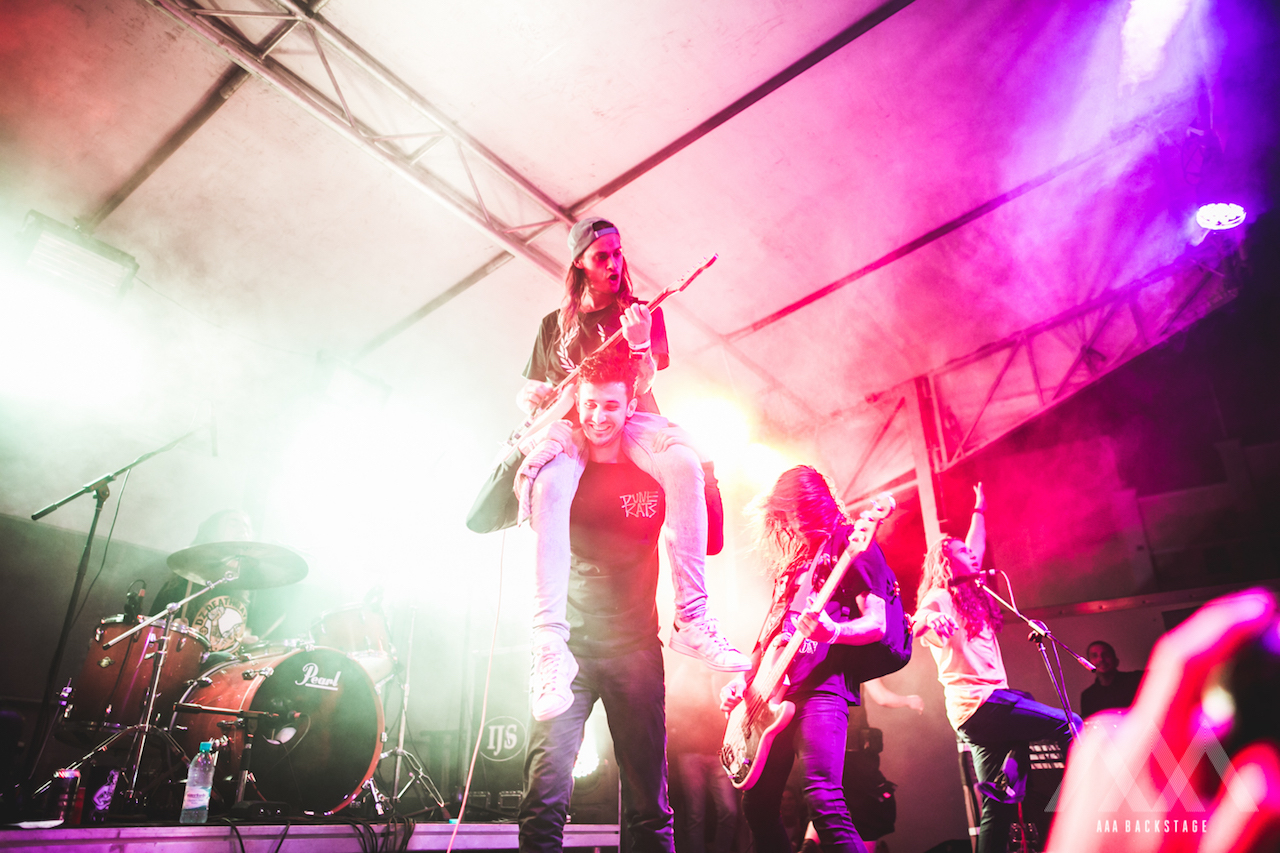 Taking to the stage, Bad//Dreems unsurprisingly ruffled a few feathers and won the best set of the night with their signature Aussie sound. The South Australian 4-piece powered through songs from ‘Badlands’ and ‘Dogs At Bay’ and their set seemed to come to an end too quickly. Ignorant of their beer soaked tees and bruise-forming jaw lines, the crowd fired up at Dumb Ideas and Cuffed & Collared, with Bad//Dreems leaving The Brightside Carpark wild but satisfied.

The time came for the ultimate headliners to take on The Brightside Carpark. Dune Rats, notorious for their rowdy as heck sets, drew in an overwhelmingly packed mosh up front, but it was noticeable they hadn’t lured in as many numbers as Bad//Dreems. Knee deep in sweat, the living sea threw themselves around to each song. Inflatables decided to join the party at the trigger of Dalai Lama Big Banana Marijuana and although the chant may be enigmatic, it all made sense to the crowd. The venue was chaos and mirrored the stage as cues were missed and a handful of technical mishaps and roadie appearances went down. Nevertheless, Dune Rats put on an outrageously energetic and fun set. Coming to the end, the boys took time out to take a quick pic with Mum on stage and said their final goodbyes for the night.

Across each of the three stages, punters and bands alike celebrated Aussie music on a colossal scale. No matter where you found yourself, whether at The Brightside, The Zoo, or The Foundry, “it was the best of times, it was the blurst of times”. Catch you next year Blursty!

Check out our Photo Gallery Pt.1 HERE and Pt.2 HERE