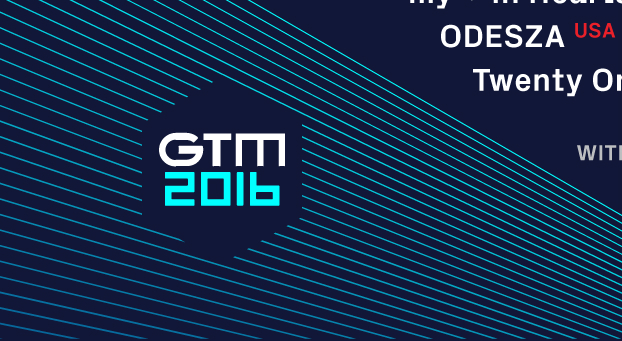 With accommodation all booked out, a sea of red and green P Plates coming from every direction, and an incredible buzz in the air, you know it’s the season for Australia’s favourite regional touring festival Groovin The Moo, and this year it kicked off where it all began in Maitland.

The whole drive along the New England highway looked as though there was a high possibility the sold-out event could turn into a mudslide. But as we pulled into the designated car park and joined others sitting on the rooftops of their cars waiting for the gates to open, the skies started to clear. After entering through the gates we took a detour over to the inflatable timetable and realised the weather was the last thing to worry about, more importantly how were we going to catch all these great acts with so many clashes? So we made it our goal to see the best that every act had to offer throughout the twelve hours of music.

Rather than getting straight into it, our day started off rather softly over at the Moolin Rouge stage with the angelic voice that is Wafia. While a voice like that is something you’d expect to see at a more intimate gig, she brought the crowd to her with her hits Fading Through and Heartburn, we couldn’t think of a better way to start GTM16!

“After entering through the gates we took a detour over to the inflatable timetable and realised the weather was the last thing to worry about, more importantly how were we going to catch all these great acts with so many clashes?”

We managed to catch the boys in DZ Deathrays parade onto the triple j stage with their beers held up high in salute to the crowd. Their tracks Less Out Of Sync begins and right on cue so do the crowd surfers. While we could have loved to catch their cover of Blur’s iconic Song 2 they surprised everyone with at the end, the heavens unfortunately opened up and we made a mad dash for somewhere dry. Our saviour was the giant canopy that covered the Moolin Rouge stage and lucky for us we stumbled upon Vallis Alps already a few songs into their set. Unlike DZ Deathrays, the duo create a more peaceful vibe that they themselves describe as acoustic electronic – in other words it’s a brief moment to chill out but there’s still enough of a beat to get your boogie on with your friends.

If you are a follower of the festival, you know that each year there’s always one heavy music band from Australia that is added to the line-up. This year Byron Bay’s In Hearts Wake were chosen to fill the spot. Opening up with Earthwalker from their album of the same name, the band played a range of old and new tracks such as Skydancer, Divine, and never before played Erase. While we regrettably missed most of SAFIA, we managed to catch the very best of their set including a cheeky play of their collab with Peking Duk on Take Me Over and their 2015 Hottest 100 entry Embracing Me.

After Vic Mensa pulled out of the tour, we were saved and gifted with the beauty of Jarryd James, one of the most highly anticipated sets of the day. While his set was sandwiched in between two acts that gave off a much higher energy level to the crowd, he did his best to gain their attention during the 40 minutes he was in our presence. Making a joke that he hoped he played a song the crowd knew (a direct hit that many only know him for his track Do You Remember?) we were treated to songs off his debut album Give it Up, Give me Something, and Regardless. But as to be expected the best was saved till last and ended with 2015’s # 7 in the Hottest 100 Do You Remember?.

“While there may only be two of them, the pair have enough energy of a 6-piece band as they fill their set with crazy jumps, air cannons, and lots of confetti.”

Having gained recent commercial radio play in Australia, there was no doubt international act Twenty One Pilots were going to gain everyone’s attention as the sun began to set over the showgrounds. Wearing their trademark masks, singer Tyler Joseph and drummer Josh Dun open up with Heavydirysoul. While there may only be two of them, the pair have enough energy of a 6-piece band as they fill their set with crazy jumps, air cannons, and lots of confetti. Highlights of their set included Stressed Out, Lane Boy, and old favourite Car Radio. However, nothing can beat the moment in Ride as Dun brought out his smaller drumkit on a platform that went out over the crowd to finish the song off.

Another act we’d prefer to catch in a smaller venue were The Rubens who followed immediately after on the Channel V stage. Everyone who was watching was exactly where they wanted to be as the band played hits off their 2015 album ‘Hoops’ such as opener Hold Me Back and The Night Is On My Side. After a cheeky crowd surf from frontman Sam Margin the band played the highly anticipated track of the whole festival, 2015’s Hottest 100 #1 Hoops.

Our night came to an end eventually and finally it was time to see Alison Wonderland closing the main stage. Her “AW” deck was front and centre as she skipped up to it and wasted no time in bleeding out the last bits of energy everyone had after a long day. Playing a selection of her songs off her debut album such as title track Run, I Want U, and U Don’t Know, we were also treated to a remix of Duke Dumont’s popular track Ocean Drive and Justin Bieber’s What Do You Mean?.

Perhaps one of the reasons Groovin The Moo continues to be a success is the way the lineup itself is carefully curated. It prides itself on being diverse and creating something that everyone can enjoy, and by not being in metro areas it gives people who wouldn’t normally get the opportunity to see these kinds of acts the chance to do so. Groovin The Moo is definitely not going anywhere and you can bet we will be back again to see it all in 2017!