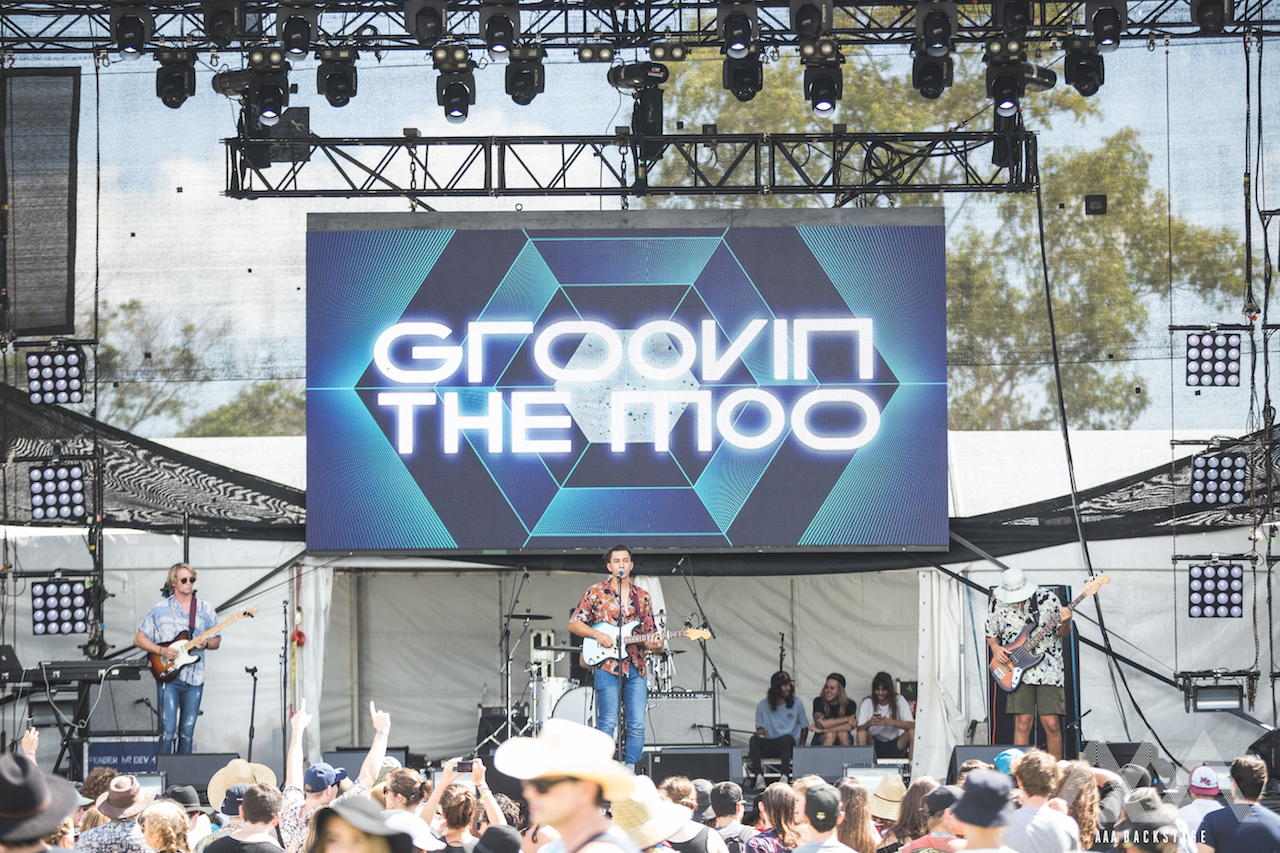 In the 30+ degree heat of far North Queensland festivalgoers gathered at Murray Sports Complex for the Townsville leg of regional festival Groovin The Moo (GTM). The Headspace tent provided sunscreen and water bottles to prepare for a day where the sun would not set for hours. While some festival-goers risked the burning UV rays of the Townsville sun, there wasn’t a spot of shade left empty.

Emma Louise played early in the day on the Channel V stage in the practical festival set-up with the Channel V and triple j stages located next to each other for non-stop music throughout the day. Louise sang out to the morning crowd with her enchanting vocals. Captivating the audience, she performed crowd favourite Jungle before reminding everyone to stay hydrated and put on sunscreen.

The boiling heat did not stop Townvillians getting into the festival spirit, with costumes of everything from an actual banana to slender-man, cows (udders and all), to super Mario and Luigi. GTM is quite a unique experience in the way it brings together such a range of different people. On one hand a bunch of goth girls filled up the main stage area constantly spinning around hula hoops, while in the over 18’s stratosphere a boy wandered around with a very practical shirt featuring six drink pockets. 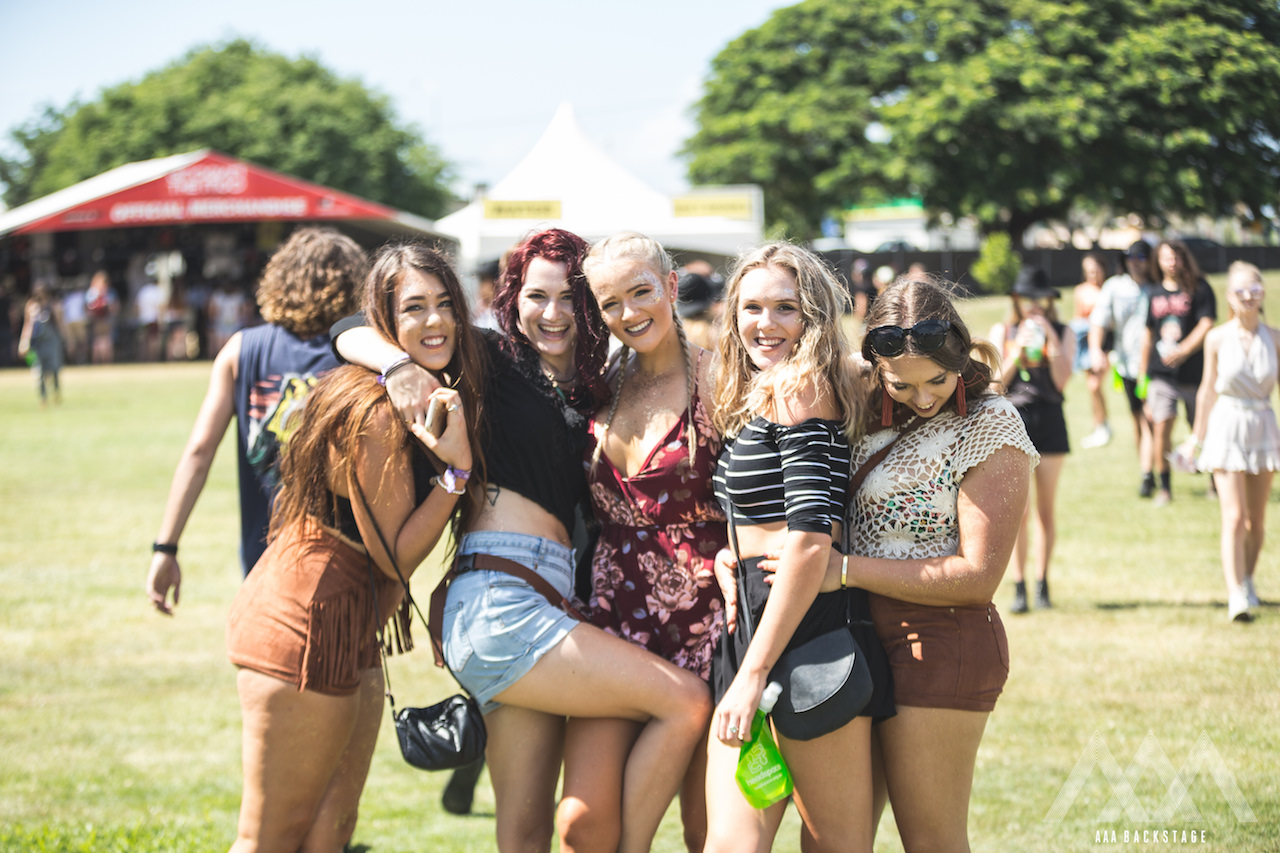 Brisbane heavy rockers DZ Deathrays played their usual over-the-top riffin’ set, including single Gina Works At Hearts and even featured a cover of Blur’s Song 2. The heavy guitars, loud drums, and rough vocals drew crowds to the main stage even at the early time of 2pm.

The crowds really started to grow as Perth artist Drapht took the stage. The rapper, who’s most well known for being opposed to having the name “Paul”, had the crowd jumping up and down as many rapped along to classic hits Jimmy Recard, Dancin’ John Doe, and Rapunzel. Drapht engaged the audiences by instructing them to raise their arms in the air, jump around, and dance throughout his fun-filled set.

Over at the Moolin Rouge stage Australian indie band British India were rocking out in a tent bursting to the seams with people. The crowd jammed along to favourites I Can Make You Love Me, Run The Red Light, as well as singing out to their cover of Rage Against The Machine’s Killing In The Name Of. 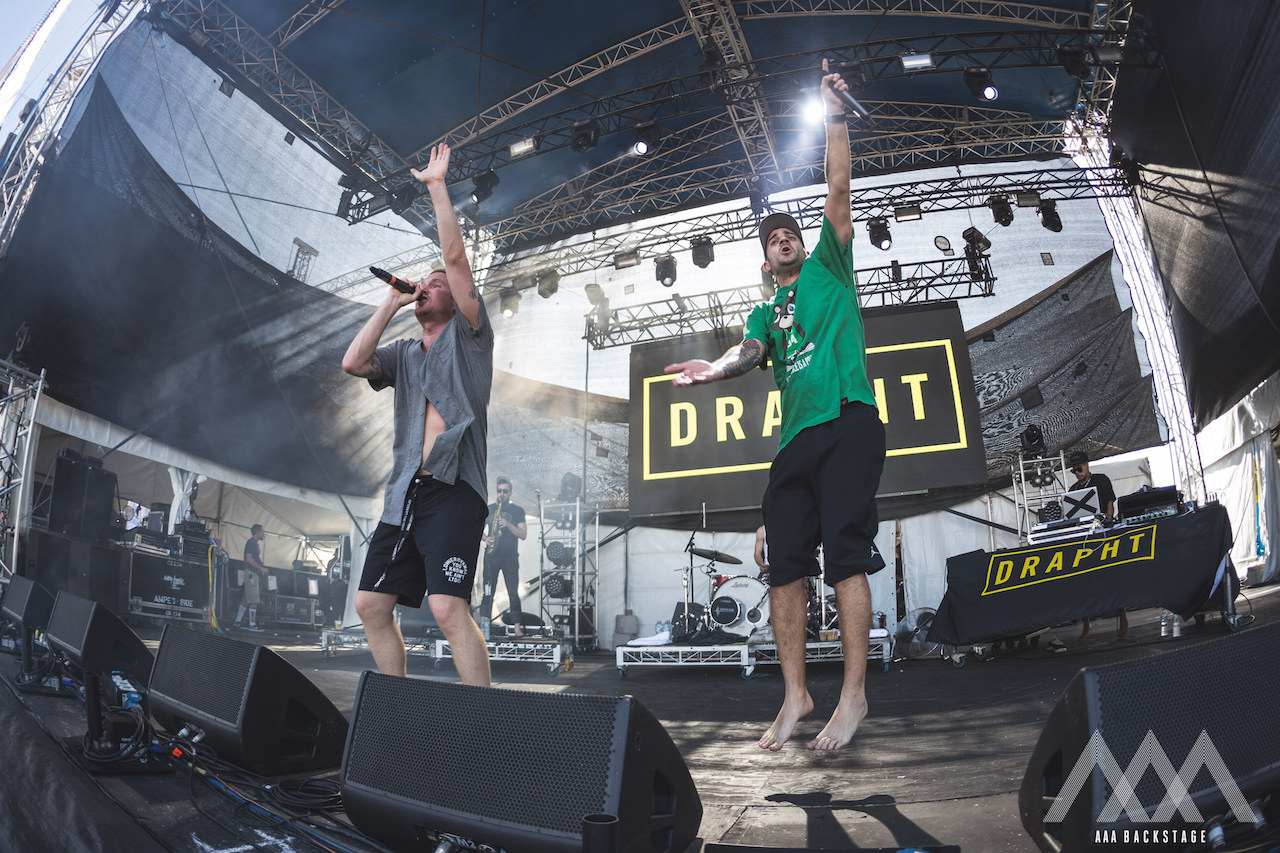 Back at the triple j stage after getting pumped up to Drapht, New York duo MS MR slowed things down with the uber talented Lizzy Plapinger dazzling the audiences with her flawless vocals.  A slow dance filled the audience as they swayed along to favourites Criminals, Painted and classic hit Hurricane.  MS MR never fail to mesmerise with their enchanting vocals and melodies.

The afternoon carried on with Canberra trio SAFIA bringing their electronica sounds to the huge outdoor audience. An inflatable killer whale made an appearance in the mosh pit, whilst the infamous #nakedsafiaman from the Maitland and Canberra legs of the festival failed to make an appearance. They performed a mix of older songs including Listen To Soul, Listen To Blues, and Counting Sheep, as well as performing their latest single Make Them Wheels Roll and previewing new song Fake It Till The Sunrise before announcing their new album is one song away from being complete.

As the sun finally started to set, Brisbane singer Jarryd James took the stage performing his soulful electronica.  The set included favourites Give Me Something and his Top 10 entry in last year’s Hottest 100 Do You Remember.  His alternative slower pop tunes gave audiences a chance to relax for a bit before getting ready for the headliners of the night. 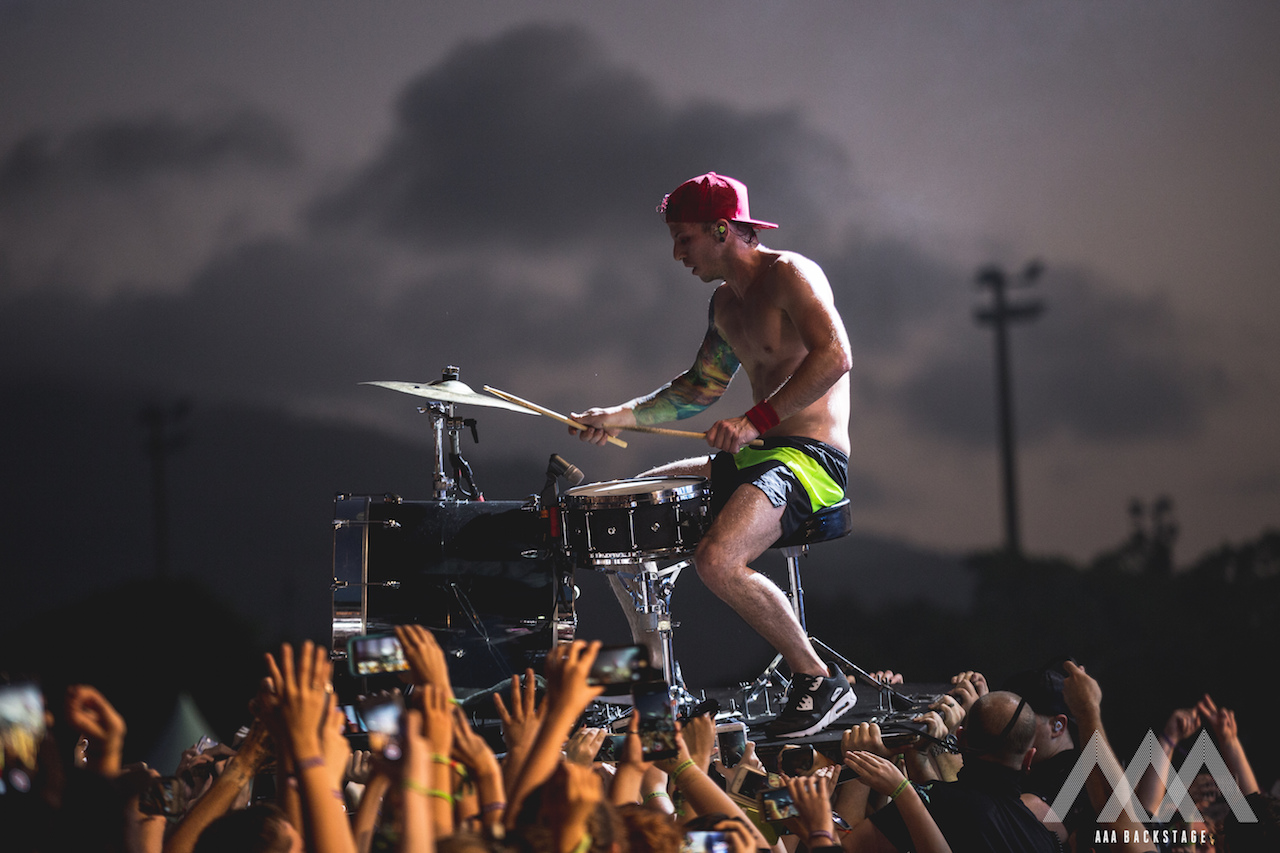 Headlining American duo act Twenty One Pilots attracted mass crowds to their hip-hop-rap-too-unique-to-label-genre set. Drummer Josh Dun sported fluorescent pink hair on the corner of the stage whilst vocalist Tyler Joseph ran all around the stage. Joseph managed to go everywhere from into the crowd to right on top of the stage while managing to impeccably rap and sing hits including Stressed Out, Ride and classics Car Radio and Guns For Hands.

2015 Hottest 100 toppers The Rubens followed up from Twenty One Pilots attracting just as large a crowd. The band entertained with a mix of new and old including My Gun and The Day You Went Away, as well as number 1 single Hoops. Vocalist Sam Margin jumped into the mosh pit and went crowd surfing on a mattress while the rest of the band played a long instrumental during Switchblade.

Back at the Moolin Rouge stage Golden Features performed their techno tunes in preparation for the final acts of the night.  Between sets the DJ entertainment had the entire crowd belting out to Shannon Noll’s What About Me in honour of the Aussie legend being snubbed from the festival, despite the campaigns to get him to GTM. 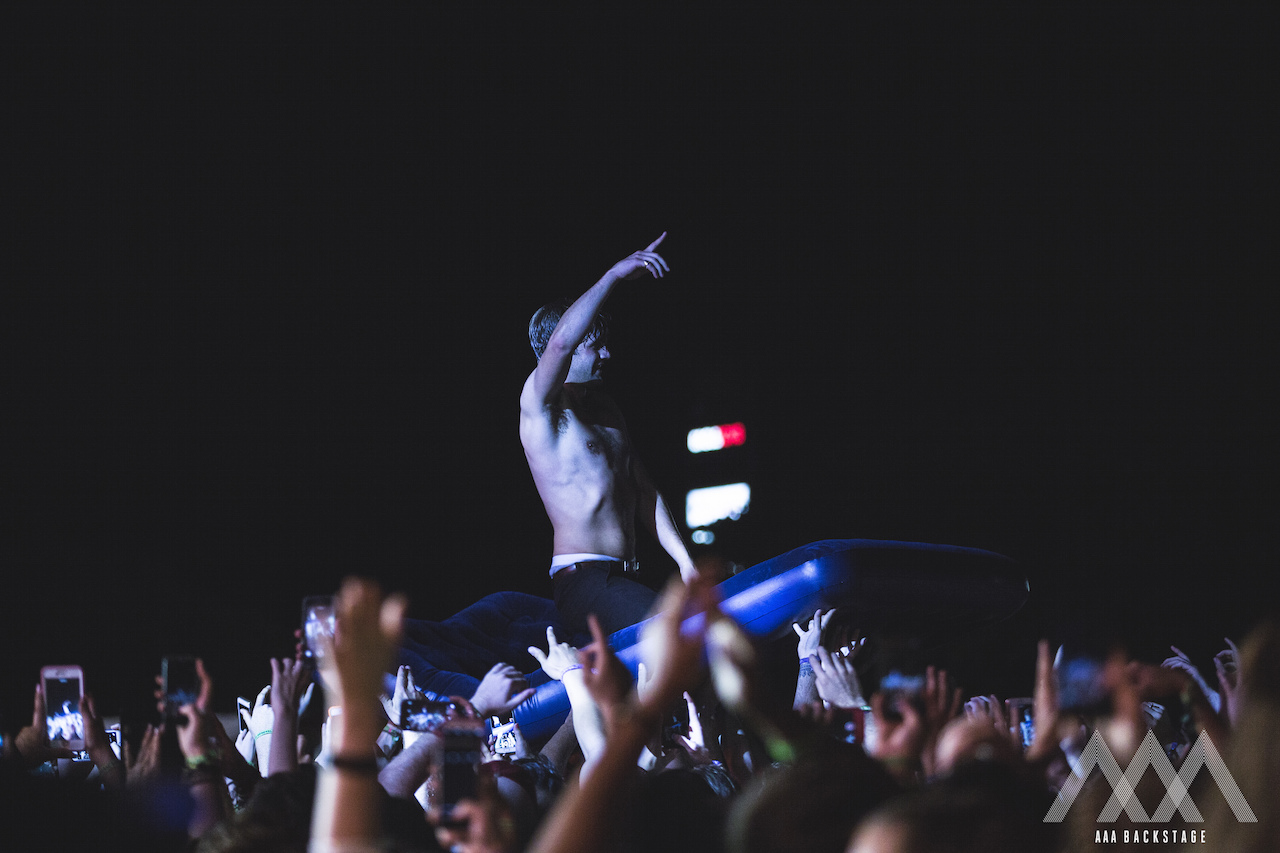 Melbourne Aussie hip hop artist Illy had mass crowds with their arms in the air as he rapped well into the night. His set included an awesome mash up previously performed for Like A Version combining Silverchair’s Tomorrow, Hilltop Hoods’ The Nosebleed Section, Paul Kelly’s To Her Door, Powderfinger’s My Happiness, and Flume’s On Top. Illy might be the only artist who can manage to gather a crowd of young and old to repeatedly chant “f*ck you” at the tops of their lungs for three minutes…

Overall GTM Townsville was an amazing experience. You can feel the sense of community from the crowd as the most unlikely of people join together for one day of hot sun, great music, and fun times. Until next year, we’ll miss you GTM!