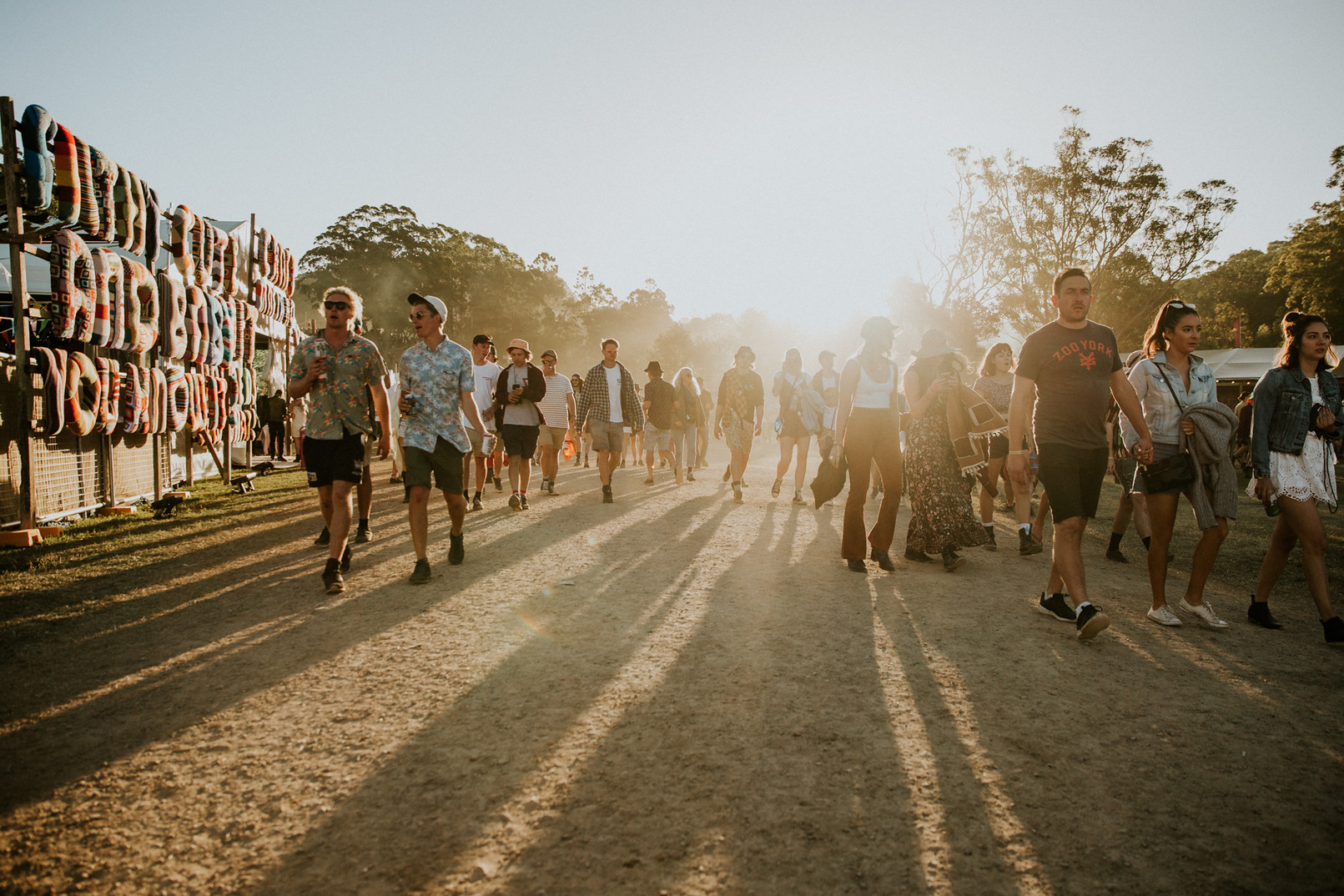 If the first day of Splendour In The Grass was an inescapable foreshadowing of the heat death of the universe, then Day Two was all about the heating things to pump up the jam! While there was a lot of electro in the mix yesterday, today seemed a day for the guitars and drums. Artists in the Mix Up stage were often electro-tinged rock or shimmery guitar pop, and in the main stage and GW McLennon, you would have the full gamut from folk to grunge and punk. Fender must have been loving the free advertising.

Early on in the afternoon, Confidence Man showcased why they’re triple j’s and Ikea’s favourite darlings, and why they’re going to be a big name in Australian pop, with some beautifully awkward dance moves that highlight teamwork choreography that hasn’t been seen since Paula Abdul’s Opposites Attract. Their first hit, Boyfriend (Repeat) had the masses getting down on command while the black veil-sporting band pulled off some synchronised shimmying.

Later on, Bag Raiders were playing an immensely overpacked Mix Up Stage to a crowd that would surely warrant a mid evening main stage posting. The fine Aussie electro pop that they were dropping was matched note-perfectly by the form and function of the moves being thrown by the crowd members, and when the final two tracks, Sunlight and Shooting Stars hit the amps, the roof nearly blew to the moon, especially with the level of meme-esque spinning thanks to the latter.

Brisbane’s Dune Rats were doing exactly as you’d expect, hitting the main stage in the early afternoon on motorcycles, surrounded by giant, inflatable tinnies and an ominous big red button labelled “do not press”. The Choonies launched into some of their classic moments, with a new type of shoey (the bottley), filthy pop-punk, and a lot of head banging left, right and centre. After teasing crowds with a snippet of Smells Like Teen Spirit, the gang launched into a cover of Grinspoon’s Just Ace, joined on stage by the song’s original portrayer Phil Jameson and Violent Soho’s James Tidswell. 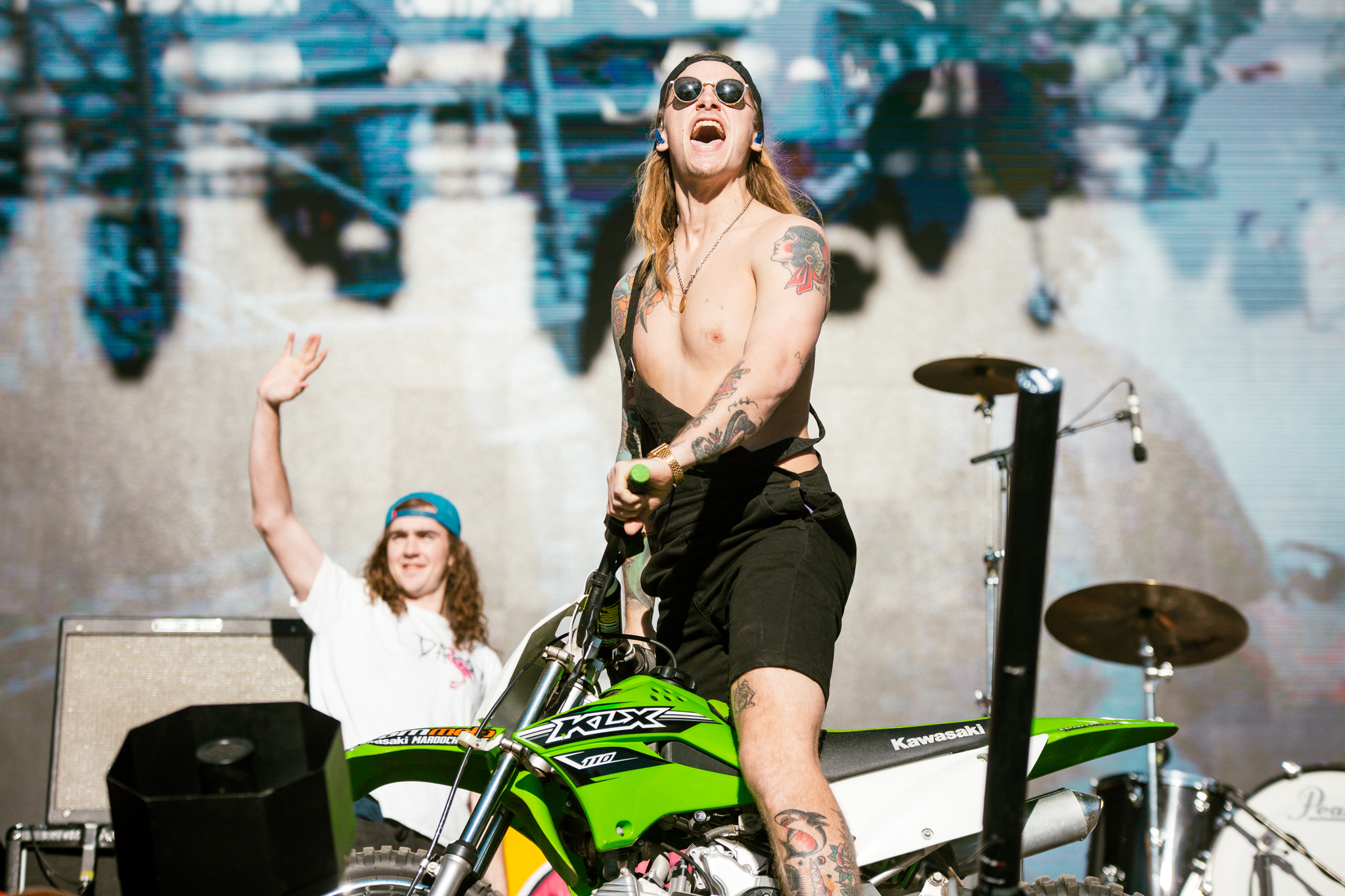 If you haven’t looked on any of your friends’ Facebook and Insta posts in the last 12 hours, Brisbane’s most euphoric sons, Powderfinger (or 4/5ths thereof) reunited on stage during front man Bernard Fanning’s set. While many were unhappy with a ‘Finger reunion so far from the glistening curves of the Brown Snake, all were chuffed to bits when the boys played two of their hits, (Baby I’ve Got You) On My Mind and These Days. 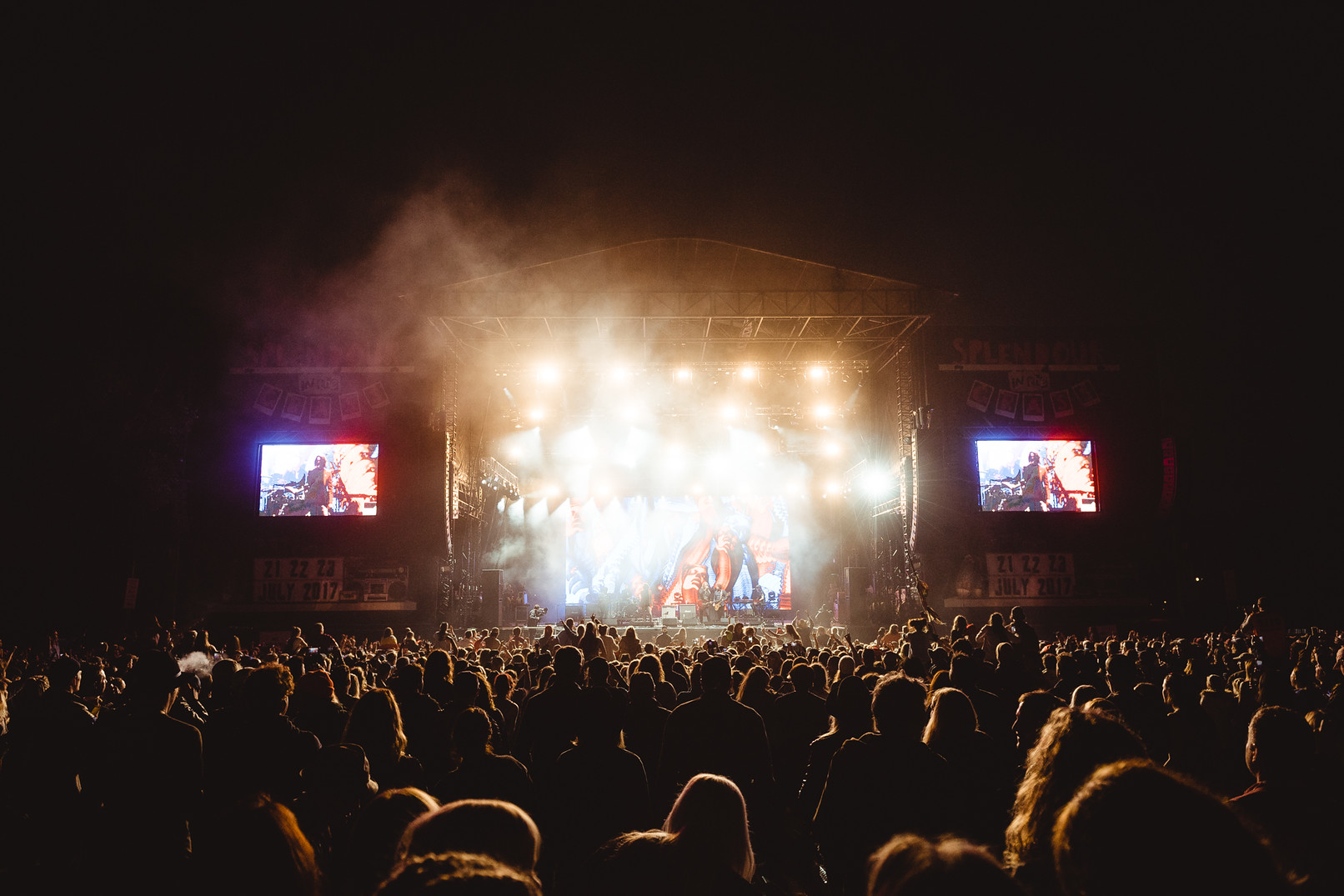 However, that was only a slice of the excitement for Fanning’s set, which also featured his own huge hits, such as Songbird and Wish You Well, alongside material from his latest album, this year’s “Brutal Dawn”. Fanning is a man who knows that his presence on stage draws in any and all in the crowd, and his set had a great spread of his work, and his many styles that would have satiated everyone. Unfortunately, we weren’t treated to any Sunsets at the appropriate time.

For their triumphant debut after pulling out of 2015’s iteration of the festival, UK’s Catfish and the Bottlemen really didn’t end up needing to do that much work – the crowd had them covered. While they were laying down huge tracks like 7, Kathleen, Soundcheck, and Cocoon, the alt-rockers could have turned off their vocal mics and just strummed, because the sea in front of them were hungry like a Florida bath salts user for a Bottlemen sing-along. In the times when they were audible over the crowds, Catfish had it. It seems that the early evening slot is the place and time to be in the Amphitheatre each and every night.

In another recovery from having dropped the ball in 2014, Irish indie rockers Two Door Cinema Club closed out the Mix Up stage with some of the most energetic and upbeat sounds all weekend. Many were calling it the highlight so far, as the trio turned into a postal service to deliver a set filled with all positives. The accompanying light show that came packaged like a Price Is Right (it’s a game show, get it?) holiday prize kept everyone entranced, and when it had all wrapped up, there wasn’t a still foot in the tent!

Queens of the Stone Age were there.

If you want to catch up on our Day 1 coverage, click HERE

“I lost my jumper in the mosh pit, so I stole this one. Not from a shop; from a person, and I feel that the universe will even it all out in the end” – Bus punter