The Lowdown On The Uni Social @ Mo’s Desert Clubhouse 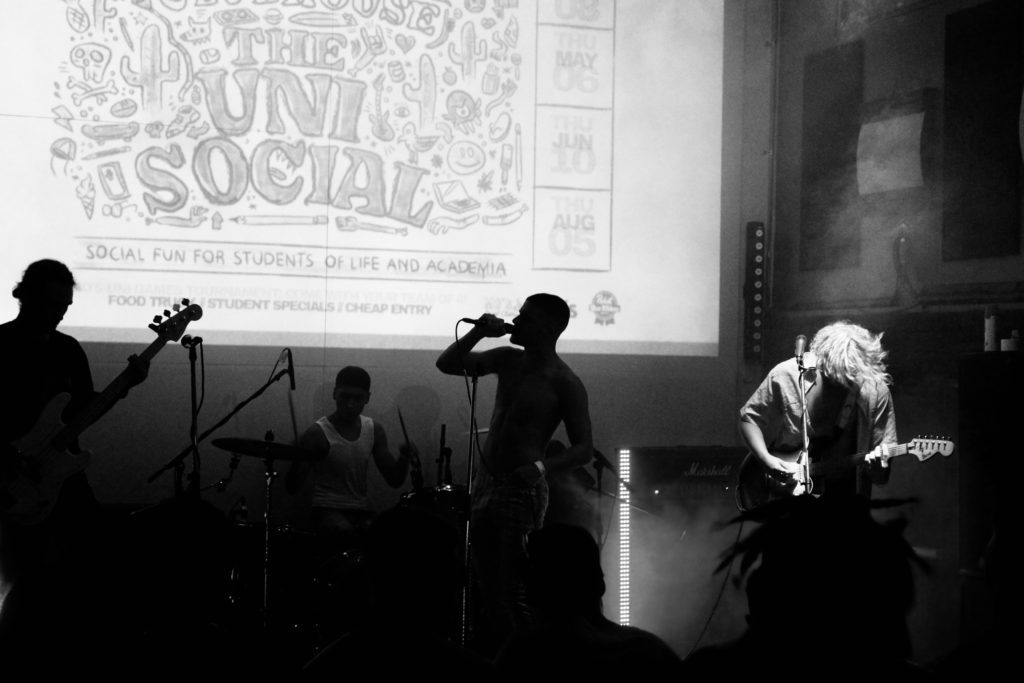 Mo’s Desert Clubhouse recently launched The Uni Social, an initiative for students to gain valuable experience in the music industry, while putting on a string of fun-packed live shows- all welcome to attend.

We attended the inaugural event last Thursday and were super impressed- explosive live music, a sick beer-pong championship played between sets (which btw, I won), cheap drinks and a tasty food truck meant it exceeded all expectations. There were students all around training on lights and sound, photographing, performing and attending, creating a super cheerful, welcoming atmosphere.

The good times began with a pumping set from Common Concept DJs to kickstart the vibes, followed by Sunday Sesh Band making their live performance debut. The crowd was bouncing off the walls during their set, forming a wild, thrashing mosh pit that reflected the wicked energy of the boys onstage.

Sponsors Frïs Vodka and Pabst Beer kept the cheap drinks flowing, and after sweating it all out on the dance floor the high-spirited crowd were keen to embrace the $5 ‘Shit Tins’ on offer. After some more rounds of beer-pong, it was time for the talented Local Safari to take to the stage. Their setlist was studded with fan-favourites, ‘Daffodil’ and ‘Millenial Generation’, unreleased treat ‘Felicity’ and incredible covers of Lime Cordiale’s ‘Inappropriate Behaviour’ and Spacey Jane’s ‘Booster Seat’. To top the night off killer Common Concepts DJ Jack Linton took to the stage again to deliver another all-time hype set, sending the crowd off with the sweet sounds of nostalgic throwbacks mixed with modern bangers.

RELATED: THE VANNS HIT THE ROAD ON A MASSIVE TOUR IN CELEBRATION OF NEW SINGLE. READ HERE

While the show itself was amazing, we wanted to dig a little deeper into the conception of The Uni Socials so we spoke with Jaya Ruzans, Mo’s resident young gun spearheading the training initiative, to get all the deets.

The first instalment was an absolute success- such a fun night!! What’s in store for the next round?

The opening night for the Uni Social was absolutely a success in our eyes! In store for next month’s event we have a new group of students taking part gaining practical experience running a live music event.  We’ll have another competition for groups of students to compete in, all I can say for now is there will be a catwalk… We have some more local talent entertaining the crowd, and our sponsors Frïs Vodka and Pabst Beer allowing us to keep the $5 drinks flowing.

What motivated you to create The Uni Socials?

I was so lucky to get an internship at Mo’s, I wanted to give others the chance that I got. This series gives the next generation of the arts and events industry up-and-comers the opportunity to put some work experience on their resume, and hopefully that lands them their own dream job in the future.

Did you find there was massive interest from students wanting to participate with the behind the scenes work? How many people have gotten involved?

I had an overwhelmingly positive response from students wanting a spot on the team. We have 16 students, studying a range of areas from production, media, marketing, events and more, all taking this project on very passionately.

Do you plan on hosting The Uni Social again once this run of dates is finished?

We at Mo’s have high hopes for The Uni Social to become a resident event. If the rest of these events have interest as high as the first, we’ll look to holding more, possibly more often- which will create more opportunities for students to get that practical, hands-on experience that is so vital to this industry.

Check out the gallery from the first instalment & see below for the dates of the next three Uni Socials at Mo’s- be sure to get your hands on the $5 tix while you can!