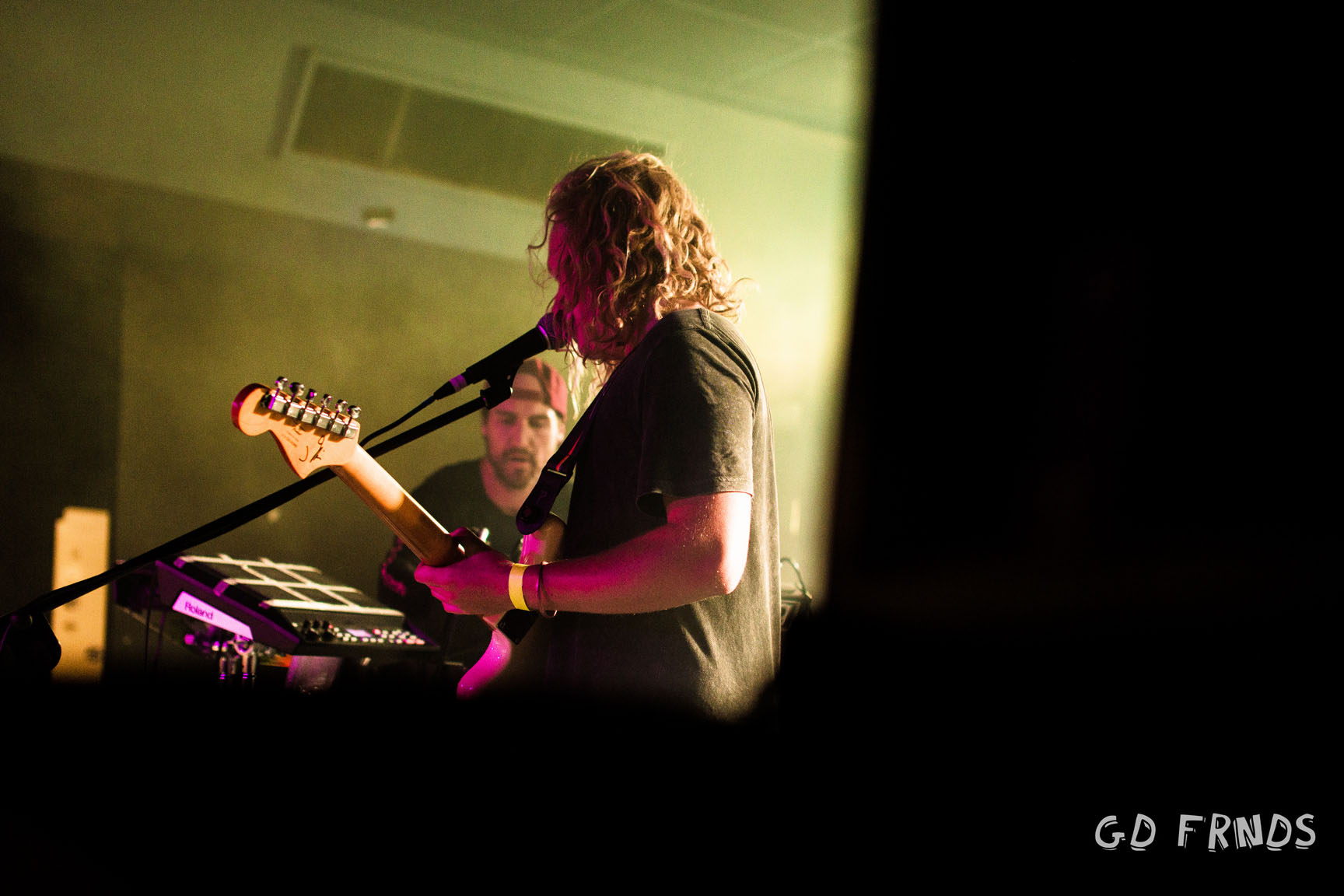 If you haven’t already seen Nocturnal Tapes, you’re doing yourself a big disservice. The duo, from Yamba, are one of the most versatile and dynamic live acts going around at the moment. They’re playing AAA Backstage’s Birthday Bash so we asked Lachie and Harry about their developing new demos, interchanging ideologies between the studio and the live stage and their best birthday memories.

I know you guys have been working on demos, recently. How are the new ones coming along?

Really good. We’re stuck it them and can’t wait to get them out. Starting to go in a bit of a new direction. We’re really excited about that. There’s more live elements—more bass, guitar, real drums, mostly. I’m not going to put out there exactly what it’s going to be yet. Leave it as a surprise. There’s definitely a new direction happening.

Have you ever tried working with live drums before? How’s that going?

We’re still using mostly sampled live drums, and discarding them out, and doing a lot of things with strings and horns as well, but all real samples rather than synthesized ones.

How much experimentation and improvisation comes into play when you’re in the studio? What kind of ideas eventuate from that?

We usually work individually and come up with some ideas, then swap between tracks and a lot of the time we haven’t really jammed on new stuff for a little while. We started doing that when we first became a group, but we’ve changed the direction of the production workflow. It’s more, at the moment, trying to get that song structure down, individually, and going from there.

I think, when we started, we were purely a live act, there was no recording. For pretty much the last year, we’ve been almost individually learning and teaching each other different things in production, and now we’re getting back to that stage where we want to start jamming, and writing things like that.

We’re talking the other day about the improvised thing. It’s really important in the live show. That’s where, at an electronic show, you have to have certain structured elements, but we find the improvising live is the funnest part. We’re trying to make sure, in every song, there’s as much of that as we can get in there.

Do you see yourselves at two different bands? One, on the live stage; the other, in the studio?

We definitely try to capture the essence of the song in a live set, but we want to take it to the next level in a live show. It’s the thing where you’re trying to push it, so when people see it live, they think it’s better than the studio recording. I think that’s every artist’s dream to get that. They definitely get a little bit extra when they come to the show. For sure.

Would you guys call yourselves perfectionists? Do you have to set yourselves deadlines, so that you have to release something, otherwise you work on it forever?

We do have some deadlines. We’re going to get some things done. At the moment, we’re chasing the right songs. We left ourselves open until it’s done—definitely more freeing, in letting that happen rather than going, “We need to make a great song this week.” Creative juices are definitely flowing when you’re not stressed about having to make a song in a certain amount of time.

At the moment, we’re pretty much doing a new demo every day. It doesn’t feel like you have to get stuck into finishing one. You can keep the fresh ideas rolling out, and then we’ve got a big back catalog that we can grab whenever we need songs.

The tour this month, are you road testing songs, or is it a chance to get yourselves out of the studio, back on the road, then back into the studio afterwards?

There is a couple road test songs that are in there, but generally, it’s trying to get back out on the road and then get back into the studio. With the amount of songs we’re making at the moment, I think when we do release a new single, the live show will be all brand new, pretty well.

The live show that we’re going to see now, is it kind of similar to what everyone was seeing back in December?

Yeah, mostly. There’s one, maybe two that haven’t been released, so if you haven’t seen the live show, there is something new. We have played everything that we’re playing now, sort of three months ago.

You guys are playing AAA Backstage’s Birthday Bash, which is going to be sick. What are some of your favourite birthday moments in your past? Or maybe even some of your worst birthday memories?

One of the birthdays I had at my parent’s place, and I got a bit excited. I had a huge group of people there, and I decided to climb up onto the roof and stage dive off my parent’s roof, and lucky, there was enough people there to catch me, but it was one of those rockstar moments—jumping into a crowd of people.

Nocturnal Tapes are playing AAA Backstage’s Birthday Bash—Friday 27 April at The Flying Cock, Brisbane, alongside K.I.M (The Presets), WHARVES, Eliza & The Delusionals and more. Tickets are on sale HERE. 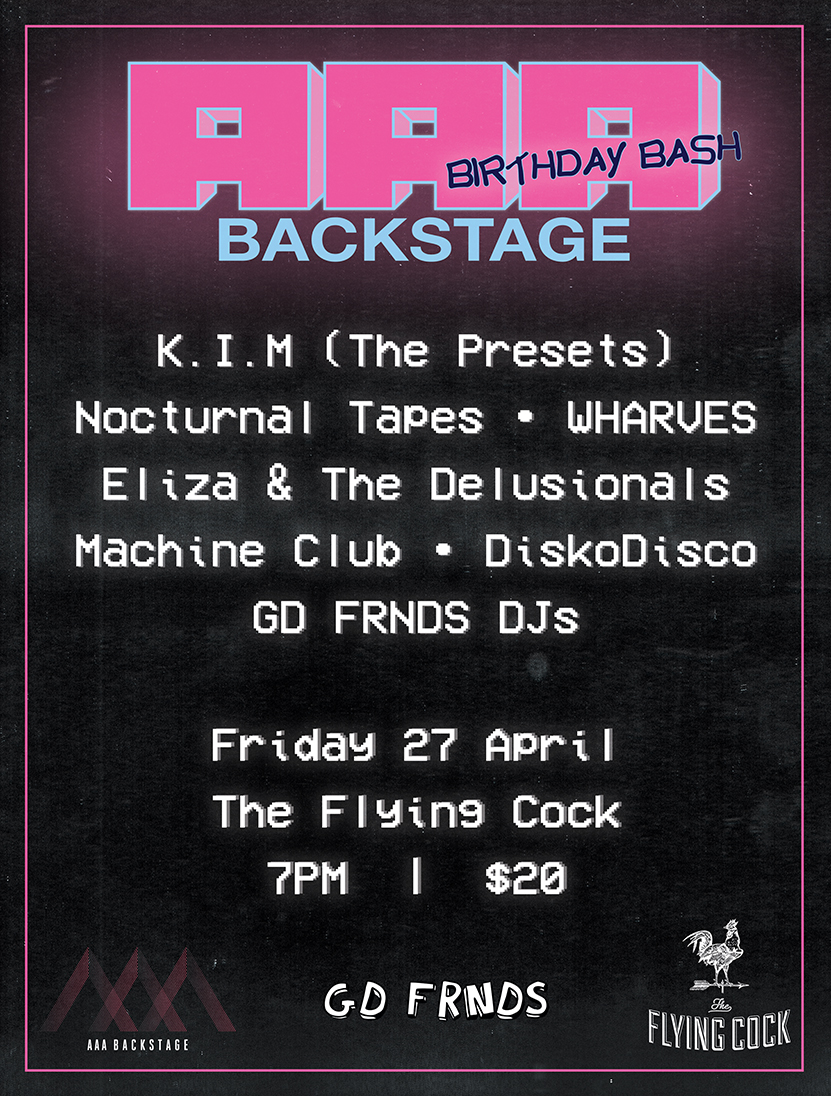